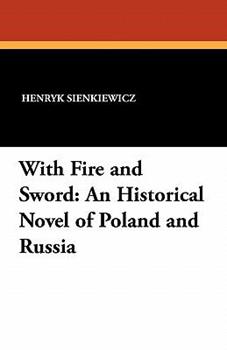 With Fire and Sword: An Historical Novel of Poland and Russia

Henryk Sienkiewicz (1846-1916) received the Nobel Prize for Literature in 1905 "for his outstanding merits as an epic writer" including his Trilogy, of which With Fire and Sword is the first volume, and Quo Vadis.

Published by Thriftbooks.com User , 16 years ago
Ask around a bit and you'll find no shortage of folks, men in particular, who became readers via their encounters in youth with class adventure tales: The Three Musketeers, The Count of Monte Cristo, Ivanhoe, the Lord of the Rings, etc. ask again and you'll find almost no one whose heard of half the Nobel Laureates in Literature, fewer who've read them, and none enjoyed many of them. All the more remarkable then that one of the great adventure authors of all time actually won a Nobel and somewhat tragic that so few have read him in recent decades. But Henryk Sienkiewicz has made something of a comeback and it could not be more welcome. Sienkiewicz is the great author of Poland--indeed, to some extent his works are said to have created and helped to maintain the strong Polish identity that prevailed through the troubled 20th Century. When his books were first published -- mostly late in the 19th Century -- the English translations were done by Teddy Roosevelt's friend Jeremiah Curtin and, whether they were adequate for their time, they are are terribly dated now and have served to put off potential readers. Add in the fact that neither the Nazis nor the Communists had much interest in fostering Polish patriotism and you've the recipe for lost classics. But then, fittingly as the Iron Curtain was crumbling, Hippocrene Books commissioned a new translation of his greatest works, The Trilogy and Quo Vadis?, by the highly-regarded Polish novelist W. S. Kuniczak, and these eminently readable versions won Sienkiewicz a modern audience. New translations of other works followed, then a terrific film version of In Desert and Wilderness, and a massive Polish television adaptation of the Trilogy. Suddenly we've a surfeit of riches and some catching up to do. If you're just starting out it might be wise to begin with Quo Vadis?, a stand alone tale of Christians in Rome that really deserves a fresh film treatment. But it's well worth your time to dive into the Trilogy, the first volume of which is the magnificent With Fire and Sword. Set in 1647, amidst a Cossack uprising against the Polish-Lithuanian Commonwealth, it tells the story of a young Polish patriot and hero, Yan Skshetuski, and his love for the beautiful Helen, who is also coveted the brutal Bohun, who fights with the rebels. Pan Yan's twin tales give us epic history and grand romance, while his compatriots offer comic relief. There's his wily servant, Zjendjan, whose semi-faithful service somehow keeps lining his own pocket. There's the mopey giant Pan Longinus, who has sworn a vow of chastity until he lives up to the example of his forebears and takes off the heads of three enemy soldiers with one swing of his massive battle sword. There's Pan Michal Wolodyjowski, whose bravery and feistiness belie his diminutive stature. And, best of all, there's the Falstaffian Pan Zagloba, who makes up in drinking capacity, gluttony, and biting wit what he lacks in zeal for battle, as he keeps his one good eye

A great book, but the translation could be better

Published by Thriftbooks.com User , 17 years ago
I've read Kuniczak's translation of the Trilogy and greatly enjoyed it. It was my introduction to Seinkiewicz. However, while reading it, it seemed somehow incoherent, like something was missing. It also seemed impossible that the companions of Zagloba would be so credulous of his boasting.I went and found a copy of the 1890 translation of the Trilogy by Jeremiah Curtin. What a difference! Though the language is somewhat archaic, the story flows so much better and the character of Zagloba is much more believeable. There is more context to his antics, and his companions are presented as far more skeptical of his boasting, making the story much more realistic.Kuniczak seems to have omitted and simplified much that appears in the Curtin translation, to the detriment of the story. Many believe the Kuniczak version is superior, and maybe it is more accessible, but I recommend you find the old editon in the basement of the local library and read it first.

From the viewpoint of Ukrainian

Published by Thriftbooks.com User , 19 years ago
In my country this book is considered offensive both by Ukrainian majority and Russian minority. Polish people are viewed by Ukrainians as occupants, slavers and religious opressors. Cossacks are Ukrainian national heroes and common people still sing traditional songs about "brave Cossacks" and "foul Poles". The huge statue of Hmielnitsky stands on the central square of Ukraine's capital Kiev. If you have watched movie "Braveheart" about civil war between English and Scots, you will understand the position of Ukrainians - they are brutal and violent and barbaric just like Scots but they enjoy freedom and hate overproud dominant Poles who are like English. However I like this book - it is interesting as a great Polish mythical tale with great descriptions and memorable characters. I have an advise to fans of this book: watch the great Polish/Ukrainian movie "With Fire and Sword", which made a lot of noise few years ago and provoked clashes between Polish and Ukrainians nationalists. Also you should read the "opposite view book" written by Ukrainian writer Nikolai Gogol called "Taras Bulba". "Taras Bulba" is a must-read book in Ukrainian and Russian schools and it tells the story about war between Cossacks and Poles from Ukrainian perspective.

Published by Thriftbooks.com User , 23 years ago
I concur completely with the wildly enthiastic reviews above. Reading "The Trilogy" was one of my greatest reading pleasures (and finding the two-volume "The Deluge" was one of my greatest reading adventures). This Polish national epic has it all, fascinating and important history, adventure, romance, memorable and delightful characters and great humor. Those of my highly literate friends who stopped rolling their eyes at the massive length of The Trilogy long enough to read With Fire and Sword accused me of ruining their vacations. They too could not put it down, despite their wives' entreaties. These are truly magnificent and significant works, but they are also enormous fun to read.

Back In Print at last

Published by Thriftbooks.com User , 23 years ago
I fell in love with this series 30 years ago as a college student after having first read "Quo Vadis" in high school, as well as "The Deluge" as a Classic Comic Book. One should note that Sienkiewicz was awarded the Nobel Prize for literature, in great part because of the achievement of this great trilogy. I also read "The Teutonic Knights" at the same time, and would recommend this tale as well. One thing that always intrigued me in my original reading was that the translations were done by Jeremiah Curtin in Costa Rica in the early 1900's. In my mind, I wondered at the thought of someone named Jeremiah living in Costa Rica at the turn of the century translating Polish novels into English.
Copyright © 2020 Thriftbooks.com Terms of Use | Privacy Policy | Do Not Sell My Personal Information | Accessibility Statement
ThriftBooks® and the ThriftBooks® logo are registered trademarks of Thrift Books Global, LLC