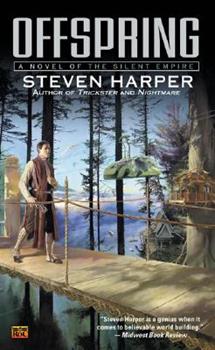 (Book #4 in the The Silent Empire Series)

The Dream was a telepathic place of existence where a psychic race known as the Silent could twist the laws of reality. But a madman's lust for power has torn the Dream asunder. Now, only a handful of the Silent can enter it. Kendi Weaver is one of them. And it is up to him to protect it as political and personal enemies line up against him.

Cram packed with plot and sub-plot

Published by Thriftbooks.com User , 13 years ago
Offspring (I think it was originally going to be titled Children) picks up shortly after the return of Kendi and his crew after having rescued Keith and Martina from enslavement. Kendi and Ben plan to start their family using the batch of embryos from which Ben himself originated, but of course there are a few complications. An election is impending for governorship of their home planet Bellerophon, and Kendi and Ben are inevitable involved. During the campaign attempts are made on Kendi's life, there is also a series of kidnappings of both Silent and non-Silent; add to that the possibility of a spy in the camp, blackmail, and accusations of corruption and the return of an old enemy, there is more than enough to keep the story moving from one crisis to another. Offspring is without doubt full of action, and to add to the drama there are plenty of unknowns to keep us guessing. As the story builds towards its climax the pace quickens and the tension builds; and the book is difficult to put down. As good as any of the books in the Silent Empire series, and with the same very likeable core group of characters, plus a few new names (but sadly still little of Segal), Offspring certainly keeps this series alive. While it makes for a most entertaining read, I have one complaint, and it is common to all the Silent Empire novels, it is the lack of subtlety in the way Steven Harper employs the dialogue to advance, recap or explain the narrative. It is of course a standard method, but often here it comes across as a little clumsy, even patronising; with the result that it lessens the tension and interrupts the flow to the action. Nonetheless if Harper decides to write yet another in this series I will without doubt be reading it.

Published by Thriftbooks.com User , 17 years ago
Most of the Silent can no longer enter the Dream, a telepathic place of existence that allows instantaneous communication between worlds spread all over the universe. On the planet Bellerophon, Kendri and his life mate Ben are regarded as heroes because they saved part of the Dream and can enter at will. Bellerophon is electing its first governor in centuries because without the Dream, the Confederation that saw to Bellerophon's safety no longer exists. Ben and Kendri's grandmother is a candidate, who advocates a strong military to prevent pirates from raiding the planet. During the campaign, Kendri actively supports his grandmother, but someone tries to kill him. While trying to figure out who in their inner circle wants him dead, someone kidnaps the Silent and the Silenced (those who cannot enter the Dream any longer). Although Kendri and Ben do not know it, there is a link between the murder attempts and the abductions; the dynamic duo must figure that out for failure means loved ones dying. Readers who have followed the previous adventures of Kendri and Ben will see they prepare for parenthood using surrogate mothers and frozen embryos, which are genetic siblings of Ben. Their relationship is beautiful to behold as they battle a maniac who wants every Silent dead and the Dream buried. They make the tale into fantastic science fiction who-done-it that fans will revel in because Steven Harper turns his audience into believers that the planet Bellerophon exists in a physical solid state. Harriet Klausner
Copyright © 2020 Thriftbooks.com Terms of Use | Privacy Policy | Do Not Sell My Personal Information | Accessibility Statement
ThriftBooks® and the ThriftBooks® logo are registered trademarks of Thrift Books Global, LLC