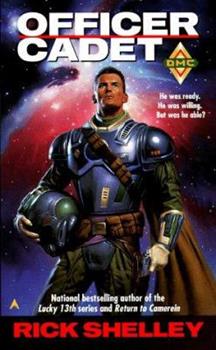 This description may be from another edition of this product. Bestselling author Rick Shelley brings readers an explosive new series of future warfare. Lon Nolan, a young soldier expelled from Earth's prestigious North American Military Academy on trumped-up...

Realistic Military Sci-Fi at its Best!

Published by Thriftbooks.com User , 18 years ago
This is the first book I've read by Rick Shelley and I was immediately struck by the realism that he creates in this tactical military novel. You really get a sense of what it would be like to be a new recruit going into live combat for the first time. Shelley does an excellent job of explaining tactics and combat situations. One thing I found intriguing was that as I was reading this, I forgot I was reading a sci-fi novel. The level at which the conflicts were examined, from the perspective of the ground troops, would apply to any war. The futuristic weapons and equipment are kept to a minimum. My only complaint was that the character of Lon Nolan didn't seem to exactly fit that of the first-timer going into battle. Lon reacts cooly and professionally with only a minimum of anxiety. Once the action starts he acts like a seasoned veteran. Maybe Shelley is just trying to show that Lon is a natural in the arts of warfare. Anyway this is a minor quibble and doesn't knock this down from a five star rating. Highly recommended if you're into grim and gritty military combat.

Published by Thriftbooks.com User , 18 years ago
Officer-Cadet (1998) is the first novel in the Dirigent Mercenary Corps series. Lon Nolan is willingly expelled from the North American Military Academy on trumped up charges, but pursues his military vocation among the DMC. In this novel, Lon becomes an Officer-Cadet in the Second Squad, Third Platoon, A Company, Second Battalion, Seventh Regiment of the DMC. He will be nothing but a glorified grunt until he has survived combat; after that, he will be either discharged or given a commission. In the meantime, he being rotated around the various staff positions when not training with the rest of his unit. After a few months, Second Battalion is sent on contract to Norbank to put down a rebellion and to train the colonial militia. The available intelligence is woefully inadequate and, after arrival, found to be very much out of date. The rebels have obtained military grade weapons and are resolute but relatively unskilled fighters. The colonial militia is greatly outnumbered, poorly armed, and besieged in the capital city, so they expect the DMC troopers to do most of the fighting. The DMC, however, concentrates on training the available colonial manpower to beef up the city perimeter and to support any offensive initiated by the DMC. The Third Platoon has made initial contact with the Norbanker HQ in the city and therefore is tasked with bringing out a company's worth of barely trained men to rendezvous with shuttles outside the city to obtain their arms and equipment. The rest of the battalion creates a diversion as they are brought out. At the LZ, the battalion provides a quick briefing on using the weapons and then moves further away from the city. There the battalion digs in for a while and provides the Norbankers with two hours of concentrated training on their weapons and simple tactics. The intent is to infiltrate the Norbankers back into the city that evening, but enroute the battalion gets into a firefight with the rebels forces. This novel is about ground combat in the colonial worlds of the 29th century. It is relatively low-tech compared to the military forces of Earth and the older colonies of that period and the DMC space forces function primarily as transportation and overhead intelligence. Recommended for Shelley fans and anyone who enjoys ground combat in a SF setting. -Arthur W. Jordin

Great start, for a great serie of books!

Published by Thriftbooks.com User , 21 years ago
I bought this book, just to see how the author was. But it turned out that It was a great buy, since then I have bought more of Rick's books. The author is great on introducing people seperate from oneother, but they almost always join up. Also nice to see that armor is not always what you want to use, in these books atleast. Nice overal development of the characters.

This book was another great one by Rick Shelley!

Published by Thriftbooks.com User , 22 years ago
I have read four of Rick Shelley's books, and I loved them all. I never liked Science-fiction before, but now I love it!

Interesting twist on the military and mercenaries.

Published by Thriftbooks.com User , 23 years ago
I liked this book and the second in the series "Lieutenant." As a military retiree I can see the place for military units other than those of a government. Further, I see that with a fair standard of ethical and moral conduct that troops employed as a free lance military can have a beneficial effect on the governments that employ them. Rick Shelley is a good author, I also recommend his trilogy of the 13th Spaceborne ("Until Relieved," "Side Show," and "Jump Pay").
Copyright © 2020 Thriftbooks.com Terms of Use | Privacy Policy | Do Not Sell My Personal Information | Accessibility Statement
ThriftBooks® and the ThriftBooks® logo are registered trademarks of Thrift Books Global, LLC