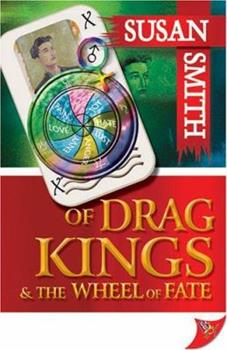 Of Drag Kings & the Wheel of Fate

'Of Drag Kings and the Wheel of Fate' is a novel about history, sex, drag, paganism, death and family. Using an ancient myth reset in the queer community in Buffalo, New York, it explores gender fluidity, sexual diversity, and the deeper questions of love and identity.

Published by Thriftbooks.com User , 16 years ago
I was pleasantly surprised when reading this book which is definitely something different in the market of lesbian fiction. The story and the skilled writing of the author captivates and leaves one with the urge to read it again, cause you are left with the feeling that if you read it a second and a third time you will see things you haven't noticed before. It's not just another love story or a story between two people with an age difference. There is so much more to it. I really appreciated this book and can't wait for the sequel, anxious to find out if the author was able to write with the same magical skill again.

Talk About That Voodoo You Do...

Published by Thriftbooks.com User , 16 years ago
I read the first edition of this book a few years ago and have recently enjoyed the newest edition. Smith has created colorful, interesting characters to tell this great Uber story. Instead of the typical successful professionals depicted in other novels in the genre, she delivers Taryn, a young Drag King who lives in a house full of witches, and Rosalind, a young professor who has not earned tenure. I loved the underlying romance. It was love at first sight for Taryn and Rosalind. This happened in spite of Rosalind's recent divorce and lack of previous attraction to women. However, I was a little confused about Rosalind's problems at school. She was called in to her department head's office for supposedly cavorting with a student (ie., Taryn - who isn't a student at all), but there is never any closure to this issue. In fact, Rosalind seemingly exacerbates the situation by enthusiastically bidding on, and winning, Taryn at a local charity auction. One shortcoming of the book is the characters don't have much depth. The reader is supposed to have a general knowledge of the lives of Xena and Gabrielle. I suppose this device is meant to give Taryn and Rosalind dimensionality. It certainly works if you're a fan of the show, but there is a gap if you're unfamiliar with characters. An enjoyable read, this book is recommended for a weekend evening home alone with a pot of coffee and a box of biscotti.

Published by Thriftbooks.com User , 16 years ago
Fiction has a way of opening up new worlds to us, exposing us to characters from all walks of life, and even changing our attitudes. Susan Smith's Of Drag Kings and the Wheel of Fate is one of those rare books that does all of the above and does it superbly. Of Drag Kings and the Wheel of Fate is a novel about family, not the family we are born into, but the family we choose as adults. It is a book about the courage to be who you are, about the choices we make, and the honesty to follow through on those choices. Smith has invented a story that is full of love with intense characters who along the way discover parts of themselves for the first time. Dr. Rosalind Olchawski, a professor at a university in Buffalo, New York, is newly divorced when she is taken to a drag club by her best friend Ellie. Taryn is a young, bold, sexy butch performing at the club, and when Ros and Taryn have a chance encounter after the show, the pull is overwhelming to both. Their tension is immediate, and we are captivated by the possibilities. Rhea and Joe, who are lovers, are Taryn's extended family. Rhea, fiercely strong and stubborn, is slow to accept Ros into their circle. She has her reasons, but are they valid or is she just being selfish? Joe, the family's protector, is the most accepting of Ros. He understands the family dynamics best because of his unique perspective as a transman. He acts as the cohesive bond that helps the characters' interactions evolve, moving from the past through the present to the future. Smith's writing style has a poetic rhythm that is enjoyable to read. She uses parallels throughout the book to advance the novel and help the reader identify with the dilemmas her characters are facing. At one point she compares Ros' relationship with Taryn to Ros' brother's marriage to a non Christian Indian woman. Both prefer partners with characteristics different from themselves. And both have had to overcome similar obstacles as well as prejudices with the choices they have made. Of Drag Kings and the Wheel of Fate is a novel that makes a difference. It is filled with understanding and respect for the varied forms that love takes. It discards standard definitions of family, love and gender. Smith's story reminds us that people cannot be put into neat little boxes. Life is fluid and changing, and as Smith so succinctly conveys to us, we must be too.

Published by Thriftbooks.com User , 19 years ago
Finally, a lesbian book with a somewhat new twist. The characters are well developed and you seem to feel what they feel.Good writing and a plot that keeps you interested. A few typos, but nothing so bad that it's distracting. I look forward to more from this author.

Published by Thriftbooks.com User , 20 years ago
I am a huge fan of hir writing, the final edited and published version of this text is outstanding! It is an intimate exploration two people discovering themselves through the venue of relationship. I heartily recommend it. Full of humor, romance, insights and magik, this book is certain not to disappoint!
Trustpilot
Copyright © 2022 Thriftbooks.com Terms of Use | Privacy Policy | Do Not Sell My Personal Information | Cookie Preferences | Accessibility Statement
ThriftBooks® and the ThriftBooks® logo are registered trademarks of Thrift Books Global, LLC