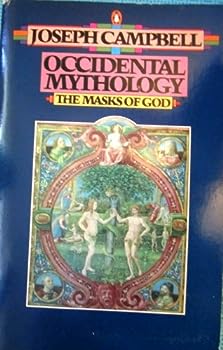 (Book #3 in the The Masks of God Series)

A systematic and fascinating comparison of the themes that underlie the art, worship, and literature of the Western world. This description may be from another edition of this product.

Published by Thriftbooks.com User , 15 years ago
One topic from PRIMITIVE MYTHOLOGY, the first volume of the MASKS OF GOD, that is especially prominent in the beginning of this volume concerns the mythology of the Earth Goddess reaching back to the Bronze Age. Primitive agriculture spread within the broad equatorial zone but first developed in the Middle East, and the myths that come out of that time represent an endless cycle of life and death, growth and decay, in which everything is renewed as in the obvious phases of the moon, in the endless reappearance of the sun. The force of this growth and renewal is necessarily female, of the goddess, and the items that appear in the artifacts dating from this time concern the serpent, the tree, the moon, and include signs of both human and animal sacrifice for the purpose of ensuring fertility. In contrast with the female element in primitive agriculture is the masculine emphasis of the tribesman and herdsman of the Iron Age. With weapons newly acquired, pastoral warriors sought to extend their power. The ascent of the Mesopotamian god Marduk, in his victory over the goddess-mother Tiamat, parallels the rise of the invader Hammurabi. The patriarchal society that now evolves includes such people as the Hebrews, wanderers of the desert. As much as the Hebrews have been a center of attention, life did not originate with them and the Old Testament. First came a long history leading up to their arrival, in which civilization began in the Middle East, including a goddess centered mythology and, notably, the foundation of the written word. Scholarship reveals that there were multiple texts that first existed from which the Old Testament was constructed, and two mythologies can clearly be discerned that were blended together to form the creation myth in Genesis. The ancient symbols of the serpent and the tree appear, but here, instead of a divinity that encompasses the force that is in all nature, the divinity is seen as being totally separate and apart, transcendent and at the same time omniscient; and by man's deeds and woman's temptation, human kind is rendered into an alienated, sinful state, in which everything is either a blessing or a curse from God. Contrary to the Old Testament, the goddess and nature were not reduced to insignificance by the Greeks and Romans. The forces of nature are clearly apparent in Greek myths, and the goddesses, though overshadowed by Zeus and the heroic male, played prominent roles. Rather than having the effect of denigrating nature as being corrupt, the Greek myths encouraged those with an inquiring mind to seek knowledge about the world and ask fundamental questions about life. As a result, at the time of the Greeks, there was a flowering of philosophic inquiry and great strides made in mathematics and science, some of which would not be resumed for almost another two millennium. With the advent of Christianity, the theology of immanence, as evident in the Roman pantheon or Gnosticism or the mystery cults, falls by

Published by Thriftbooks.com User , 18 years ago
When Joseph Campbell died, we lost a treasure. Campbell spent years building his vast knowledge of myths and thankfully, committed much of his distilled knowledge to writing. OCCIDENTAL MYTHOLOGY is one of three major works the author compiled about the history of the myth and is part of the THE MASKS OF GOD series. In OM Campbell reinforces the compelling case he made to Bill Moyers and through his writing, that we need to look beyond the masks if we would truly know `the thing that stands behind'. In the`Masks of the Gods'series, Campbell synthesizes much of the archeological, linguistic, and theological material discovered and analyzed in the 20th Century, to elaborate and modify many themes found in Sir James Frazier's GOLDEN BOUGH written almost a century earlier. Campbell organizes his series historically across space, showing how the beliefs of one age and place influenced those of another. In OM he discusses in great depth and with scholarly wisdom how the religions of the Levant were shaped by internal and external forces, and how in turn religious movements that originated in the Middle East interacted with the beliefs of the various peoples of Europe. Religious beliefs apparently do not travel one-way. Among other aspects of religious transmission, Campbell discusses the process of `mythological defamation' the priests of newer religions employ to attempt to demonize the old religions. Using art forms such as statuary and painting, Campbell also demonstrates how themes and ideas from older religions survive in the guise of the newer religion as elements of the older religion become incorporated into the newer religion (if you can't demonize it, incorporate it). Some of the more interesting transformations in the West involve the snake, the Goddess, and the risen Lord, which have an ancient history.After revealing how the attributes of one religion after another became incorporated in a succeeding religion (Christianity and Islam are covered), Campbell summarizes his thesis. It seems a core theological issues is this: If a Higher Power exists, is it (he/she) transcendent or immanent? The transcendent God is "out there" while the immanent God is "down here". In other words is God, part of his or her creation? Thousands of people have died fighting over this and other difficult questions.

Published by Thriftbooks.com User , 18 years ago
Occidental mythology developed into the three major monotheistic religions that dominate the West - Islam, Christianity and in particular, Judaism. The role of the divine in the Western psyche has evolved from the Primitive, flirted with the multi-dimensional gods and goddesses of the East before settling down to a one God belief. (Although one would have question how the idea of a Trinity fits in with that belief.)The notions of sacrifice and redemption are heard throughout the saga, with many religions, lost sects and heresies sharing a similiar prophecy - that a Messiah would come who would lead them to victory. But before this was another belief-the eternal battle between good and evil. Perhaps the hardest idea for Monotheists is the notion of singular God and the presence of evil. This required the invention of yet another divinity - one that is evil.Campbell traces the origins of Christianity, its strains and morphing theology. Along the was and from an Arian strain of Christianity (which virtually rejected the oneness of a Trinity) arose Islam, a warrior religion that originally worshipped a desert rock. The Kaaba, this rock, is still an object of adoration for Muslims and is circled by pilgrims annually. The ideas of sacrifice and atonement by at first an animal, then a person, had ancient origins - the sacrifice of the one for the many - well before Christian times.Campbell continually tries to show the parallels between our modern religions and the now-forgotten rituals and beliefs that became universally imbedded in the Occidental mind.

The Passion of the Western Soul

Published by Thriftbooks.com User , 23 years ago
I cannot overrate the depth & breadth of Campbell's insights.This book is at once visionary and scholarly, passionate and detached:in sum, it reveals the powerful (under)currents that helped to shape our minds and hearts into what we are. From Persia and Israel, from Greece and Rome, through the crucible of Norse and Irish mythologies of the Middle Ages-this book ends with Zarathustra's words "By my love and my hope I beseech you-do not forsake hero in your soul!"
Trustpilot
Copyright © 2022 Thriftbooks.com Terms of Use | Privacy Policy | Do Not Sell My Personal Information | Accessibility Statement
ThriftBooks® and the ThriftBooks® logo are registered trademarks of Thrift Books Global, LLC