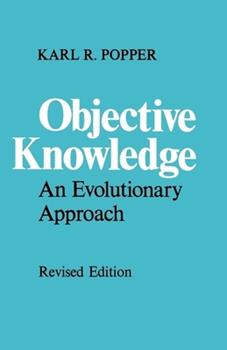 This description may be from another edition of this product. The essays in this volume represent an approach to human knowledge that has had a profound influence on many recent thinkers. Popper breaks with a traditional commonsense theory of knowledge that can...

The promised land of world 3

Published by Thriftbooks.com User , 12 years ago
Popper displays here his so called "third philosophy", that goes around the world 1, world 2 and world 3. This is not a very popular topic in Popper scholarship, in part because it is his late philosophy and it is not constructed under a systematic manner as the other two were (The Logic of Scientific Discovery and The Open Society). Still, much than a mature and finished philosophy is a programmatic start up. You will find isolated papers, conferences that Popper offered in his last years, more or less happily ensembled by the editor. But there is much more in the rear that it would seem at a first glance. The impact on deep consideration of the influences between the different worlds and, especially, between the world 3 and the other two, is something that still has not been done. Only 9 years ago, for instance, the Peruvian guru De Soto published an interesting book, The Mistery of the Capital, where he stresses that poverty is mainly caused not because poors in the world do not have assets; but instead because these assets are not "visible" to the international markets because they do not have appropriate titles of property universally accepted. In popperian terminology: because their assets only exist in the world 1 and world 2, but not in world 3. World 3 is still a promised land to be discovered. Poppers work is an adequate beginning if you want to change the situation.

Paradigm Shift in Major Key -- Not for Beginners

Published by Thriftbooks.com User , 14 years ago
This collection of short essays by a Jew in refuge from Hitler's Nazism is among the most influential works this Gentile has ever read. I wonder why it is not equally valued by the Zionists? Popper's principal theories are summarized in this excellent compendium, save his political and pseudo-scientific discourses. Popper is eminently accessible, one of the most lucid and articulate philosophers since Aristotle, superseding even Hume and Russell. But for all his accessibility, he is still a major challenge, not because he's difficult to read, but because he's turned Marx, Freud, historicism, psychologism, sociology, etc., and the pseudo-sciences on their heads. Yet, for his radical insights, he still remains controversial -- largely because he accepts "Hume's Problem of Induction" for what it truly is: A major problem for those disciplines dependent on it. Not unlike Darwin, whom Popper fully embraces and models many of his insights, seeing the world through Popper's lens is both liberating -- and difficult for many individuals who are steeped in essentialism and mythology. Popper is unopposed to those individuals, he simply operates on a much more rigorous plane of intelligibility. This work would NOT be the work to start Popper with, although it is clear and concise in every respect. I recommend David Miller's "Popper Selections" for several reasons. First, the "chunks" in Miller's edition are much smaller and easier to digest than these compendious writings. Second, Miller's edition is broader is scope and function and gives the reader a broader sense of how revolutionary and yet radical Popper is. Third, Miller's work introduces these same subjects in smaller portions so that the dazzling mind of Popper is fully on display. Once that task is accomplished, this book refines, elaborates, and develops more concretely the epistemological concerns which are the bedrock of all Popper's works, and why he represents such critical risks to the metaphysicians practicing their voodoo.

A Splendid intro to common-sense epistemology!

Published by Thriftbooks.com User , 19 years ago
To those who've not read Popper before, I highly reccomend that you statrt now- and with this book. To those who have experienced these pages first-hand, you understand why Popper and the theories herein are so important. As short-windedly as possible, I'd like to say how I came to read him. I had forayed into philosophy through Ayn Rand who managed to convince me- as she does so many readerss- that philosophy is a chasm between soft relativism and hard objectivism. Either one believes in absolute truth and reasons 100% ability to grasp it, she wrote, or that truth is a chimera and as such, reality is mutable. I believed her. Later though, I grew restless. Truth is out there, I supposed, but how can we guarantee that our beliefs are and will always be correct? Grudgingly, I read Popper and it all made sense. Most are familiar with Poppers theories on demarcation and epistemology but this book goes into great detail on both in clear, enjoyable language. Truth, Popper tells us, is absolute. It is certainty that creates the dilemma. Since experience has shown us that objective reality exists, science works but does not take us the full way. Theories are superceded and what once seemed true may not tomorrow. So the ultimmate test of a theory should not be whether it can be VERIFIED- if we look for supporting evidence of a pretty good yet minorly false theory, we'll probably find it- but whehter the theory can be FALSIFIED- if we look for evidence against a pretty good yet minorly false theory, it's easier, quicker and beter to find IT. What does this mean? Reality exists, otherwise why do science- it's just our CERTAINTY of any belief that will prove elusive. This book, in its small yet powerful essays, explains, examines and defends this theory of an evolutionary approach to knowledge (i.e., science.) Popper is not Foucoult; his intention is not to destroy science but to enhance it. If you're like me, in awe of Popper's theories, perplexed as to why more people aren't and would like to read others who give similar views, one can do no better than C.S. Pierce and John Dewey. Especially Dewey's "Quest for Certainty" which underlines the experimental process of knowledge and breaks down the false dualism of knowledge and action. Also, Michael Polanyi and Thomas Kuhn (don't believe what Kuhn's critics, even Popper himself, says about him) have similar approaches. for a contemporaary Popperian style, read Susan Haack's "Manifesto of a Passionate Moderate." Not to dissuade you from reading this first as this is the starting points, the other books are enhancements. Fall in love with science!

Published by Thriftbooks.com User , 19 years ago
When an undergraduate in college, I was mainly exposed to so called "Continental" philosophy which seems to have a tendency, to say the least, toward bosh, and to analytic philosophy which seems to have a tendency, to say the least, toward triviality, plus, since it was a Catholic college, selections from Plato, Aristotle, and medieval metaphysicians. I could not really acclimate myself with these doctrines. It is in a sense unfortunate that I found an alternative outside my formal schooling. With Popper I found someone who is readable--I think that any intelligent general reader can understand him--original, and with an outlook congruent with natural science. He is known for his ideas on scientific method--that science does not really "prove" theories, but creates conjectures which have rich empirical content and withstand falsification. With ideas like this, decades ago, he attacked doctrines like Marxism, and psycho-analysis. Demolishing the claims of these doctrines may seem to be no big deal today, but decades ago they were major tools of our intellecutal elites. This book covers old ground such as his views on science but also, it seems to me, breaks new ground. A new contribution is his theory of the Three Worlds, which I think is fruitful. He also deals with the question of free will, which I sense is the weakest part of his book. Popper distinguishes three realms or 'worlds.' World1 is the world of physical objects; World2 is the world of our subjective beliefs, thoughts, feelings; World3 is what he calls an objective world of knowledge, the objective contents of thought--the knowledge contained in books, musuems, libraries, etc. Popper holds that most philosophers considered the object of epistemology--the theory of knowledge--to be World2. Popper argues that this is misguided. He thinks it is, to use his words, "irrelevant." The proper object for epistemology is World3. We should concern ourselves not with justifying our subjective beliefs but with objective theories--their contents, the arguments supporting them, etc. A theory of knowledge based on World3 has some interesting ramifications. It is immune from modern relativistic attacks (this is my personal view). World2 epistemology has premises, both implicit and explicit, that make it vulnerable to relativistic attacks. World3 epistemology, instead, proceeds with the GROWTH of knowledge. Another interesting feature of World3 is that, even though it is man-made, it is autonomous. If humanity were to disappear, World3 will still be "outthere". World3 is created by individuals with certain goals, but the contents of World3 seem to have a life of its own(and this is very metaphorical). It can be used by others in different ways, it leads to new problems and solutions not considered before, etc.Popper also deals with the problem of understanding in the humanities. There are some who hold that there is a difference between understanding in th

A work of genius

Published by Thriftbooks.com User , 21 years ago
This book is probably the best ever written on epistemology. Here Popper presents his theory of three worlds, one of which is the world of intelligibles, of ideas in the objective sense, which are Popper's candidates for knowledge without a knowing subject, or what he calls knowledge in the objective sense. Thus the term 'objective' in the title is intended by Popper to emphasize an analogy with physical objects; it is not intended in the more common sense of meaning 'unbiased' or 'unprejudiced' or anything like that (nor does Popper's philosophy have anything in common with Ayn Rand's so-called objectivist epistemology). The book is subtitled 'An Evolutionary Approach'. Popper sees the evolution of knowledge as continuous with biological evolution: "From the amoeba to Einstein, the growth of knowledge is always the same: we try to solve our problems, and to obtain, by a process of elimination, something approaching adequacy in our tentative solution." In Popper's view, the evolution of knowledge is not merely analogous with biological evolution; rather, it is an extension of biological evolution: it is basically the same, continuous process, from the biological evolution of the amoeba to the most sophisticated theories of science.The first chapter in the book contains Popper's most extensive discussion of the problem of induction. Popper's interest in this problem dates back to the earliest days of his career. His conclusion is, I think, totally convincing: there is no process of induction, and the sorts of things imagined by so many academic philosophers are just fantasies and misconceptions. Science gets along perfectly well without any inductive logic, as Popper explains.The final chapters represent some of Popper's most mature philosophy. He offers a realist view of logic, physics, and history. He discuses in perfectly lucid terms the aim of science and the problem of rationality. The appendix, entitled "The Bucket and the Searchlight: Two Theories of Knowledge", is a brilliant climax in which many threads of the otherwise independent chapters are brought together. If you want to understand Popper's epistemology, this is the book to read. It is the testament of a great mind and a great man, a philosopher who, in my view, will be seen in coming decades and centuries as perhaps the greatest of the 20th century.
Copyright © 2020 Thriftbooks.com Terms of Use | Privacy Policy | Do Not Sell My Personal Information | Accessibility Statement
ThriftBooks® and the ThriftBooks® logo are registered trademarks of Thrift Books Global, LLC