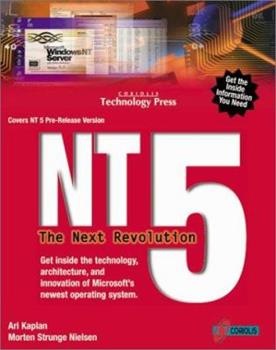 Nt 5: The Next Revolution

While books about unreleased products are sometimes a risky investment at best, NT 5: The Next Revolution by Ari Kaplan and Morten Strunge Nielsen offers some important high- and low-level discussions... This description may be from another edition of this product.

Published by Thriftbooks.com User , 23 years ago
Although based on beta 1 code, the book takes the right approach of providing breadth rather than depth coverage. This provides an excellent rounded view of Windows 2000 and doesn't really suffer from the fact that now it is nearly a year old. If you were going to nit-pick, then yes some of the detail is now no longer correct....but this really is totally outweighed by the books "complete" approach to the subject.

An Outstanding Introduction to Windows 2000 (NT 5)

Published by Thriftbooks.com User , 23 years ago
This book is a well-written and accurate overview of Windows 2000 and its significance. Many people will find that it tells them all they will ever need to know about the features of Windows 2000. For the more technically inclined it is a superb overview and introduction to Windows 2000. It was written before the second beta release became available, so it is based entirely on beta 1. This in no way diminishes its effectiveness or value, but does mean that certain later developments are not included, including the name change from Windows NT 5.0 to Windows 2000 and details of the different varieties of Windows 2000 (Professional, Server, Advanced Server, etc). I highly recommend this book to anyone seeking an understanding of Windows 2000 from either a business or a technical perspective.

So perishable a title...

Published by Thriftbooks.com User , 23 years ago
What's funny is as the mass proliferation of "NT 5" books knee-jerk their way to market, Microsoft revamps the whole nomenclature of the operating system. Everything is NT from hereon (no more successors to the 3.x, 95, 98 line) but the root term is "Windows 2000." So far the lineup looks like this: "NT 5" Workstation is now Windows 2000 Professional. Three other editions include Windows 2000 Server, Windows 2000 Advanced Server (same as Enterprise), and Windows 2000 DataCenter Server (best guess: a large-scale enterprise package). Oh well, what's important is the contents. Anyone heard word of certification beta exams?

For those who want a glimpse into the future. A must have!

Published by Thriftbooks.com User , 23 years ago
Check out chapter 15 on ADSI, if you have trouble deciding which chapter is the most intriguing. Well written. Concise. There's no CD, but who cares! This book really gives you a look into the NT crystal ball - the future as it relates to past versions of NT. Extensive coverage of new technologies coming down the pipe from Microsoft and the industry as a whole, and how NT will facilitate it and support it. If your company is already on NT, feeling the NT gravitational pull or you make a living supporting NT - you'll want to get your hand on this one. My humble opinion...

A must read for people wanting to find out about NT

Published by Thriftbooks.com User , 23 years ago
This is the best book that I've seen so far covering NT 5.0. A must for anyone seeking information on this important new operating system.
Trustpilot
Copyright © 2022 Thriftbooks.com Terms of Use | Privacy Policy | Do Not Sell or Share My Personal Information | Accessibility Statement
ThriftBooks® and the ThriftBooks® logo are registered trademarks of Thrift Books Global, LLC