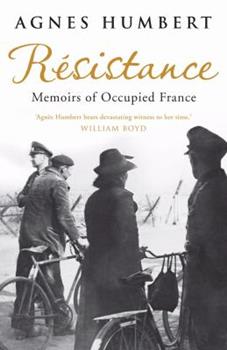 "You may think you've read stories like this before, yet hers is special... Resistance was written by a woman of exceptional intelligence and courage. Her perceptions are...acute, honest and... This description may be from another edition of this product.

Published by Thriftbooks.com User , 12 years ago
I highly recommend this book to anyone interested in WWII history on the resistance. Wonderful writing makes it hard to put down.

Published by Thriftbooks.com User , 12 years ago
Agnes Humbert was an art historian turned member of the Resistance after Paris fell to the Germans in June, 1940. She, her family and much of the population of Paris fled the city as the Germans approached. Scenes of horror unfolded as she walked with masses of people from Paris to south of Limoges. Her account of her journey is immediate and heartrending. Humbert was languishing in the countryside and sinking into despair when she heard a broadcast by General de Gaulle exhorting the French soldiers and people to rally round him and carry on the struggle. She wrote of her reaction: "A feeling I thought had died forever stirs within me: hope." Humbert was further buoyed by radio broadcasts recounting that the people of Paris were tearing down German posters as quickly as they were posted. The people of Paris were rebelling! She waded through the bureaucracy to obtain the papers that allowed her to return to Paris in August, 1940. Thus began her journal and memoir of her life as a member of the French Resistance and political prisoner subjected to forced labour in German prisons. The book is two parts journal and one part memoir. Until two days before her arrest on April 15, 1941, Humbert maintained a journal. After she was liberated from the German prison in April, 1945, her journal commenced again. The story she told of the time in between was from memory. It was vivid. Journal and memoir--throughout, the reader feels the author's sense of humor, sense of the absurd, and courage. One gains an acute understanding of the strength of conviction of Humbert and of her fellows, and further, of the risks they undertook both before and after their arrests. The reader will cringe at the descriptions of the abuse and deprivation Humbert suffered while in prison, and cheer her efforts to sabotage the enemy's war efforts in the small ways that were available to her. I will not soon forget this book; it is incredible to me that it was published in 1946 but not published in translation until 2008. I have only one other comment and that is about the translation. I believe the spirit of the book and the language of the book were accurately translated, so I am being a bit picky to say that the voice of the author does not come through as a French voice. The French have a certain way of expressing themselves that is different from the way we English speakers do. I would like to read it in French to see if it is just that much better.

Published by Thriftbooks.com User , 13 years ago
I found the 3 previous reviews to be very good. But I disagree with the first 2 reviews in their claims that the first half of Humbert's book is "dry and expository","methodical","a little too matter of fact", etc. On the contrary, I found the first half of Humbert's book to be electrifying reading. There is an intense sense of urgency. We have to remember the book is a journal describing events as they happened almost form day to day. Indeed, the second half of the book was written immediately after her liberation as a slave laborer in 1945. But the entire book is uniform in its intensity and its profound, compassionate and shrewd reporting of unfolding events. I consider this to be one of the most amazing accounts of WWII and the French Resistance that I've ever read. My heart and admiration go out to Agnes Humbert. An extraordinary woman! And to all those who shared her struggle.

Published by Thriftbooks.com User , 13 years ago
I remember reading this book years ago in the original French when I was a student, and I find it amazing that such an important primary source on the French Resistance and German occupation of France has taken sixty years to be translated. Agnes Humbert's sheer tenacity in banding together with her comrades to publish and distribute the illegal anti-German newspaper Résistance is a riveting profile in courage, yet Humbert never really draws any attention to her heroism, presenting her actions merely as what was required of a moral, patriotic person in a conflict where there were only two sides: for the Nazis or against them. I agree with the previous reviewer that the second half of the book detailing Humbert's arrest and imprisonment is more interesting, better written, and overall more compelling than the early sections, which are indeed dry and expository. Which brings me to my only real objection to this very useful addition to the English-language literature on the civilian experience of the war: the publishers should have gone to greater lengths to commission a truly spirited and detailed introductory essay orienting the lay reader (or, more importantly, college students) to the timeline and chain of events in the Nazi takeover of France, the division into Vichy and German-administered provinces, etc. I think there is a great deal of room for confusion here for people unfamiliar or only vaguely familiar with the historical background. Nonetheless, it's wonderful to know that this book is now available in English (and in a very nice, fluid translation)--a great addition to the reading list for any college course on WWII.

Published by Thriftbooks.com User , 13 years ago
Résistance is the harrowing journal and memoir of Agnès Humbert, a middle-aged art historian in Paris, and her experiences in Nazi occupied France during WWII. When Humbert first hears the rumors of an occupation, she is distraught and numb, but soon finds a strong will of opposition inside her. She begins to contact others who are like-minded and is soon embroiled in producing Résistance, a newspaper filled with propaganda, which she and her colleagues distribute anywhere and everywhere they can. Agnès meets several important contacts and knows that danger is only a heartbeat away, for if the Germans find out about her anti-Nazi sentiments and activities, she will be imprisoned. Though she knows the dangers, she continues with her work, only to be brought in for questioning regarding her activities. Following her eventual trial, Agnès is convicted and sent to prison. What ensues is the heart-breaking story of what she was subjected to after being becoming a political prisoner in France, and later Germany. The first section of this book was given over to the specifics and details of who and what her group of friends did in opposition to the German invasion. Many were implicated, yet as her journal was never found, Agnès was not the cause of any imprisonments or executions. Unfortunately, many of the people responsible for Résistance were tried and convicted anyway. I found this section to be a little dry and methodical. It almost seemed that this part of the book acted as a type of ledger of information, rather than a chronicle. Many of the people were only briefly mentioned, and I had some trouble in understanding who was who and what part they played in the opposition. While I believe that it was important to know the events that led up to her imprisonment, this section seemed a little too matter-of-fact. The majority of this book was devoted to the time that Agnès spent as a prisoner and laborer. During this time she suffered many abuses at the hands of the Germans. The tortures that she and her fellow prisoners faced in the prison were terrible, from starvation and beatings to severe confinement. Despite their atrocious treatment, the women were able to form friendships and take joy in the company of others, sharing news and small victories with each other. Many would not recant their political ideology even after being subjected to daily bouts of cruel treatment. I found it hard to believe that things could get any worse for them, but when they were moved to a German work camp, what had come before paled by comparison. In the labor camps, it was obvious that life was expendable and cheap. The overseers' attitudes went beyond the malicious and into the area of savagery. They were worked like dogs, with no care given to injuries or illness, and the living conditions and rations were pitiful. While Agnès and her fellow laborers struggled, inhaling caustic chemicals that gave them temporary blindness and suppurating ulcers, they still found wa
Copyright © 2022 Thriftbooks.com Terms of Use | Privacy Policy | Do Not Sell My Personal Information | Accessibility Statement
ThriftBooks® and the ThriftBooks® logo are registered trademarks of Thrift Books Global, LLC