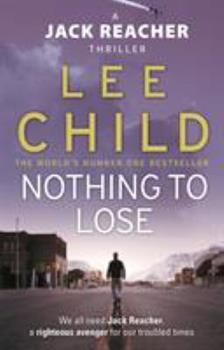 #1 NEW YORK TIMES BESTSELLER - THE BLOCKBUSTER JACK REACHER SERIES THAT INSPIRED TWO MAJOR MOTION PICTURES AND THE UPCOMING STREAMING SERIES REACHER"Explosive and nearly impossible to put... This description may be from another edition of this product.

It's all good - even for sociopaths...

Published by Thriftbooks.com User , 12 years ago
OK, so Lee Child isn't exactly Tolstoy or Dickens, and his hero is a misanthropic thug, but who hasn't daydreamed about being a non-person, wandering about using wits, wiles, and fists to right injustices and settle scores? And that's Jack Reacher who does not try to subvert or trick the system with false IDs and such. He takes the bus, pays cash, buys new clothing when the old stuff wears out. No family, no friends, no entanglements, no regrets - a strong, self-reliant character who floats on the surface, diving deeper only when he feels an injustice has been done. The premise is strained, no doubt, but the writing is just good enough to make it readable. I find it a guilty pleasure and enjoy watching Reacher get himself into and out of difficult circumstances, trying to make things right. So, yep, most of the one- and two-star reviewers are correct, but then they probably think James Bond is not entertaining. If you don't much care for Bond, Reacher won't please you much either, for Reacher is the crude American cousin to Bond. Who says sociopaths aren't entertaining? If Reacher bugs you, try Thomas Perry's Jane Whitefield series - you'll probably like her since her sociopathic behavior is rooted in her heritage so it's OK. The irony light is on here, folks, so no outrage at my aparent insensitivity.

Published by Thriftbooks.com User , 13 years ago
The sheer number of reviews means that my 5 stars probably will not affect the average rating much, but I still want to give this thriller a big thumbs-up. Critics are mentioning the political opinions that Child works into the plot, so if you disagree with those author opinions -- well, OK. As for its view of religion, there is an evil preacher, but his cult is so clearly depicted as a real nutjob cult that I find it kind of baffling if real Christians are taking offense at it. In fact, another character shows up who's a really cool minister. It wouldn't surprise me if Child did this specifically to show that his villain does NOT represent the ministry as a whole. How the taggers and reviewers who call the book "anti-Christian" missed that, I don't know, but I did not find it anti-Christian at all, and I am one. But as a thriller, it's one of his best, and I say that after being a bit disappointed with some plot silliness in his previous book (Bad Luck and Trouble, which was fun but deserves lower ratings than this one, as a story). Here, Child takes a hard-to-make-suspenseful scenario and makes it a true nail-biter. There's plenty of action, but the plot does require Reacher to do a lot of information-gathering, and long journeys by foot. It's hard to keep the suspense high even through these passages, but Child does it. You can feel the tension, the disorienting blackness of a night crossing from one town to the other on foot, the teeth-grinding frustration Reacher feels, but must accept and cope with, when the suspect strands him out of town. The bits of the plot come together nicely, and the answer (for this reader) wasn't obvious early or uncovered too quickly. Interesting, believable local characters, with complex personal lives, are there too. Unless you really can't stomach cynicism about the Iraq war, you'll be greatly entertained. If the politics will mar the experience that much for you, skip it, but it's a good GOOD entry in the series.

I Smell a Rat

Published by Thriftbooks.com User , 13 years ago
Way more reviews here than make sense deriding this book. After hesitating to read this (who wants to be disappointed by their hero?) I dug in and downloaded it onto the Kindle. While it isn't Lee Child's best, it certainly doesn't rate the dismal reviews of those who appear more to have a problem with political opinion and religious diversity than anything else.

Published by Thriftbooks.com User , 13 years ago
This is a fine Reacher novel, somewhere among the seven best out of his present thirteen. It's deliberately slow-paced, and that's clear from the first two chapters. Reacher's opinions on the Iraq war occur on at most three pages and occupy at most ten sentences. They are to the general effect that some ground troops are cynical about the war's righteousness. This notion has some relevance to a subplot, but is infinitely far from making the novel political, and it is not at all inconsistent with the Reacher who quit his own military career in part because of a similar cynicism, mixed, as military cynicism often is, with real idealism about his career in general. The villain is a bit like a James Bond villain, but his way of deflecting suspicion by letting Reacher examine his entire operation is interesting and well done. The Reacher stories never aimed at plausibility in the first place, and readers must be incredibly thirsty for action who say they could barely get through a novel in which Reacher fights bullies at six-to-one odds, three times climbs an unclimbable wall, and explodes an amazing amount of acreage. This is a very slightly more intellectual Reacher novel than most, maybe five percent calmer, brilliantly done and with new elements of mystery and contemplation. Some readers have dropped their rating from five stars to one! So I've raised mine from four to five. Don't be afraid to take this book on a plane; it will do the job just as well as any of the others.

Published by Thriftbooks.com User , 14 years ago
I have never read Lee Child before but I accidently did not respond to a book clubs monthly choice in time so I got this book in the mail and I have to say I was pleasantly suprised. I have a tendency to stay with the same authors and don't branch out too often but I will have to branch out more, Child's main character is a cross between Steven Segal before he got old and out of shape and Brad Pitt he is macho yet kind and has a great sense of duty and humor, plus he can really kick some butt. The fight scences are descriptive but not overtly gross and you can immagine the small town aptly named "Despair" especially if you have ever driven across country...need I say more, its hard to review this without giving away the plot except to say it has a lot of action and a lot of twists and even though you think you might know how it is going to end it is still somewhat surprising, and there is just enough semi romance to make it a good read for both women and men. I highly recommend this author and I will be reading more of his books to follow his charachter who has a wandering soul and a gypsy life.
Trustpilot
Copyright © 2022 Thriftbooks.com Terms of Use | Privacy Policy | Do Not Sell or Share My Personal Information | Accessibility Statement
ThriftBooks® and the ThriftBooks® logo are registered trademarks of Thrift Books Global, LLC