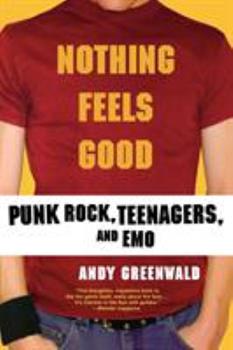 Nothing Feels Good: Punk Rock, Teenagers, and Emo tells the story of a cultural moment that's happening right now-the nexus point where teen culture, music, and the web converge to create something new. While shallow celebrities dominate the headlines, pundits bemoan the death of the music industry, and the government decries teenagers for their morals (or lack thereof) earnest, heartfelt bands like Dashboard Confessional, Jimmy Eat World, and Thursday...

Published by Thriftbooks.com User , 16 years ago
NOTHING FEELS GOOD in my opinion is one of the few books that really does explain who are the 'emo kids.' Andy Greenwald explains to the readers that the 'emo kids' are the regular teenagers with regular problems dealing with regular life. Greenwald's 'How to have a nervous breakdown' is one the most humerous things that I, myself, have read in a long time. The main subject that I think Greenwald covers well is teenagers and the internet. Being a teen myself, he really puts it into perspective about who teenagers are internet savvy, not only that, that they use the internet as a outlet for expression. Live jornal, myspace, xanga, makeout club, and anything that envolves an audience is a typical site a teen with use to express there emotions. Greenwald breaks down teenagers emotions and gives an in-depth idea about the term, 'emo'. Overall, I would highly recommend this book to anyone that wants to know what goes on in a teen's mind when the internet and music is involved. Greenwald takes a highly confusing topic of 'emo' and gives it his own meaning which is the reason why I bought the book and why you should read it.

Maybe nothing feels good--but this book sure does

Published by Thriftbooks.com User , 17 years ago
Andy Greenwald explores today's "emo kids", their bands, and how the relationship between them has evolved into a dialogue seen (and heard) powerfully at concerts where the kids are singing with the same fervor as the performers. Greenwald traces emo from its 80's roots in the DC area to today (or at least 2002). He focuses on many bands, from Weezer to Sunny Day Real Estate to Taking Back Sunday, and devotes a bit more attention to Jimmy Eat World, but his real focus is on Chris Carrabba of Dashboard Confessional, who has transformed his real life pain into music that his teenage listeners sing, and empathize, and relate to their own confusing lives. The real stars of the book, though, are the kids and the communities they form. While once upon a time, a high school loner would have locked himself in his room and listened to music with no contact with anyone else, now, as Greenwald notes, with a computer, he is never alone. Perhaps the most powerful language comes at the end of Part I: "Someone is singing about problems just like yours . . . You switch on your computer. You're safe in your room. You control everything. You're alone. But you check your buddy list and know, you are anything but alone." Greenwald fittingly devotes a chapter each to the teenage Internet phenomena of Makeoutclub.com and LiveJournal.com, each communities where teens interact, writing entries to be read by "strangers" that they could never have spoken aloud to their "in real life" peers at their schools, and the online community members comment or reply, making the teens' ordinary lives seem special. The teens sing the song of their lives online as passionately, if less tunefully, as their musical heroes do on CDs. And like the performers, each has an audience singing it right back at them.

Published by Thriftbooks.com User , 17 years ago
I found Nothing Feels Good on a rainy day last June, wandering around a Barnes and Noble in suburban Maryland looking for a friend's birthday present. My friend likes swing music, so I bought it for myself instead, deciding I needed to "try something new" - even though at the time I despised emo, equating it with depressed teenagers whining about their pissant little problems. I'm not too familiar with Andy Greenwald, but he must be a good writer if he could convince me to give emo - and Dashboard Confessional, which until then I absolutely hated - a second chance. By the end of that summer, my friends declared that "the emo book" had sucked me in, and maybe it did. For me, Nothing Feels Good, which includes a number of interviews Greenwald has with self-styled teenage "emo kids" helped me to feel a little more comfortable with myself and introduced me to a lot of music I otherwise wouldn't have learned about. (I even sang "Hands Down" by Dashboard for a show at my school after reading the book.) Greenwald not only looks at emo, but also at the psychology behind it - the male chauvinism and competitiveness that you might not notice the first time you see a skinny white kid behind a mic singing about his ex-girlfriend - and how the mainstream has taken on the effects of emo and how emo has taken on the mainstream. If you're just being introduced to emo - until reading the book, all I knew of emo was from the pseudo-punks that ran around the hallways of my high school - you might think Greenwald's assertion that "emo cannot be defined" is a cop-out, and that the three chapters he devotes to Chris Carrabba, lead singer of Dashboard Confessional, may be a little tedious. However, if you're at a party and a friend asks "so, what is this 'emo' I keep hearing about?" you'll get to be the center of attention for a few minutes as you explain its beginnings in the dying punk scene of Washington, DC in the mid 1980's. I believe this book will not disappoint. Culturally, it may not be relevant in a few decades - but, of course, there will always be a place for anyone curious to take apart the soul of the tortured American teenager.

Online reviewers should READ this book before commenting

Published by Thriftbooks.com User , 18 years ago
As a READER, I am extremely disappointed by those who saw fit to review Andy Greenwald's book, Nothing Feels Good, before actually reading it. Particularly by those who fancy themselves independent/alternative thinkers averse to corporate "labels" and categories ("Jane Doe" and "fred") and suburban mall culture ("a pretentious indie kid"). Judging a book by its cover (or title in this case) is precisely the mindless oversimplification that Greenwald's book targets. This book is certainly not a "how-to" transform yourself into an "emo" rockstar/know-it all. Rather it is an insightful, extremely well-written account of a much-misunderstood cultural phenomenon, which appreciates, rather than denigrates, those who form a part of this music/cultural scene.This book is also not a two-hundred-plus paged discography. Greenwald deftly weaves together history, cultural commentary and criticism, and tons of first-hand interviews, while giving voice to "emo"'s biggest fans and its most ardent detractors. Most importantly, Greenwald spotlights the ordinary kids, like you and me, who make this music possible and relevant.Personally, my favorite moments in the book are those that focus on the ways in which music, in general, and "emo" music, in particular, has enabled so many of us to sort through difficult times in our lives. Greenwald is clearly more blown away by the kids with whom he communicates than the rock stars. That kind of sensitivity and respect is so often neglected in much journalism today, which perceives kids solely as one-dimensional consumers.

It may not feel good, but it reads exceptionally!

Published by Thriftbooks.com User , 18 years ago
As a writer myself, and one often accused of being too obscure with his musical references, I had no choice but to enter NOTHING FEELS GOOD with a bit of an open mind, knowing that Andy Greenwald faced a challenge with me and that I had to extend him the same courtesy I would want extended to me. Greenwald was writing about bands I couldn't care less about, and some I openly hate. I didn't own a single record by any of the groups featured. He had a tough job ahead of him.So, it's a real testament to Greenwald's abilities as a writer that I was completely sucked in. A foreknowledge of bands like Jawbreaker or Thursday is not required, because Greenwald is going to explain them to you. He is going to tell you what the music is like and contextualize it, put it in a framework that will hip you to why these bands have so many devoted fans. Sure, you can hem and haw about the name "emo"--but the author does too. It's a term for a subculture that doesn't want to be tagged or codified, and it's a subject that is wrestled with by this book. And once we get past that, Greenwald cracks it open and unveils the positives of a movement that often gets derided, revealing why it works for the people it works for and its place in our modern age. If there is anything to complain about when it comes to NOTHING FEELS GOOD, it's that Greenwald does his job TOO well. He made me think every one of the bands discussed was fantastic. Sadly, I sampled a lot of it, and for the most part, it failed to live up to the wonderful images Greenwald created in my head. However, his electrifying portrait of Dashboard Confessional's Chris Carrabba was quite seductive, and I couldn't shake it. It pushed me to approach the material fresh, and now I am a fan and have sought out whatever I could find by the band. And isn't that the sort of reaction music writing should inspire?
Trustpilot
Copyright © 2022 Thriftbooks.com Terms of Use | Privacy Policy | Do Not Sell or Share My Personal Information | Accessibility Statement
ThriftBooks® and the ThriftBooks® logo are registered trademarks of Thrift Books Global, LLC