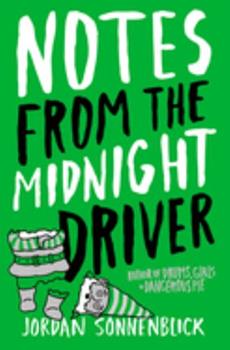 Notes from the Midnight Driver

"Alex Peter Gregory, you are a moron " Laurie slammed her palms down on my desk and stomped her foot. I get a lot of that. One car crash. One measly little car crash. And suddenly, I'm some kind of convicted felon. My parents are getting divorced, my dad is shacking up with my third-grade teacher, I might be in love with a girl who could kill me with one finger, and now I'm sentenced to babysit some insane old guy. What else could possibly go wrong?...

Even better than Drums, Girls and Dangerous Pie

Published by Thriftbooks.com User , 14 years ago
Jordan Sonnenblick keeps getting better. NOTES is the story of an angry adolescent - even angrier than most! Alex's parents have gotten divorced and after drinking an excessive amount of vodka, he's going to just drive over and tell his dad how angry he is. Luckily, he doesn't hurt anyone when he crashes the car, but now he is even angrier, because he has to spend time at an old folks' home talking to possibly the crankiest man in the whole place - Sol. Sol's tough love is hilarious, poignant, and ultimately effective. Great book, great read, great for kids just starting to drive or even just thinking about starting to drive. I'm using it with my ninth graders right now, and they love it!

Published by Thriftbooks.com User , 14 years ago
After Sonnenblick's incredibly touching first book, Drums, Girls, And Dangerous Pie, I was wondering if his second book would make me feel as much as his first book did. I am happy to report, I gained even more from this book. Alex is your average high school junior--anticipating getting his driver's license, worring about the SATs, dealing with family and girl issues. That is until he decapitates his neighbor's lawn gnome after getting drunk on his absentee father's vodka and sealing his mother's car for a joyride. But he's the only one who doesn't feel lucky when the judge sentences him to 100 hours of community service at the local nursing home. There he meets Sol, a crotchety old man who's determined to take Alex down a notch or two and help him see he's destined for more than a drunk driving conviction at sixteen. Sol also wants to help Alex become a better guitar player, learn some dirty Yiddish phrases and kindle a romance with his best gal pal Laurie. The book has the classic elements of a good read with some great jazz history, a good plot-twist or two and a little romance. Alex's biweekly letters updating the judge on his "progress" also help to show Alex's development from a troubled teen to a young man willing to take responsibility for his mistakes. With great dialogue and a smart plot, Sonnenblick puts heart and humor into a sad tale of learning to be accountable for your mistakes. Fan's of Drums, Girls, And Dangerous Pie will be excited by the cameo appearances of Steve and Annette, but new readers will fall hard for Alex's quick whit and development. This is a great read, and the lively characters keep the book light even when the harsh realities of the plot threaten to give the book too dark a tone. A great read for middle/high school students dealing with divorce, death of a grandparent, minor legal infractions or just life.

Published by Thriftbooks.com User , 15 years ago
And you think your life is tough. Sixteen-year-old Alex Gregory miscalculated the consequences of his anger when he decided to teach his father a lesson. Nothing good can come of a poorly thought out plan, especially when it entails stealing your mother's car, driving drunk and obliterating a poor unsuspecting lawn gnome. Alex thought it was a great idea at the time. The police and the judge, well, not so much. He was sentenced to hundreds of community service hours in a nursing home, catering to Sol, a cantankerous old curmudgeon who's writing the last chapter of his life. While Alex is doing 'hard time' in a nursing home, his parents are separated, and dad's dating his third grade teacher, he's discovered his childhood friend, Laurie, is pretty 'hot' and the judge isn't buying his written declarations that he's not qualified to help with Sol's problems. It's enough to send a guy to his room to play the blues (or maybe jazz) on his guitar. Never underestimate the power of tough love. Alex and Sol navigate the generation gap and forge the relationship of a lifetime. Personal responsibility and giving people (especially parents, because they really are trying) a second chance is the lesson of the day. And you'll never see the twist coming, and it'll warm your heart. Sonnenblick delivers a great story with snappy patter wrapped up nicely in a life lesson. I laughed and I shed some tears. And I decided Notes From the Midnight Driver is a must read. Armchair Interviews says: Nice to have more quality books for young adults.

Published by Thriftbooks.com User , 15 years ago
Come ride along with Alex. Frustrated by his parent's divorce, Alex "borrows" his mother's car to pay a surprise visit to his father, who just happens to be dating Alex's former third-grade teacher. To work up the courage for this visit, Alex has had a bit too much to drink. His midnight drive ends in the neighbor's yard and involves a decapitated lawn gnome and vomit on a police officer's shoes. Community service at a nursing home is Alex's punishment. His mother arranges for him to spend time with Sol, a resident in the facility where she works. Sol is the most contrary patient at the home, and he outdoes himself in making Alex miserable. Alex's complaints to the judge handling his case are dismissed with comments about how Alex and Sol will be good for each other and can both learn from the experience. Alex and Sol do find they have a few things in common. When Alex brings his guitar along one day, he discovers Sol likes jazz and finds the old man does have knowledge to share. As the visits continue the two develop an unusual friendship. NOTES FROM THE MIDNIGHT DRIVER is Jordan Sonnenblick's second book. For any fans out there, Sonnenblick ties this new book to his first, Drums, Girls, And Dangerous Pie, by bringing back several characters. Also, as in his first book, Sonnenblick works in a little romance along with music and some great humor. He captures the zany, frustrating emotional roller-coaster of the teenage experience. Reviewed by: Sally Kruger, aka "Readingjunky"

Published by Thriftbooks.com User , 15 years ago
"You would think I'd have been pretty scared by this point, but because I had drunk so much vodka so fast, I was still getting drunker by the second. Even with my hands cuffed behind my back -- and the cuffs were REALLY tight, because the officer hadn't been enjoying me much so far -- I was like a little one-man house party in the back seat of the cruiser. The last thing I remember was getting bored of the dispatch radio, and shouting, 'Change the station! Get me some ROCK!' " Have you ever turned on the TV and heard someone who has scored a multi-million dollar lottery jackpot boasting about the skill it took to win? Of course, not! There is no skill involved in buying the winning ticket out of those hundreds of thousands of entries. It's purely the luck of the draw. Well, I won the lottery as a teenager. A bunch of times. On numerous occasions I drove legally drunk. On special occasions I drove blind drunk. And it turned out that I was one of the few, the chosen, the lucky ones who never hurt themselves or anybody else while in that condition behind the wheel of an unforgiving, speeding mass of metal. I wasn't good. No, I was lucky. There were back then, and still are, lots of other teens and older folk killing or being killed in this fashion on a daily basis. And, no, I can't help wondering sometimes where I would be today if the wrong number had suddenly come up for me on one of those long-ago Friday nights. Sixteen-year-old Alex Gregory will be waiting quite a while now before getting his driver's license. Upset over his parents splitting up and his father moving out, Alex marks the evening of his mother's "first date" by drinking a significant quantity of the vodka his father left behind, finding his mother's keys, and getting behind the wheel of her car. But Alex is a big money lottery winner: The only victims of his near-tragic judgment are Mrs. Wilson's French lawn gnome and the cop whose shoes and walkie-talkie Alex pukes all over after Mom's car comes to rest in Mrs. Wilson's azalea bushes. It's that same cop who delivers the intoxicated, mildly injured teen to the desk sergeant down at the precinct house. "Then I got the marvy idea that maybe I could just wipe the blood off my head first. I pushed my hair all the way up off my forehead, the alcohol-soaked wipe touched my wound, and I sobered up REAL fast, just as Sarge was putting his cup of steaming liquid on the desk blotter. " 'Ooooowwwww!' I screamed. Up I jumped. Up jumped my arm. Up jumped the handcuff. Up jumped the desk. Up flew the coffee. " 'Ooooowwwww! screamed Sarge. Sarge was wet! "Eventually the sodden mass of paper, blood, wipes, and coffee was disposed of by a guy in rubber gloves. Sarge found a new pair of pants, and came back. He took a really long look at my forehead, the mixture of blood, snot, and tears that was flowing freely across my facial features, and the moist abstract painting that had been his desk blotter, and decided to use a trick which alw
Copyright © 2020 Thriftbooks.com Terms of Use | Privacy Policy | Do Not Sell My Personal Information | Accessibility Statement
ThriftBooks® and the ThriftBooks® logo are registered trademarks of Thrift Books Global, LLC