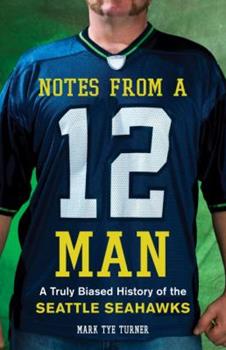 Notes from a 12 Man: A Truly Biased History of the Seattle Seahawks

Before Richard Sherman and Russell Wilson, there was Steve Largent and Jim Zorn As the Seattle Seahawks prepare for Super Bowl XLVIII, football fans will enjoy this rollicking team history as seen through the eyes of an obsessive fan. Since the franchise's beginnings more than 30 years ago, there's no doubt who has been the greatest member of the Seattle Seahawks. After all, who was there at the opening of the Kingdome only to watch that fabled stadium,...

Could not put this book down...

Published by Thriftbooks.com User , 13 years ago
As I picked up this book, I found myself absolutely RIVETED to it. I could not put it down until I finished it. I loved every page, and was only disappointed when I reached the end of the book itself. In this book, Mark Tye Turner reached into the minds of sport fans everywhere. He reached out and struck a chord with sport fans around the world. He showed the joy and sorrow of all fans of all sports. This is a wonderful book, not only for Seahawk fans, but for anyone who has endured the many ups and downs with their favorite sport team. Mark Tye Turner really accomplished an uncanny ability to express his emotions intertwined with his love of a sport team. As a Seahawk fan, I took great delight in sharing common experiences with Mark Tye Turner in this book. As a fan of a sport team, I know that I would certianly appreciate another fan's loyalty and devotion to his team. Thank you, Mark Tye Turner for a brilliantly writeen book from the life of a true fan.

A must-have for every Seahawks fan!

Published by Thriftbooks.com User , 13 years ago
I've read this book cover to cover, and it's truely one of the best books I've ever read! It's entertaining and gives a true 12th Man prospective. I highly recommend this book to anyone and everyone that's a Seahawks fan. If you don't have a copy, GET ONE! Perfect Christmas present for the Seahawk fan in your life!

Great even for non Seahawks fans

Published by Thriftbooks.com User , 13 years ago
OK, I'm a "bleed black and gold" Steelers fan. And I was annoyed by all the Seahawk fans who whined about the referees when the Steelers beat the Hawks in Super Bowl 40. But I loved this book. I mean really loved this book. It's about being a rabid sports fan, and having an encyclopedic knowledge of a team's history. Living and dying on every snap, extra point and fake field goal. And it gave me an appreciation for what it was like to be an expansion franchise fan. It's painfully honest and absolutely hilarious. An easy read that is hard to put down.

This is a must read for any Seahawk Fan!

Published by Thriftbooks.com User , 13 years ago
This is a must read for any Seahawk Fan, whether you suffered through the lean years from 1976 on, or fell in love with the team during their Super Bowl run in 2005. Being a life long fan of the Seahawks, but also a life-long resident of NY, I would only get to see them in ESPN highlights or in the one or two national games each year. Mark's book vividly recreates the drama and tension of key games throughout the history of the Seahawks, and provides the details and context that I was unable to get from 10 second video clips and newspaper box scores. His passion for his hometown team comes through in every sentence, and he has a great sense of humor, which has definitely been a requisite to be a Seahawks fan over the years. As I watch the current team hopefully mount another Super Bowl-caliber season, I can't help but imagine how Mark would describe these recent games and current players, and find myself eagerly anticipating a sequel!

Reveiw from a 12th Man

Published by Thriftbooks.com User , 13 years ago
A must have for any Seattle Seahawk fan, or anyone that is interested in the phenomenon of Seattle's 12th Man! Mark takes you back through the good times and bad times of the Seahawks history. I found myself whisked back in time remembering games, plays, coaches, players and even the evil Ken over-Bearing. The long time fans will love the walk down memory lane. New fans will learn much about the history of the Seahawks and why the 12th Man is the loudest, proudest fan base in NFL Football! A GREAT READ!
Trustpilot
Copyright © 2022 Thriftbooks.com Terms of Use | Privacy Policy | Do Not Sell My Personal Information | Cookie Preferences | Accessibility Statement
ThriftBooks® and the ThriftBooks® logo are registered trademarks of Thrift Books Global, LLC