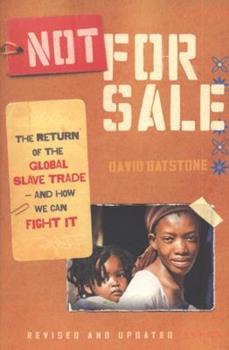 Not for Sale: The Return of the Global Slave Trade--And How We Can Fight It

"Human trafficking is not an issue of the left or right, blue states or red states, but a great moral tragedy we can unite to stop . . . Not for Sale is a must-read to see how you can join the fight." --Jim Wallis, author of God's Politics"David Batstone is a heroic character." --BonoIn the revised and updated version of this harrowing yet deeply inspirational expos , award-winning journalist David Batstone gives the most up-to-date information available...

Published by Thriftbooks.com User , 15 years ago
This is one of those books that makes you want TO DO SOMETHING. Every chapter is a story of a slave, their slave owner, and the person and persons who rescues them. There is too much information and too many statistics to remain unchanged after reading it. There is a chapter on the invisible children in Uganda who are kidnapped by the Lord's Resistance Army and forced to kill the adults in their village. The younger girls are given as wives to the older boys. If you caught trying to escape you are gang murdered. Thank God for the work World Vision and other organizations are doing to rescue them! There are chapters about sex slaves who are transported to America and other countries to be prostitutes. This is a well researched book to a huge problem that must be addressed.

Slavery ended in the Civil War - or did it?

Published by Thriftbooks.com User , 15 years ago
Slavery ended in the Civil War - or did it? Actually there's a thriving modern business in slavery: some 200,000 people live enslaved in the U.S. today - that's the hard-hitting message of NOT FOR SALE: THE RETURN OF THE GLOBAL SLAVE TRADE AND HOW WE CAN FIGHT IT. These people have been sold into slave labor and prostitution within this country and others: Batstone traveled to five continents to investigate human trafficking and documents here both victims and slave trade rings.

Published by Thriftbooks.com User , 15 years ago
This book is moving. It is a great survey of SOME of the many deminsions of slavery today worldwide. It may move you to tears but it will also hopefully inspire you to become an abolishionist according to your own abilities, education, and passions. I would recommend this book to anyone just now becomming aware of this global tragedy. Batstone balances stories of the enslaved, what the ordinary abolishionists are doing, and information on the system that facilitate the oppression that this issue begins to make concrete sense.

An awful book -- What will you do about it?

Published by Thriftbooks.com User , 15 years ago
I have been working in Relief and Development for 26 years in Asia, particularly in war zones, refugee situations natural disasters, civil unrest and major social issues like trafficking. David Batstone gives a terrible, graphic picture of slavery in the 21st century from just about every continent. It grabs your heart and will not let you go. This issue will require the same kind of perserverance that William Wilbertforce overcame in abolishing slavery, changing laws and worldviews in the UK in the 18th century. We have had the privilege of supporting the work of Pierre and Simonetta Tami and the Hagar Project in Cambodia since its inception. We have seen upclose the horror and pain of children as young as 6 years being sold, trafficked and abused. This book tells those stories in graphic, unbelievable detail from countries like Uganda, Thailand and Cambodia. These stories are not about statistics but about people with names and families who have endured hell, been scarred for life or have been killed in the process. You will not believe it, then you will become furious that this is happening today. It also shows ordinary people that are a voice for the voiceless and are making an incredible, difference. There are just too few of them. Maybe, you will ask yourself, "How do I get involved in this global effort?" This book is a call to action. Don't buy this book unless you are ready for engagement in a loving, compassionate fight against the evils of the 21st century slave trade. G. Stephen Goode Bangkok, Thailand

Overwhelming but a MUST-READ

Published by Thriftbooks.com User , 15 years ago
This is the first book that I've read about this crisis that does not rely on statistics and studies to tell the story of modern slavery. In poignant interviews Batstone reveals the miserable reality of the invisible people who care for the rest of us every day. Modern slaves cook, clean, sew and build our world and in return we turn a blind eye to their situation or even their existence. If you care at all about your fellow human beings you will read this book, share it and take action. Batstone outlines several ways to take action and lists several resources available to all of us. Their lives and our souls are at stake if we don't start making changes and demanding change in others NOW.
Trustpilot
Copyright © 2022 Thriftbooks.com Terms of Use | Privacy Policy | Do Not Sell My Personal Information | Cookie Preferences | Accessibility Statement
ThriftBooks® and the ThriftBooks® logo are registered trademarks of Thrift Books Global, LLC