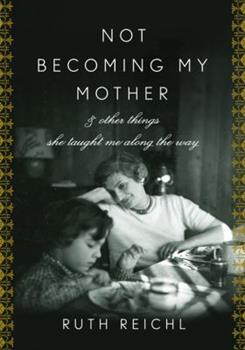 Not Becoming My Mother: and Other Things She Taught Me Along the Way

Bestselling author Reichl embarks on a clear-eyed, openhearted investigation of her mother's life, piecing together the journey of a woman she comes to realize she never really knew.

Published by Thriftbooks.com User , 12 years ago
Once I started this, I couldn't put it down. I sometimes find Reichl a little harsh in the way she describes people (Garlic & Sapphires), but in this case, she found a good balance between accuracy and compassion as she stands up to the incredibly loaded task of memorializing her mother. Also - I see a lot of reviews that say it was too short & a bit detached in tone, but I thought the tone and length were perfect -- Reichl didn't waste words or get too detailed, the downfall of so many memoirs these days. She got right to the heart of her mother's story and portrayed her in a very honest, yet loving, light. And for anyone out there who liked this book ... I'd recommend another well-written, non-smarmy tribute to a complicated mother -- "On Her Trail: My Mother, Nancy Dickerson, TV News' First Woman Star" by John Dickerson.

Published by Thriftbooks.com User , 12 years ago
Yes, it's small and if you're looking for another of Reichl's complex food memoirs, you will be disappointed. Instead, this is a moving account of how Reichl rediscovered her mother through her mother's letters and notes. Reichl's first memoir, Tender at the Bone, contained a lot of her mother and most of what was there was difficulty-- a mother mental illness with no talent for being a homemaker. This new work examines why her mother was a homemaker at all and the resounding answer is that she, like so many other women at that time, had no other choice. In the end, what makes this book truly revelatory is that fact that it does the work that so many daughters cannot-- she tells her mother's story and by telling that story, Reichl comes to understanding. Then you can feel forgiveness in the pages and that forgiveness transformed into gratefulness. This book wasn't what I expected at all but I am so happy to have found it.

Truly Revelatory Memoir Written with a Mix of Frankness and Funniness

Published by Thriftbooks.com User , 12 years ago
It's Mother's Day, so books about mothers and daughters, and relationships both good and bad, are everywhere. Therefore, it's not surprising that this week I read NOT BECOMING MY MOTHER by Ruth Reichl. After a trio of wonderful, funny and honest memoirs about her life --- as a chef, as a critic and writer, as a mom and wife, as editor-in-chief of Gourmet Magazine --- Reichl has moved into the most personal territory she's encountered in all her travels: her life with her mother. Or, rather, the life she is living because of her mother that she didn't realize she is living because of her mother. Does that make any sense? In NOT BECOMING MY MOTHER, Reichl argues that the letters she found after her mother passed away became an illumination into the sacrifices and suffering her mother endured in a time when women didn't have the opportunities they do now --- suffering that made possible the opportunities that young women today take for granted. Reichl's mother, Miriam, wanted to be a doctor, but ended up opening a bookstore instead, enchanting and befriending scores of famous friends and suitors throughout the endeavor, including Max Eastman and Bertrand Russell, who carried a major torch for her. She was smart, but not beautiful in a conventional sense, something that would plague her thoughts throughout her life. Her letters and remembrances are replete with these types of sadness --- and a depressive nature that she hoped she wouldn't hand down to her daughter. Miriam wanted her daughter to enjoy the benefits of both beauty and intelligence. Of course, as Reichl points out, she came of age in the '60s, in a time when love and fancy weddings and everything else from Miriam's world was done at an angle, with a twist, with an edge. Reichl rebelled against the expectations of what she thought was her mother's kingdom, when, in actuality, her rebelling was exactly what Miriam wanted, in a sense. The portrait of her mother is unerringly honest; there are dark and light truths mixed together to make a positive and fascinating story. Reichl has had opportunities and reached places her mother could only have hoped to see. However, the sentiments that she encounters in her mother's letters make for a truly revelatory memoir, written with her usual combination of frankness and funniness. This Mother's Day, the medium is a message: NOT BECOMING MY MOTHER is a story all mothers and daughters will understand. --- Reviewed by Jana Siciliano
Copyright © 2020 Thriftbooks.com Terms of Use | Privacy Policy | Do Not Sell My Personal Information | Accessibility Statement
ThriftBooks® and the ThriftBooks® logo are registered trademarks of Thrift Books Global, LLC