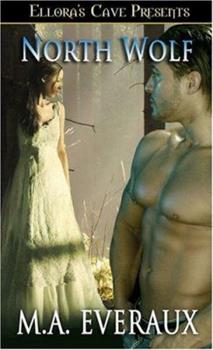 Gwen Branson has a problem. It's not that she's spent the last four years of her life in a mental institute, or that her father is dead and her mother's driving her crazy. Her problem is that she's... This description may be from another edition of this product.

Published by Thriftbooks.com User , 12 years ago
It's a shame that M.A Everaux has not written anything else. This was a fantastic story. It contain everything a paranomal/erotica novel should have, even after reading the book, I went back a week later just to read it again. I'm hooked, hope this was not her last.

Published by Thriftbooks.com User , 12 years ago
At first I thought I was purchasing another "Lora Leigh" type of novel and I wasn't too far off. M.A. Everaux gives us a slightly kooky intro into her werewolf story by setting it, of all places, in a mental institution. Christian, a werewolf, finds himself in said institution during a "full moon" period and he doesn't want to stay there any longer than necessary. His big brother comes to get him out and in the process, discovers a young woman, also incarcerated (apologies to all the fine mental health workers out there) for having: A. Seen a werewolf and B. Trying to commit suicide. The two weres decide to take her with them. The story has it's limitations and slight faults (the heroine Gwen does do some dumb things...but hey, didn't we all when we were 22?!) But overall the book delivers and I for one can't wait to see what M.A. Everaux will do next.

Published by Thriftbooks.com User , 13 years ago
Gwen Branson has lived for four years in a mental institution. Gwen was committed by her mother after she claimed to have seen a werewolf savaging a woman the night her father died, her confusion and horror driving her to attempt suicide. Despite living in a drugged state behind the bars of the hospital, Gwen finds comfort in drawing the creature of her nightmares, knowing it to be real. It is one of those drawings that indirectly brings her to the attention of sexy alpha Were, Eben Lowell. Eben Lowell is charged with protecting his pack. Humans proclaiming the existence of his species are a threat to the pack's security and must be eliminated. But Gwen cannot be treated like any other threat that has faced Eben's pack. For she's not your average human, she's Eben's human mate. Wooing his human mate is not Eben's only challenge. He is also assuming the mantle of pack leader from his adoptive father, Conner, and the transition isn't going smoothly. Challenged for supremacy by the vicious Theron, Eben must protect Gwen from retaliation and attack by Theron and his supporters. With the help of Connor and his adopted brother Christian, Eben must face the challenges before him. Can he keep Gwen safe in his quest for pack leader? Will he win Gwen's acceptance, heart and soul? I couldn't get enough of North Wolf! I lost sleep, refusing to stop, awake at dawn, reading this book. Even after finishing it, I savored the characters. Eben, so dark and intense, Alpha in every sense of the word. Gwen, gaining her strength of body as well as strength of spirit. Connor, a kind-hearted artist and loving father. Christian who is free-spirited, handsome and good-natured, but tough. Ms. Everaux did a splendid job at character development, giving all of the characters distinct personalities and bringing them to life. If you love Weres, you'll love this book. Even if you don't love Weres, you will love it! There's growling, nipping, amazingly erotic sex, sweet love and friendship. Unfortunately the story ended before I was ready! I want more! I can only hope that Christian's story is to be published soon, for I long for it already. Annabelle reviewed for Joyfully Reviewed

Published by Thriftbooks.com User , 14 years ago
That's what I was from the moment I read the first page until I finished the very end. To this day I continue to think about the characters in this book and I purchased it when it was first published in the summer of 2007! The love story was HOT but there were also parts that were laugh-out-loud funny. I look for other books by this author at least once a week but so far I've only found one other book she's written through the Ellora's Cave publishers. Get to writin' M.A. Everaux!