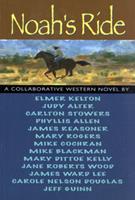 Naked Came the Stranger set the format, but not always the tone or subject matter, for a whole string of books that appeared in the 1970s. Called collaborative or serial novels, the multi-author works were set in the suburbs, the Blue Ridge Mountains, Florida, the American West, but never in Texas. Now a dozen Texas authors have gotten together to create a good old-fashioned western novel. Each contributing author will write a chapter that builds...

Collaborative Novel is a Showcase for Writers' Talents

Published by Thriftbooks.com User , 14 years ago
Most everyone knows what a collaboration is: two or more people working together toward a common end. Lennon & McCartney, Penn & Teller, Roosevelt & Churchill. But a serialized collaborative novel, like Noah's Ride, is a different kettle of fish altogether. In an Editor's Note at the end of the book, TCU Press editors Judy Alter and Jeff Guinn explain how the idea for Noah's Ride was formulated. A group of writers in the Fort Worth area met to brainstorm a collaboration. A character was created, Noah, a plantation slave who escapes to Texas during the Civil War. The writers took it from there, each contributing 5,000 words apiece. The first writer out of the gate is Elmer Kelton, who gets the story off to a suspenseful start. Kelton, with his knowledge of character development and his broad expertise in American history, immediately plunges the beleaguered Noah into trouble so deep and dangerous, that when he runs for his life astride a worn-out work mule, the reader goes willing, heart in throat, hoping the runaway Noah will make it across the Mississippi River. Chapter by chapter the book is handed off to the next writer in line, a lot like runners in a relay race. There can be no preparation for writing like this. The writers read the preceding chapters and chose to take up the story where the previous writer left off or to send it in a new direction. The thirteen writers in this collaborative effort split almost equally in their choices. The result, while a bit uneven at times, is great fun to read. You can sense the fun the writers had as well. One or two chapters are oddly out of sync, and with these I went along kicking and squirming to get back to the original thread. But the delight of this book is in hearing the different voices, and in watching the plot build in unexpected, often rollicking, ways. There's something here for anyone who loves western fiction: poker and whiskey, kidnapping and chase scenes, a cavalry battle with horses aplenty, love and childbirth, revenge and reunion. And if there is a plethora of characters who come and go willy-nilly through the pages, there is always the stalwart Noah riding steadily and heroically throughout the story. As the editors say in their Notes: "We don't intend to submit Noah's Ride for a Pulitzer, but we do think it's a great showcase of what author's can do in collaboration. And it's a pretty good western novel!" I'll second that.
Copyright © 2020 Thriftbooks.com Terms of Use | Privacy Policy | Do Not Sell My Personal Information | Accessibility Statement
ThriftBooks® and the ThriftBooks® logo are registered trademarks of Thrift Books Global, LLC