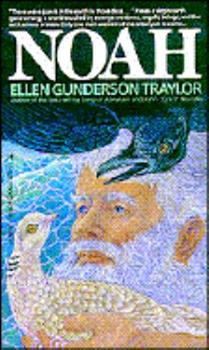 There were giants in the earth in those days..." It was a virgin earth gone wrong: a world touched by strange creatures, angelic beings, and the wickedness of men. Only one man warned of the cataclysm... This description may be from another edition of this product.

Published by Thriftbooks.com User , 15 years ago
From the first chapter this book really drew me in. It is an account of what times were like in the pre-flood era. She pulled from many resources outside the bible, and within. This is, however, fiction, but the concepts that the author puts forth make for interesting reading. Especially since the climate (among other things) was different prior to the flood (no rain, no change in seasons). Many who worshiped the sun (aka Satan) had no roofs on their homes. It's interesting to see things played out on her premise that demons lived on earth among men & women in plain view. They were considered Gods, lived in elaborate palaces, and were worshiped by the masses. These demons were attracted to the "daughters of Eve" and took them as wives. With demons playing such an obvious role in leading men & women astray, its easy to consider how Noah & his family were the only righteous ones permitted on the ark. I did like how the author portrayed God's mercy by having Noah preach frequently to the masses proclaiming truth and urging them to repent.

Noah is a great read

Published by Thriftbooks.com User , 16 years ago
This is a fascinating take on the Old Testament story of Noah. ... very scripturaly correct, well written, easy to read. I recommend anything by this author!

A Brick To The Side Of The Head

Published by Thriftbooks.com User , 16 years ago
When I picked this up used, at at a church sale, I had no idea what I was getting myself into! This, for want of a better term, Christian Science Fiction novel will change the way you view Noah and the antediluvian age. Ellen Gunderson Traylor started with the perfectly logical premise that if the Biblical Flood actually happened, then the legends about Atlantis MUST be referring to the antediluvian world and took off from there. The result is a fascinating journey through an alien but all too familiar world that will have you thinking, "Maybe this IS how it happened, or something close to it." Her theory about Noah's wife I found particularly apt! Note: some critics seem to be hyperventilating about Traylor's interpretations of a few key verses. While it is certainly true that Traylor's interpretations are by no means definitive, they are well within the mainstream of Biblical scholarship. Even I personally don't agree with all of them, but I am not in the least offended by her take on them and frankly wonder about those who are. This is FICTION after all, though fiction that will REALLY make you think!

Published by Thriftbooks.com User , 16 years ago
As the author, I would like to respond to the critique regarding my theory of the "sons of God." No one could be more surprised than I was by the concept I endorse in NOAH, when I first came across it in the early stages of my research. Many of the most highly respected Christian scholars give credence to it in their works. Examples: Merrill F. Unger, a conservative Biblical commentator (Unger's Bible Dictionary, Unger's Bible Handbook, etc.), and W. F. Albright, renowned scholar of Middle Eastern studies, both endorse this theory, and Tyndale House, one of the most Biblically sound publishers, eagerly accepted the book. Likewise, ICR (Institute for Creation Research) reviewed it very favorably upon publication. The angels are often referred to in the Bible as the "sons of God," whether they are the fallen angels or the good angels (see the story of Job, where the sons of God twice came before the Father, and among them was Lucifer!). Many scholars also interpret Jude 6,7 as relating to some sort of fornication on the part of fallen angels. To interpret Genesis otherwise does not satisfy the context: if the "sons of God" were righteous humans, and the "daughters of men" were less than righteous, then why would the two marry? And where do the Nephilim ("giants," or "fallen ones") fit into the scenario, if they are not the implied offspring of unnatural and unholy unions? The theme of the story of Noah is that sin had become rampant because of the activities of the perverted human race, but this perversion was not necessarily strictly human in origin. If Jude refers to the Noahic angels in his comments, they were not destroyed by the flood but were sent to Hades to await their own judgment. This did not prevent this sort of thing from ever happening again, however, as Genesis 6:4 says that the Nephilim were in the earth in those days, "and also after that." This is material for another story! As for my critic's comment on the technology of the age, if it was as advanced as I suggest, it would not assure spiritual clarity, nor would it protect anyone from God's wrath. Regardless of your views on these topics, I hope you will read and enjoy NOAH. If it does nothing more than give you food for thought, I will be grateful.

Published by Thriftbooks.com User , 20 years ago
From the very first page, I completely enjoyed this book. Ms. Traylor warned you from the very beginning how she went about putting this book together. She brought the Bible, ancient myths & legends, and research, among other things together for it. Not only was the book just fascinating reading, it makes you go; "HHMMMM. Could this be close to true?" She did not contradict anything that the Bible says, (she never does) what she did is thoughtfully and delightfully filled in a picture. This is one book that should be passed around, it is that enjoyable for reading.If you like a good fiction that makes you wonder about possibilities, get this one.
Trustpilot
Copyright © 2022 Thriftbooks.com Terms of Use | Privacy Policy | Do Not Sell My Personal Information | Accessibility Statement
ThriftBooks® and the ThriftBooks® logo are registered trademarks of Thrift Books Global, LLC