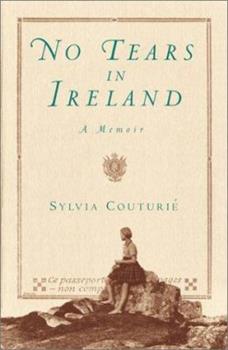 No Tears in Ireland: A Memoir

On a cool, end-of-July morning in 1939, eleven-year-old Sylvia Couturié and her eight-year-old sister, Marguerite, escorted by their Irish nanny, "Wally," left their family's elegant French château... This description may be from another edition of this product.

A Teenage Girl's Tragic Coming of Age During WWII

Published by Thriftbooks.com User , 19 years ago
In this true-life story about her life during the WWII years 1939-45, Sylvia Couturie reminds us of the often ignored fact that the horrors of war also engulfed children, many of whom were sent by their parents to far-off lands in order to be safe from the invading Germans. No one knew, when Sylvia and her little sister Marguerite were taken by their Irish nanny back to Ireland for a month in August 1939, that the children would not see home again until February 1945. Sylvia takes us from her idyllic childhood years, growing up in a wealthy French family in the Chateau le Mesnil located in Normandy, to the desperate poverty inforced by an overly strict and calculating nanny, in a wreck of a cottage by the stormy Atlantic. There they had "no electricity, no running water, no bathroom, and the lavatory was outside down three steps next to the kitchen door". The nanny refused opportunities for their education or better housing. Fiercely Catholic, she shunned opportunities for the children to be educated or to have playmates for fear that their minds might be poisoned by the Protestants. Wally, the nanny, claimed to have been given sole guardianship of the children "for the duration". Ms. Couturie's writing is cleverly absorbing as, by leaving out the answers to questions which arise in the reader's mind, she exemplifies the wasteland that was her life during those most important years when only her body and instinct for survival grew from little girlhood to womanhood. Using this technique, she carries the reader along with the suspense of not knowing the answers to obvious questions, thereby creating in the reader's mind the very void that was her life during the years of WWII. The fact that she writes this memoir more than 50 years after the fact is a testimony to the life-long effects of the tragedies of war. Recommended for all ages, but especially for middle and junior high school libraries.
Trustpilot
Copyright © 2022 Thriftbooks.com Terms of Use | Privacy Policy | Do Not Sell or Share My Personal Information | Accessibility Statement
ThriftBooks® and the ThriftBooks® logo are registered trademarks of Thrift Books Global, LLC