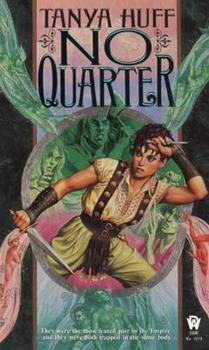 (Book #3 in the Quarters Series)

Bannon and Vree, a brother-and-sister assassin team, must share Vree's body when Bannon's is stolen from him, and they begin a desperate quest into a neighboring kingdom to regain Bannon's body from Gyhard.

Published by Thriftbooks.com User , 15 years ago
I didn't think it was possible for Tanya Huff to write a book better than Fifth Quarter. Boy, was I wrong. This book was outstanding. End of story. Buy it, read it, enjoy it, read it again! The thing I like best about this book and Tanya Huff's style in general is that her characters are always well developed and very believable. And they all grow. Vree and Gyhard's relationship really develops in this book and by the end you are very satisfied. Don't, of course, read No Quarter until you've read Fifth Quarter, which is equally compelling.

Published by Thriftbooks.com User , 16 years ago
I completely loved this story and did the first time I read it when it was originally published. The quality of the book sent to me was as good as if I'd bought it as a new release in a book store. Tanya Huff is an author that draws you into the world she's created with well written characters and a storyline with a completely fleshed background including religious dogma and a belief system that is believable.

Published by Thriftbooks.com User , 19 years ago
I love the character development and the changing relationships between the characters. Tanya Huff gives us a lot of action, suspense, and different forms of love: romantic, sibling-love, friendship, and love twisted by madness & bitterness. The writing is deep without being overtly philosophical. No Quarter is a fast-paced, edgy story about Gyhard, a man without a body of his own, sharing the flesh of Vree, the woman he loves. Vree is a former assassin, pursued by her brother, who wishes them to return to the army--and who wishes to kill Gyhard. And in the middle of this turmoil, an ancient, insane murderer walks, raising the dead around him. The old man still loves Gyhard, but the only way he could get Gyhard to stay with him would be to kill Gyhard and Sing his living kigh back into his dead body...A truly excellent read.

Just as good as Fifth Quarter!

Published by Thriftbooks.com User , 22 years ago
I doubted that No Quarter could possibly be as wonderful as Fifth Quarter, but I was wrong. This book is interesting, a real page-turner. The characters maintained their personalities, something some authors fail to do. The action was surprising when it appeared, completely unexpected at times. This is a thrilling book!

Published by Thriftbooks.com User , 22 years ago
What can I say, I love a good book. This by far, is a great book. I'm someone who reads Mercedes Lackey, Andre Norton, Garth Nix and Tanya Huff. Gyhard and Vree, quite possiably a couple who would die for each other if things ever came to it. Its a great suspense, Tanya keeps things in perfect unison with her stories, entwining the lifes of tons of well developed characters. Its definatly a page turner, and once I started reading her books, I was prone to go out and buy all of her others. If your in the mood for a well-written story, Tanya Huff is definatly the author to look into...
Trustpilot
Copyright © 2022 Thriftbooks.com Terms of Use | Privacy Policy | Do Not Sell My Personal Information | Accessibility Statement
ThriftBooks® and the ThriftBooks® logo are registered trademarks of Thrift Books Global, LLC