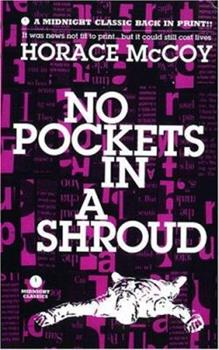 No Pockets in a Shroud (A Mask Noir Title)

In the city of Coltron, Mike Dolan wages a lone war against corruption. Surrounded by lies, he wants to print the truth in his paper. Mike's friends try to stop him with words, but his enemies try lead pipes and bullets.

The Focus Is On Strong Issues

Published by Thriftbooks.com User , 18 years ago
This book takes aim at the newspaper industry, particularly at the reluctance of newspaper bosses to print stories about certain criminal elements. The problem being, these criminal elements provide the bulk of the paper's advertising revenue and would take a dim view of reading about their own activities in the paper. Protagonist Mike Dolan becomes increasingly frustrated with this attitude, so much so, he quits his job and seeks another avenue of bringing the cities corrupt to the public eye. Dolan wants to make a difference, he believes that he can write the kind of expose stories that will actually fight corruption and put some people behind bars.His solution is to start his own magazine, which he names The Cosmopolite and plans to make it a magazine that won't be afraid to tell it like it is. In fact, he sub-titles the magazine with the words "The truth, the whole truth and nothing but the truth". So intent is he on revealing the truth and seeing that the guilty are exposed, he completely ignores the fact that the toes that he steps on belong to some pretty mean people who won't be willing to stand by and be exposed without fighting back. Undeterred, he determinedly continues to produce his magazine, living by the phrase, "publish and be damned".Written so many years ago (in 1937), yet the issues raised here are just as relevant today as they were then. Freedom of speech, racism, abortion, corruption in big business, are all still big issues that only the reckless or very courageous are willing to speak out about.

The hardest novel about corruption in the city

Published by Thriftbooks.com User , 19 years ago
After achieving his masterpiece, "They shoot Horses, don't they?", Horace McCoy built a strong novel, "No Pockets in a Shroud", which definitely settled his reputation in America, as a "caricatural" writer, not even good. He wrote it in 1936 but the novel was published in America only in 1948 (the same year of "Kiss Tomorrow Goodbye" publishing), in a very "light" version (especially the main female character, who turned from a communist to a sex pervert). The book is about institutionalized lying, corruption and racism and it's so realistic, so disturbing... and still so valid today, that it's still censored in America, besides along with the other McCoy's novels and short stories.The story is about Michael Dolan, an angry young reporter who starts a real crusade against hypocrisy and corruption. One of his articles about an arranged base-ball game is censored by his chief and he quits, creates his own newspaper and publishes the articles he couldn't show before, in spite of the system and its powerful elements who try to stop his activities. When he discovers a secret, racist organization looking and acting like the Klan and realizes that its leader are some of the greatest men in the city, able to mutilate other people for what they call "moral" reasons, he doesn't hesitate to write and publish their names and acts. He just broke his future; in the end he's murdered before he can get into the court to confirm what he heard and saw.McCoy was a former reporter in Dallas, for eight years (from 1922 to 1930) and he knows what he talks about. His novel is compelling, written as a script, with very little narration and very much dialog. There is no psychology, almost everything is in what the characters say and do. The novel also has its moments of great humour, from the problems Dolan encounters with the numerous women turning around him. On the whole, a great novel, very tough and largely underrated (except in England - where the book was first published, in 1938 - and France).
Copyright © 2022 Thriftbooks.com Terms of Use | Privacy Policy | Do Not Sell My Personal Information | Accessibility Statement
ThriftBooks® and the ThriftBooks® logo are registered trademarks of Thrift Books Global, LLC