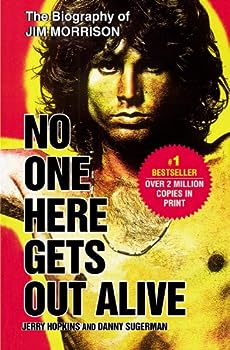 No One Here Gets Out Alive

by Jerry Hopkins and Danny Sugerman

Here is Jim Morrison in all his complexity-singer, philosopher, poet, delinquent-the brilliant, charismatic, and obsessed seeker who rejected authority in any form, the explorer who probed the bounds... This description may be from another edition of this product.

Published by Thriftbooks.com User , 17 years ago
I just finished No One Here Gets Out Alive, the biography of Jim Morrison, and I am left with a selfish feeling of anger that Morrison killed himself through drugs and alcohol and denied the rest of us the pleasure of work he would never complete. I often feel that way when a favorite author/singer/actor dies prematurely. I cannot help it. But, on a more humane level, am also saddened that he could never overcome the forces that drove him to such self abuse. The authors describe Morrison as a brilliant young man, a student of history and philosophy and film. He was a poet and wanted to be known as a poet but his legacy will be that of a rock-star. Morrison's early years, school days and home life are covered. He was an excellent student - when he chose to be. He never seemed to have a good relationship with his father, who was an officer in the US Navy and was therefore away from home a lot. Did this influence Morrison, his attitude toward authority? Well of course, we are all influenced and shaped by our past. But we do not all drink ourselves to death. The authors try to avoid explaining the 'Why's about Morrison and just focus on reporting his behavior and words and allow the reader to try and guess the rest for themselves. He went west to study film and UCLA but that did not go especially well and his student filmmaking efforts were not well-received. After dropping out, he united with Manzarek, Krieger and Densmore to form The Doors. His tumultuous years with The Doors are covered in depth. After reading this, I realize that The Doors of the commercialized 'Best Of' album(s), is a far cry from The Doors in the concert hall. Due to Morrison's behavior, especially in Miami, many cities even banned them from even playing. Morrison was steeped in the rock-star life yet lived a "no-possessions" lifestyle. He abused drugs, moved into alcoholism, slept with many women, could be unpredictable and irrational in the treatment of his friends and ultimately rejected the role altogether. It seems that he may have been turning it around while in Paris but we will never know. It is a shame that he could no pull out of the self-destructive nosedive in time. This is an excellent biography.

Published by Thriftbooks.com User , 21 years ago
"No One Here Gets Out Alive" is always signaled as the definitive biography of Jim Morrison. I see it more as a good read, a very good read. There have been some plausible accusations of serious myth-making taking place in the writing of this book (Ray Manzarek is said to have crossed out "the bad stuff"). James Riordan's "Break On Through" is a better, more-detailed and captivating book in my opinion. But "No One Here Gets Out Alive" plays like what it has been accused of being, a great myth. It is kind of appropriate, considering Morrison is essentially a myth onto himself. His image has not died and the music is still alive and well among the youth (I'm not complaining, hot chicks love "Light My Fire" whenever I put it on). The book is a must for Doors fans, it is a document of the life and times of Morrison, of the era in which he flourished and it celebrates the power and poetry of his songs. It is a neat visual experience in the descriptions of Jim's stage performances and in his primal acts we see a blue-print for the madness we so regularly see in today's rock acts. Reading the book is like reading some kind of modern legend. It is also packed with some great photos of Jim and the band (some album covers are included). The story of The Doors has always been a big epic drenched in excess, insane genius, artistic tenderness and even tragic romance. You can see where all the great songs come from. Jim Morrison was a brilliant artist, his songs are timeless and he was also a fantastic poet capable of creating very captivating images in wonderful songs like "The Crystal Ship" and "End Of The Night," he took us on dark, hypnotic journeys in "The End" and "When The Music's Over" and simply recorded some great music. "No One Here Gets Out Alive" celebrates more the image than the man, and yet is also a fascinating examination of the life. I will never tire of reading Jim's lyrics and hearing The Doors' best songs, "No One Here Gets Out Alive" is a book for fans who feel the same.

Yes, the Doors are a band

Published by Thriftbooks.com User , 21 years ago
Every person has two sides. One is visible at all times. It projects what that person wants thought about him. The other, and the more important one, shows the person himself. A very lucky and select few get the opportunity to glimpse at this side. Jerry Hopkins and Danny Sugerman got their glimpse, and after four years of research, proudly present it to the world.Of course, the obvious is included. Jim was in the Doors. He didn't like authority, and he had a drinking problem. Unfortunately, this is the basis of most biographies. That's why there are 100 books on Abraham Lincoln. But these authors chose to go beyond that, creating a piece of art instead of a manual. They gathered quotes from family, friends, producers, managers, police, and even his favorite books. They pieced together entire conversations. To the best of anyone's ability but Jim's, they showed the man that he was.To write a full-length novel on a person who didn't see his 30th birthday is incredible. To make it enjoyable to read is even more so. With the help of too many people to count, they traced his childhood, teenage and college years, entrance to music, rise to fame, and fall into oblivion. All leading to his mysterious death. They followed his rapid transitions of temperament and progressive changes in wants and beliefs as well as his day to day life.To be frank, there is no need for any other book about Jim Morrison. To write one would be to tarnish the current one, not because it will be greater, but because it will most certainly be worse. To all the fans of the man or his band, and to all who are just curious, do yourself a favor and find this one.

No One Gets Out of This Book Without Food for Thought

Published by Thriftbooks.com User , 21 years ago
First I must tell you that although I like the Door's music, I am not a big fan, in fact I never bought one of their albums. I bought this book for my husband. He's the mega fan, but I'm the book reader. On a whim, I read the forward by Danny Sugerman and was immediatly captured. The rest of the book held me slave as well. The writing is simply well done. And I believe that Danny Sugerman and Jerry Hopkins did their homework and presented the life of Jim Morrison in an unbiased manner. They write of Jim's dark side and addiction, yes, but they also reveal Jim's warmth, humor, and the tumultuous bright mind of a shy boy. What a storm of emotions! Who wouldn't drink to stop the endless flow of feelings and thoughts from a spigot that you can't shut off? This is just one of many interpretations the reader might come away with concerning Jim's self-destructive lifestyle, his fluctuating moods, and his obvious talent for poetic metaphores. This book gives the reader much to contemplate: the struggle of the human spirit, the need for freedom, the desire to express one's thoughts and ideas, be understood, and therefore; be able to share your experience with others. A few previous reveiwers seemed disappointed that Hopkins and Sugerman did not delve into the psychological reasons for Jim Morrison's addiction, but why should they; they are writers not pyschologists? And I felt they tossed out plenty of bread crumbs as to why Jim seemed bent on self-destruction for the reader to think about and draw our own conclusions. In defense of Danny Sugerman (someone commented that he was just the mail boy and a Jim Morrison wanna-be), who would be more privy to the personal exploits and be more qualified to write about your life than someone who opened your fan mail every day and worked in the midst of your busy office? Also, if you read the last inside page of the book, you will find that Mr. Sugerman has written other well-received material since. He's not a one hit wonder who writes only about the Doors. And also on behalf of Jerry Hopkins, aside from "interviewing nearly 200 of Morrison's relatives, friends, and associates" for this biogrophy, Mr. Hopkins has written biogrophies of Elvis Presley, Jimi Hendrix, David Bowie and Yoko Ono. No slouch this guy. I honostly almost did not buy this book because of the negative comments made about the authors. I'm glad I ignored them because if I hadn't, I would have missed out on a wonderful book about triumph and tradgedy and the fascinating life of the tortured poet, James Douglas Morrison.
Trustpilot
Copyright © 2022 Thriftbooks.com Terms of Use | Privacy Policy | Do Not Sell or Share My Personal Information | Accessibility Statement
ThriftBooks® and the ThriftBooks® logo are registered trademarks of Thrift Books Global, LLC