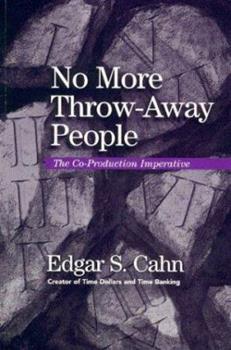 2nd edition. Softcover. Co-Production is a bold, pragmatic strategy for change agents who seek to shape the future, convert failing social programs into catalysts for social justice, enlist... This description may be from another edition of this product.

A Revolutionary Idea Whose Time Has Come!

Published by Thriftbooks.com User , 17 years ago
This book describes a new way of looking at our economic system as well as a new way of looking at people who have formerly been referred to as "recipients of social services." Co-production involves people who receive services in a system that expects them to reciprocate by putting their own talents and abilites to work for the benefit of others. Thereby "recipients" turn into partners whose contributions are valued according to the time spent in delivering services to others in the system. I am a volunteer at the Institute for Disability Studies at the University of Southern Mississippi that is receiving a grant to initiate the first Time Dollar Bank and Co-production System in Mississippi. This book offers many examples of how this system works and what revolutionary changes result from the implementation of this new approach to the delivery of services needed to maintain intact families and effective neighborhoods.

It shows us where we've been going wrong!

Published by Thriftbooks.com User , 21 years ago
In this book, founder of Time Dollars and time banking, Edgar Cahn describes what he calls Co-Production. The book comprises three parts. Part one charts the founding of Time Dollars and the discovery that it was more than just an alternative or complimentary currency. Part two looks at Co-Production in the light of both the market economy and the non-market economy. Part three looks at how Co-Production is working in a number of different situations in the real world.To some extent, this book is the history of the first twenty years of Time Dollars. But it is more than that - much more. People don't like feeling useless; we all need to feel valued - this is one way in which the market economy is so obviously failing a large proportion of the world's population, even in the so-called civilised world. Co-Production recognises parity between the parties in any transaction and values the consumer as well as the producer, the receiver as well as the giver. It recognises the need for participation; not for the passive consumer. Co-Production values both the giver and receiver; it values people and their contribution to society and it bridges class and racial divides. It's about getting people to take responsibility and get involved. It's about building self-esteem. Cahn likens the non-market economy to a computer operating system describing present attempts to 'fix' it with 'programs' from the market economy and demonstrates how this is so clearly failing. He examines the strengths and weaknesses of both the market and the non-market economies. Conventional money has a number of downsides for society as a whole, each of which Time Dollars is able to counter. Money rewards our competitive, acquisitive side; Time Dollars rewards our co-operative, altruistic side. Co-Production is about valuing people as they are not how the market economy would like them to be. Cahn argues for a redefinition of work to include non-market activities such as child rearing, community building, care for the elderly.This book is a must for anyone who is serious about exploring practical, workable alternatives to the market economy. It is a clever combination of economic and political theory and practical examples of how Time Dollars is working to improve the lot of many thousand of people - the elderly, school children, immigrants that the system has previously treated as "throw-away" people. A political lecture? Perhaps. A crusade? Yes, probably. A must for anyone concerned with social justice? Certainly!
Trustpilot
Copyright © 2022 Thriftbooks.com Terms of Use | Privacy Policy | Do Not Sell My Personal Information | Cookie Preferences | Accessibility Statement
ThriftBooks® and the ThriftBooks® logo are registered trademarks of Thrift Books Global, LLC