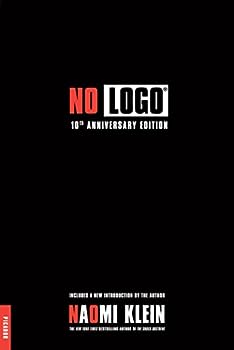 No Logo: 10th Anniversary Edition with a New Introduction by the Author

This description may be from another edition of this product. NO LOGO was an international bestseller and "a movement bible" ( The New York Times ). Naomi Klein's second book, The Shock Doctrine , was hailed as a "master narrative of our time," and has over a...

Modern Manifesto in Defense of Citizen Public Against Corporate Fascism

Published by Thriftbooks.com User , 15 years ago
EDITED 22 Oct 07 to add some links. Preliminary note: there are some really excellent reviews of this book that I admire and recommend be read as a whole. Although I have reviewed a number of books on the evil of corporate rule disconnected from social responsibility such as democratic governance normally imposes, books such as Lionel Tiger, "The Manufacture of Evil," and more recently, John Perkins, "Confessions of an Economic Hit Man" and William Greider, "The Soul of Capitalism," this is the first book in my experience to actually focus on the pervasive process of branding and the spread of corporate control (into schoolrooms and chambers of governance), and also focus, with great originality, on the emergence of an active citizen-based opposition to corporate dominance. In terms of lasting effect, the most important value of this book to me has been the identification of the World Social Forum as a "must attend" event. I plan to do so. The bottom line in this book, at least to me, is that government has failed to represent the public and sold out to special interests. The author notes how the US helped derail a United Nations effort to establish, in 1986, a transnational oversight body to help avoid the "race to the bottom" and develop standards of equal opportunity and human rights for labor. Other books, such as "The Global Class War" have focused on the emergence of a global elite that works together to exploit the public and the workers, and that is a part of this story. The author is very forceful in singling out Microsoft as an exploiter of temporary labor, and goes on from there to highlight both the sweatshops overseas and the "temp" gulags here in the USA, not least of which is Wal-Mart, where other books give us great detail. I learn for the first time about "culture jamming" and the rise in activists who seek to out corporations, I am reinforced in my view that corporate facism is rampant in America, and I am much taken with the quote on page 325, from Utah Philips, to the effect that those killing the earth have names and addresses. I am inspired by the author's discussion of "selective purchasing" as the ultimate means of bringing corporations to heel. WIRED Magazine has explored how bar codes can be used to connect potential buyers to all relevant information. Whereas before I have advocated information about water and oil content, now, instructed by this author, I believe it should be possible to also acquire information about labor content (hourly wages, benefits or not, cost paid to labor for the item) and source of capital. Over-all the book discusses the broken relationship in the triad between the people, the government responsible for representing them, and the corporations that exploit them as consumers and employees and stockholders. I put this book down reflecting on how much power individuals actually have, and how little they know about how to use it. See also: The Shock Doctrine: The Rise of Disaster

I may disagree, but this is a fun and valuable book

Published by Thriftbooks.com User , 20 years ago
WHile I worried that this was a simple ideological diatribe, I was very happily surprized at the intelligence and substance of Klein's book. It is a tough, well-reasoned manifesto for the anti-consumerism left of "Gen X." If you are wondering what was driving many of those protesters at the WTO and other summit meetings - most notoriously Seattle in late 1999 - then this book is the best place I know. It is part cultural critique, part economics and social policy, and partly a call to arms. Reading it has helped me to make sense of so much that I thought was simple, nihilistic anarchism. I was humbled to learn that there is far far more behind the movement than I had granted it.In a nutshell, Klein argues that the "superbrands" - the huge corporations such as Disney and Nike - are progressively taking over virtually all "public spaces," including school curricula, neighborhoods, and all-encompassing infotainment malls like Virgin Megastores. THey are doing this in an attempt enter our minds as consumers in the most intimate ways, which Klein and others find unbearably intrusive. Moreover, she argues, as they subcontract overseas, the superbrands are leaving first-world workers behind while they exploit those in the developing world under horible conditions. It all adds up, she asserts, into a kind of emerging global worker solidarity that is developing new means (via internet exposes, protest campaigns, etc.) to push the superbrands to adopt more just policies and practices. What was so amazing and useful for me, as a business writer looking at the same issues, is that Klein so often hones in on the underside of what I think are good and effective business practices: the development of brand values, globalisation of the production/value chain to lower prices, and the like. Often I may disagree with her take on things, but she makes too many insightful points to dismiss her and those whom she speaks for. I came to genuinely respect her as a thinker and writer.Nonetheless, there were numerous omissions, some of which I must point out. First, while condemning exploitive labor practices in third-world sweat shops (which I do not deny exist), Klein fails to explore what the available alternatives are for these workers. Well, I went to Pakistan to examine one of the cases she addresses - children soccerball sewers - and I can say that their alternatives were all too often brick kilns or leather tanneries, both of which were far more dangerous and beyond the reach of international activists because the superbrands have nothing to do with them. Second, Klein tended to dismiss the efforts of MNCs out of hand, as weak sops designed more for PR purposes than to effect change. This is true for some groups, but again, while in Vietnam, I witnessed what I regarded as real social progress that came from the actions of a superbrand: upon hearing the demands and suggestions of a worker-safety inspector paid by adidas, Taiwanese sewing-machine

Read the tale of three logos

Published by Thriftbooks.com User , 21 years ago
The chapter that describes protest actions against McDonalds, Nike and Shell will leave you absolutedly outraged at the arrogance of multi-national corporations. Klein shows the disassociation between brands and manufacture of products has lead to hideous abuses of the environment, workers and freedom of speech, including outright corporate-sponsored murder to silence critics. After reading this book you will feel ashamed to wear clothing that displays brand names, ashamed to shop at branded stores and ashamed to eat at branded restaurants. You will understand why modern anarchists are attacking seeminly harmless franchise outlets. Klein shows that the price you are really paying for cheaper prices and convenience is your rights as a citizen in a democracy.
Copyright © 2020 Thriftbooks.com Terms of Use | Privacy Policy | Do Not Sell My Personal Information | Accessibility Statement
ThriftBooks® and the ThriftBooks® logo are registered trademarks of Thrift Books Global, LLC