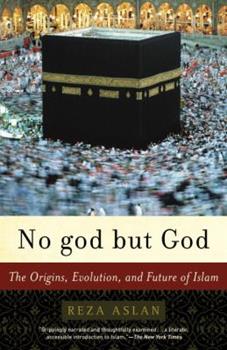 No God But God: The Origins, Evolution, and Future of Islam

A fascinating, accessible introduction to Islam from the author of the #1 New York Times bestseller Zealot Though it is the fastest-growing religion in the world, Islam remains shrouded in ignorance and fear for much of the West. In No god but God, Reza Aslan, an internationally acclaimed scholar of religions, explains this faith in all its beauty and complexity. Beginning with a vivid account of the social and religious milieu in which the Prophet...

Published by Thriftbooks.com User , 15 years ago
As a muslim woman who had been conflicted between my personal beliefs and the current interpretation of Islam, this book was a breath of fresh air. It reaffirmed how Islam is a religion of compassion, respect & tolerance and how the original vision of Islam was the creation of a true civil society. The message of this book is much needed. For what this book gave me personally, I cannot thank Reza Aslan enough.

Published by Thriftbooks.com User , 17 years ago
Islam is one of the natural extensions for someone who studies Middle Eastern politics. I've read primarily about Iraq and other countries, but it's all been a very generalized look at the Middle East. To really gain an understanding of the region, one must read specifically about Islam, ethnic conflict, and democratization, as well as books about the region in general. Having never read anything about Islam, I was very intimidated to pick up a book and start reading about such a complicated and rich religion. Take into account that I'm an atheist and then the topic seems very daunting indeed. Even though I was right to assume that the subject is complex, this book was more helpful than I could have imagined. Aslan's style is straightforward and easy to read. He breaks the book down into very well-organized chapters that flow together nicely. In addition to my positive experience with the book, I also had the opportunity to show No god but God to several Muslim friends from several different Middle Eastern countries here at school and they all gave their thumbs up. I knew very little about Islam before purchasing this book but did not get lost or feel confused at any point when reading it. I know that I will have to read many more books about Islam before I really start to understand it, but I think this book was the perfect starting point. For anyone else in my position, I highly recommend it.

Published by Thriftbooks.com User , 17 years ago
The first thing that struck me about this book is how well-written it is. I am a writer with about 5,000 articles in print or online. I'm also an editor, and I am noted for my harsh evaluations of the writing of others--most people simply do not write well. Reza Aslan writes well. Extremely well. By the time I was into the second page of this book, I felt that if Aslan had written a book about navel lint--I would still want to read it. Couple the excellent writing with quality content, and you have a captivating book. When the subject is an authoritative explanation of Islam, the book becomes a must read for two groups of people: Those who are Muslims, and those who are not. Aslan takes us on a journey through time. We see Muhammad before he becomes the "messenger of God," and we see his struggles along the way. From this, you can understand how Islam got its start. And then we see the various forces that act upon Islam as a blacksmith's hammer acts upon hot metal, and we watch this religion take shape over centuries. Today, Islam is the fastest-growing religion in the world. But, it's also a sharply fragmented religion. Aslan explain the origins of the various factions shaping Islam today. There's a strong parallel to what happened in Christianity. And, Aslan draws on this parallel to explain a core concept of the book--that Islam is far from monolithic. You have to remember that Christianity got a 500 year head start on Islam. Read your history of the West, and you can see Islam along the same trajectory. Americans, in the aftershock of September 11, generally felt much of the Islamic world had declared war on the West. In actuality, the war is between Islamic factions--just as there were wars between Christian factions five hundred years ago (and still are, today). The West is, to many of the warring factions, a symbol of power. An attack on the West is a way to demonstrate power to the other factions. Of course, there's also a hatred of the West--but that hatred isn't the core driver it's made out to be. Yet, that hatred is a powerful force in itself. Contrary to what many liberals have been spewing, this hatred did not arise from recent actions of any American political leader. Aslan destroys that bit of proganda by addressing the history of colonization--the enslavement, displacement, and impoverishment of millions of Islamic people. What about this interfaction rivalry? Islam is beset by three major philosophies. One philosophy seeks to keep the original vision of Islam pure--that is, to not deviate from the teachings of Muhammad. A second philosophy is that Muhammad was not pure enough, and so Islam must become more radical (think of the Taliban, here). The third philosophy is that Islam must change to adapt to the modern world--it must throw off the chains of ignorance and poverty. Aslan explains the thinking behind each of these philosophies, without preaching to the reader. Aslan's views come into play at the end of the book,

Published by Thriftbooks.com User , 17 years ago
A truly fascinating and accessible book written by Reza Islan, a scholar of comparative religions. It documents Islam's evolution since the time of Prophet Muhammad till our present day in a highly engaging fashion. In a succinct account, the book documents the history of this greatly misunderstood religion, starting from the Prophet's life, the civil war that englufed Muslims after his death, and Quran'ic interpretations that medieval islamic scholars advanced due to political reasons rather than theological conviction. The position of women in Islam is further clarified, with the author contrasting the Prophet's great appreciation of women's role in society to their later degradation as a result of men's monopoly over the interpretation of the Quran. The roots of modern terrorism are exposed from their origins in 18th century Wahhabist thought which relied on ultra-conservative interpretations and un-substantiated sayings from the Prophet, to the current scene after 9/11. This insightful book also deals with the roots of anti-semitism in Islam, the Islamic rulings on the treatment of minorities and prisoners of wars, and Islamic theology and law. A truly engaging account of Islam that is a must-read for anyone who is interested in learning more about current events and/or the history of religions.
Trustpilot
Copyright © 2022 Thriftbooks.com Terms of Use | Privacy Policy | Do Not Sell or Share My Personal Information | Accessibility Statement
ThriftBooks® and the ThriftBooks® logo are registered trademarks of Thrift Books Global, LLC