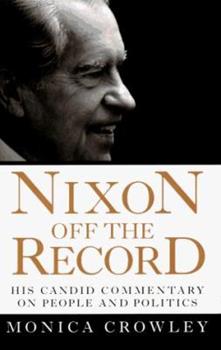 Nixon Off the Record: His Candid Commentary on People and Politics

Nixon and I met for the first time on October 2, 1989, and he was exceedingly generous with the commodity that was the most precious to him: time.... And, surprisingly for a man who had been so often damaged by those he trusted, Nixon trusted me immediately. I became a member of his small circle of advisers. I listened as he confided his views on international affairs and world leaders, American politics and policy, Watergate, and his own personal...

Should Have Been On The Couch

Published by Thriftbooks.com User , 18 years ago
If you ever wondered what an ex President might talk about with his friends then you need to buy this book, a real fly on the wall type book. I have to admit up front that I really liked this book. It was not that I have a deep interest in Nixon or that Nixon spelled out some overly insightful view of the political landscape. It was just that this author did such a good job of detailing out (quoting) so many of Nixon's musings about the political landscape from 90 to 94. I was most surprised at how petty he came off. He was whining and complaining about the press in about every three sentences. Regardless of the situation, he somehow related it back to how the press and Democrats unfairly went after him during the Watergate scandal. At this point in his life he must have focused on it so much that he saw the whole world through this hate filled prism. I guess it was not such a surprise about Nixon disliking the press, but what did surprise me is that it seamed that he disliked any President that came after him. In his mind, they all fell short of his accomplishments and were far from a close second. He of course would then work in a diatribe about the press and how they will never give him the credit he deserves. It was interesting that he had such a low opinion of Bush Sr., he went after Bush on the poor reelection campaign, which was fair enough, but he also let him have it about every aspect of his Presidency. Yet his opinion would change the minute anyone in the Bush administration called him. Once he was shown some attention his opinion would suddenly change and all was right again with Bush, at least for a few weeks. I was surprised by this very apparent selfish and almost immature behavior.I was again surprised by his roller coaster ride with President Clinton, during the campaign he down right hated the man. Once Clinton became the President and started calling Nixon, he is thought of by Nixon as FDR reincarnated. Well it was very predictable that when Clinton started to distance himself from Nixon that the ugly side of tricky Dick came back into the picture. Overall Nixon came off as a man with a very bruised ego and a bit bitter. I thought he some good views on the political situation of the time, but it was basically common sense. I kept thinking that if you follow politics you would have many of the same observations. I guess I just thought given his long career that he would somehow have insight that really would have surprised me. Overall the book was very interesting and a fast read. I had trouble putting it down. If you are interested in American politics then this a great book.

Perhaps the most accurate view of Nixon as a personality

Published by Thriftbooks.com User , 18 years ago
Monica Crowley focuses on the three qualities Nixon has said each political personality absolutely requires for survival and thriving: head; heart; and guts. Crowley's readable work exemplifies the political mind that Nixon used to gain election as a U.S. Senator, the political savvy that kept him on the Republican ticket in 1952, and the mastery that saw his elections change for the better from 1960 to 1968. Crowley doesn't shape anything that Nixon says, other than to put it into proper context, because she knows Nixon's words and ideas speak for themselves. He doesn't need a mouthpiece and not every thing he says is controversial or outlandish and deserving of reprisal from political foes, as any careful reader of Nixon's own books will come to understand. This work further exonerates Nixon from the political graveyard much more so that his own books following his resignation. Crowley's articulate, readable format is sure to rekindle reader's interest in Nixon as a person and as a personality.

Published by Thriftbooks.com User , 22 years ago
As Joe Eszterhas notes in "American Rhapsody", Bill Clinton was not the only President with his own personal Monica. Clearly some differences between the two politicians lay in the nature and quality of their relationships with their very junior employees.Nixon's Monica was a promising young student of political science whose initial letters of admiration to the Old Man in California prompted a job offer, which had Monica functioning in what appears to be a variety of roles: research assistant, personal assistant, professional best friend, occassional therapist, and, apparently surreptitiously, scribe. Watergate at least taught Nixon the dangers of indiscrimately taping conversations. Instead of speaking for the benefit of a series of bugs planted in the Oval Office, generating a real- time archive of his Presidency, he speaks now in quasi-retirement to his young assistant apparently hoping that she would indeed record (and possibly redact, for all the reader will know) his current thoughts on American politics for history. Certainly his former "expletives deleted" are nowhere in evidence, and his speech is lucid and well-argued. Monica apparently took written notes in the evenings, and the whole exercise came about without benefit of a recording device.What is startling to observe is that Nixon's political instincts and instant readings of personalities apparently sharpened considerably in his post-White House years. The former President who rails to Monica alternately about Bill (and Hillary) Clinton and George Bush, while minutely observing the election of 1992, is as sharp as a tack. So are in his daily readings of campaign trail news and in his (perhaps paranoia-inspired) minute interpretations of discussions with the politicians who came calling for advice. Nixon as political strategist had much to offer right to very end, and his exile as armchair quarterback in San Clemente must have been a sort of purgatory for such an experienced and decisive politician.The Nixon whom Crowley describes is startlingly endearing in his insecurities: perhaps because their implications are neutralized by his enforced retirement. He pretends on occassion to disdain television, claiming to get his detailed information from "Mrs. Nixon". Upon Clinton's election, Nixon waits by the phone for calls for advice with the same petulant, obsessive nervousness of a teenager. When the calls finally begin, Nixon is clearly touched by the respectful tenor of Clinton's approaches. Just as it took Nixon to open China, perhaps it took Clinton, a centrist Democrat, to open Nixon. Nixon is old-fashioned, gracious, entirely proper and even humble in his dealings with this young woman. Nixon apparently never explicitly asked her to provide him with this voice from beyond the grave. His kindness and eagerly professorial demeanour with Crowley, however, clearly aroused a real loyalty in her, and her treatment of her elderly employer and his frequent telephone calls

Published by Thriftbooks.com User , 22 years ago
"Nixon off the Record" displays a President whose accomplishments are usually underrated by historians who say that he is the epitome of Machiavellian evil. This book shows the reader what a shrewd politician Nixon was. His foreign policy expertise was unbeatatble. Unfortunately, he was haunted by personal demons which ultimately set him up for his demise. "Nixon Off the Record" displays the truly human side of Nixon which most people did not really see. Crowley truly brought out the real Nixon through his observation of contemporary politics and figures who rose to the national scene prior to his death.

Remarkable ! Nixon's ideas never been so much insightful !

Published by Thriftbooks.com User , 24 years ago
Former President Richard Nixon is trully "largen and bigger than life", using his own words about Teddy Roosevelt and other leaders from the past. I've read a lot about Mr. Nixon, and saw more than a dozen times Oliver Stone's movie starring a triumphant Anthony Hopkins in the main role. Nixon's persona and mostly his ideas fascinates and intrigues me like no one else. Controversial, sometimes bitter, tough when he had to be, Nixon is a legend and a political genius of the century. No doubt Monica Crowley's book has its definitive place in my private library. It showed the Nixon most of us worship. I keep imagining the pressure that Mr. Nixon had to face during the Watergate (which forced him to resign) and I still can't believe he took part in that mess as much as some people say (inside and outside the Press arena). Let's focus on the guy's internacional achievments as President, for God's sake ! Anyway, one thing is for sure: the United States' "top of the top" office requires men with the wisdom, the vision and the guts of Richard M. Nixon. He did all his way. For me, that's what really counts.
Trustpilot
Copyright © 2022 Thriftbooks.com Terms of Use | Privacy Policy | Do Not Sell My Personal Information | Cookie Preferences | Accessibility Statement
ThriftBooks® and the ThriftBooks® logo are registered trademarks of Thrift Books Global, LLC