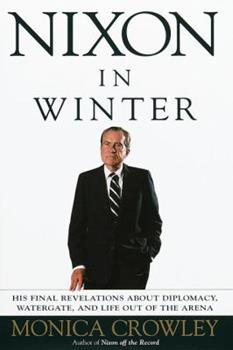 During the last four years??of Richard Nixon's life, Monica Crowley served as his foreign-policy assistant and political confidante--a trusted member of the small circle of advisors with whom he shared hours of daily one-on-one conversations. This is the remarkable story of the final public and private years of the thirty-seventh president, based on full reconstructions of the conversations Crowley had with him at the time.?? Nixon in Winter puts...

Published by Thriftbooks.com User , 18 years ago
If one ever wonders what qualifies Monica Crowley to be a talk show host, if one ever questions what relevance her opinions or insight have for the rest of America, if one ever doubts that Monica Crowley is a qualified author, this work will provide a resounding affirmation of her talent, intelligence, and ability. Before WABC and before a Columbia Ph.D., there was only the college of Richard Nixon. Crowley traveled the globe with Nixon, soaking in every detail, every nuance of his intellect and capacity for foreign affairs and political strategy. Concerning posterity, Nixon always knew when he spoke to or with Crowley that he was speaking to history. Nixon has already sought to rewrite his legacy in his memoirs RN as well as In the Arena. Nixon's qualifications are manifest in his own writings as well. Crowley does an excellent job of highlighting Nixon's capacity for political intelligence and machinations while simultaneously showing readers that Nixon is more than a one-dimensional paranoid recluse. Crowley feels obliged to mention Watergate because it figures into Nixon's legacy so prominently but she does not dwell on a low point in an otherwise important career. She also does an excellent job of showing that there are two sides to Nixon: the steely statesman who opened China, diffused tensions with the Soviet Union, and worked toward peace in the middle east (all coauthored with Henry Kissinger) as well as the man behind the myth, saddened by the death of his wife, concerned about the health of his new foreign policy assistant, and full of colorful tales about fellow political personalities from his time in office. It is at this point and at this separation where Nixon comes off as the "grandfather" type that Eisenhower seemed to personify to the average American forty years earlier.

Published by Thriftbooks.com User , 22 years ago
Monica Crowley has written a gem of a book detailing aspects of the last four years of Richard Nixon's life. Born in 1968, the year of RN's first presidential victory, the young author served as foreign policy assistant to the 37th president during those last years,1990-4. What strikes the reader is the fact that Nixon was always the man in the arena. Although he resigned the presidency in 1974 RN continued to be a significant influence in foreign policy due to the sagacious advice he gave to his successors, both in public speeches, articles and books as well as in private briefings and memorandums.To use a showjumping analogy, he may no longer have been the man in the saddle, after 1974, but he was still in the arena constructing the course and putting a few others over the jumps! This is also a book about books. Nixon was a prolific author and Crowley worked on his last two books, 'Seize the Moment' and 'Beyond Peace,'. The author outlines the energy and passion of RN in his preparation of these publications.. Crowley divides her book into neat compartments. Thus, under the heading Nixon and the World, there are chapters on the end of the Cold War, China, the Gulf War and the legacy of Vietnam.There is also interesting chapters under Scandal and Reflections. The Nixon- haters will hate this book because it does not portray RN as the Devil, a fascist, evil or any other of the highly biased descriptions that this highly intelligent man and political strategist had to constantly endure throughout his political life. However, neither has Crowley simply written a puff-job on her former boss. She shows Nixon railing against his old enemies-Democrats, liberals, the media and even his own Republican side but there is also humour in RN's outbursts that frequently had me chuckling.Indeed, even though I work in the Australian media, it is hard not to sympathise with some of Nixon's allegations of continual media bias that he considered dated back to the Hiss affair. Above all Crowley has produced a lively read of America's GOP, (grand old pol), in the winter of his life, that allows the reader to make their own decisions on this complex political figure-surely a refreshing change from the ravings of some writers who attempt to reduce Nixon to the same level as themselves. In doing so, and in using an insider's knowledge of the man, Ms Crowley has provided much winter warmth.

Displayed the vulnerable side of an aging Nixon.

Published by Thriftbooks.com User , 23 years ago
I'll admit I'm not a huge fan of Richard Nixon. I was 8 years old when Watergate happened, so he really isn't of my generation - but I thought I would read this book to learn more about Mr. Nixon in his post-Watergate life.I found the book compelling and informative. I especially liked the personal reflections of Mr. Nixon, and was sitting on the edge of my chair when he seemed almost ready to reveal "Deep Throat."I think Ms. Crowley displayed a sensitive, remorseful man in his waning years, desperately hoping to force historians to reassess his legacy. After reading this book, I hope they do.

Published by Thriftbooks.com User , 23 years ago
I must first admit that I am a great admirer of President Nixon. It is a delight to read his candid thoughts from informal settings. I literally laughed out loud more than once. This books displays President Nixon's wonderful insights in ways that even he couldn't express through his own works. Being able to read his true inner thoughts in private settings without the sugar-coating that is necessary when speaking or writing for the public was a pure delight, not to mention educational. From the triumphs and failures of his presidency to current political scandal and policy to personal beliefs on life itself this book delivers President Nixon perhaps at his best. I found myself nodding in agreement time after time, whether it was in reading his refelective analysis of the Vienam War or his take on the Thomas Confirmation Hearings (by the way what the heck has happened to Arlen Specter since then. I have to believe that President Nixon would be as disappointed in him as I have been over the past year or so). Even the most adamant Nixon-hater would have a hard time putting this book down, for it does give everyone a look at the inner-man. And, I for one do not see how any unbiased reader could conclude upon reading this book that Nixon is the man that the press and others have attempted to make him out to be. Frustrated by the ignorance of the general public regarding the misconceptions about President Nixon this book has refreshed my memory with ample ammo to combat such misguided beliefs. The genuineness is fascinating, the opinions are entertaining and discerning. I couldn't put it down. 5 stars.

Get to know the Nixon we never knew!

Published by Thriftbooks.com User , 24 years ago
-Nixon In Winter- is a very human portrait of one of the most significant and controversial figures and minds of the twentieth century. Monica Crowley has performed a great service to the memory of Richard Nixon with her previous book -Nixon off the Record- and her current work. Too often, we allow a single event fix itself in our minds and bar a fuller understanding of who someone was and what they wanted. For Nixon, the event was Watergate. Nixon made his mistakes -- big ones -- and had his faults -- but the qualities that carried him to the presidency -- a keen mind and principled determination never faded. Crowley's book is not a justification of Nixon's sins. Instead, it illuminates how a president, even a fallen president, can continue to exert his influence on the national and international scene from the shadows, and at times on the main stage. It also shares the personal beliefs and feelings of an elder statesman on a wide range of topics - foreign policy, scandals (both Nixon's and others), philosophy, religion, human nature, family, and age, mortality, and purpose. This is accomplished by book showing the former president through the eyes of a young woman who worked with him for four years as his foreign policy assistant. It reveals Nixon during highs and lows, in private and public moments, in joy and in outrage as he struggled to remain a factor in the life of America, and perhaps, redeem himself. Nixon, playing on MacArthur's famous line stated, "Old politicians sometimes die, but they never fade away." This quote from the book essentially sums up the motto Nixon tried to live up to in the winter of his life, and Crowley's book illustrates this perfectly.
Trustpilot
Copyright © 2022 Thriftbooks.com Terms of Use | Privacy Policy | Do Not Sell My Personal Information | Cookie Preferences | Accessibility Statement
ThriftBooks® and the ThriftBooks® logo are registered trademarks of Thrift Books Global, LLC