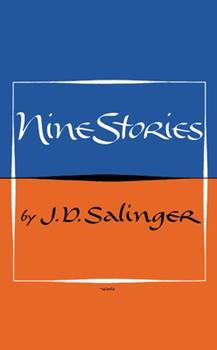 The "original, first-rate, serious, and beautiful" short fiction ( New York Times Book Review ) that introduced J. D. Salinger to American readers in the years after World War II, including "A Perfect Day for Bananafish" and the first appearance of Salinger's fictional Glass family. Nine exceptional stories from one of the great literary voices of the twentieth century. Witty, urbane, and frequently affecting, Nine Stories sits alongside Salinger's...

Published by walriti , 2 years ago
These are some of the best short stories anyone can read! Worth every penny.

Short Stories That are Perfect for Leisurely Reading

Published by Thriftbooks.com User , 3 years ago
These short stories all have the honest and vulnerable, yet guarded tone that I was drawn to in The Catcher in the rye. They could even satisfy those who did not enjoy that novel, as they have genuinely intriguing plots. Of course, I think that one may have to have a certain amount of sensitivity to enjoy these stories, because of the existential themes that account for most of the story's meanings, if there are meanings to be found at all. If for nothing else, I would suggest these stories due to them being well written; you will not find any typos or frustrating plot holes. This book is perfect if one is looking to pass the time with some legitimately good short reads without feeling the weight of committing to an entire novel.

Published by Thriftbooks.com User , 15 years ago
As far as I can tell (based on a quick google search), this book has exactly the same contents as "Nine Stories." I highly recommend "Nine Stories," but I'm not sure why the publisher felt the need to re-release it under a different title. I would give it 5 stars, but it loses one for potentially misleading customers. Perhaps they wanted to capitalize on the buzz surrounding the band We Are Scientists, who released an album called "With Love and Squalor"?

'For Esme with Love and Squalor'

Published by Thriftbooks.com User , 16 years ago
For 'Esme with Love and Squalor' is one of Salinger's best stories. It also appears in his first collection of stories called 'Nine Stories.' It tells the story of an American G.I. who for one part of the story is in Devon England where he is in training. On one lonely day off he goes into a tea-room and meets an English child and her small brother. Her name is 'Esme' and she is a precocious beautiful and sensitive child with whom the G.I. has a friendly, and somewhat from his point- of- view ironic conversation. The language is pure Salingerese. The little brother acts up and is chided by his sister. He recites a riddle , : What did one wall say to another" and hilariously gives the answer "Meet you at the corner" When the soldier returns the answer at his asking another time he gets upset. But at parting the soldier asks him the question and the little boy gets his spirit back by again giving the answer. More important the soldier and the little girl in some way assauge each other's loneliness. She is lonely for her father who has been lost in the war. He is lonely, lonely. The scene then changes to an Army headquarters in the heart of the European theatre. The same soldier is on the verge of breakdown when he receives a letter from Esme , which somehow brings him back to a sense that there is something beautiful, whole , humane in the world, something worth living for. The story of course must be read to be felt truly. My summary is poor. It is such a beautiful story. I truly suggest you read it. "It will make you laugh. It will make you cry. And you will never forget it."

Published by Thriftbooks.com User , 17 years ago
Because this collection of short stories features children in most of them, some dismiss it as kiddie lit in the same vein as Salinger's "Catcher In The Rye," a great novel but read more in high school than anywhere else. Many see it as the beginning of Salinger's ascent to his mountain of impenetrability and Glass-centric navel gazing. Both grasp parts of the elephant, but miss a larger fact. "Nine Stories" is, story-for-story, one of the most beguiling marriages of disciplined fiction-writing and metaphysical inquiry. "The most singular difference between happiness and joy is that happiness is a solid and joy a liquid," notes the narrator of the most liquid story in this collection, "De Daumier-Smith's Blue Period." It seems to me that line is a key for understanding Salinger's unique approach, as well as why so many people are put off by him. Salinger's fiction doesn't read like anyone else's, especially when you move beyond "Catcher." "Nine Stories" is the most mainstream, and also most engaging and best-written, example of his Zen approach to fiction, both in substance and form. He was more interested in communicating feelings and inner perceptions than plots or even ideas, and this liquidity feels somehow wrong in the light of stories we usually read. But these stories actually work quite well, not just in isolation but in tandem. The first and the last story, "A Perfect Day For Bananafish" and "Teddy," play off each other, a senseless death in one story being explained by the patient, precocious narrator in the other. What are represented in one story as "bananafish" and the other as "apple-eaters" are the grasping throngs of people, bad and good, who reach out for material delights and miss out on the greater, encompassing music of life, and the bookend tales take stock, in a wry yet deeply beguiling way, of those who hear that music and are isolated for it. Witty yet sincere, funny but tragic, each of the stories hits you differently. Not all are bullseyes. "Down At The Dinghy" and "Just Before The War With The Eskimos" leave me a bit flat and suffer most from Salinger's disinterest in plot. But "For Esme - With Love And Squalor" truly deserves its reputation as one of the most searing and uplifting stories in American fiction, while "The Laughing Man" is my personal favorite as it details a doomed romance from the perspective of a child onlooker, with the ingenious device of a rambling campfire tale that sets you up for the big fall. Salinger wrote fiction like no one else, as cosmic riddles (or "koans" as Zen Buddhists would call them) meant to engage one spiritually rather than intellectually. The literati may dismiss him, but he wasn't writing for them but instead for the lost people of his world, the girl with the big nose who stays in her room when guests arrive or the quiet guy who lives with his mom, telling them that they are loved and in a better place than they know. It's true Salinger took this approach, in later works,

Looks deeply at our society

Published by Thriftbooks.com User , 21 years ago
In Nine Stories, J.D. Salinger seems bent on exposing the poignant complexities of the people around us. The characters of these timeless narratives are typical American men and women, nestled away in suburbs; unwinding on summer retreats and buried in apartment complexes; folks who, on the surface, seem fortunate and content. Mr. Salinger peels past their public appearances, throwing them conundrums bound to expose their hidden insecurities, shortcomings and naivety. A visit from a college roommate causes an upheaval of reflection and regret in a suburban housewife in "Uncle Wiggly in Connecticut;" romantic turmoil unearths a mean streak in the chief of a boy scout-type organization in "the Laughing Man" and Seymour Glass, the burnt-out intellectual whose presence would loom over Salinger's latter work, falls over the edge in the intense, unpredictable, unforgettable classic, "A Perfect Day for Bananafish." Fifty years after they were conceived these characters could still be your neighbors or schoolmates. The vivid portraits of Nine Stories are practical assessments for the modern American dream.

Nine Stories Mentions in Our Blog 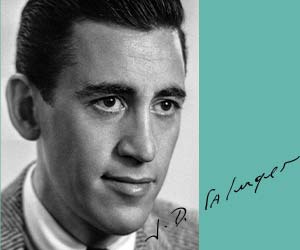 It was 74 years ago on January 31, when J. D. Salinger’s short story A Perfect Day for Bananafish appeared in The New Yorker. The story introduces Seymour Glass, a recurring character in many of Salinger’s subsequent stories along with his large quirky family. Here we share more about the author and his favorite subjects.