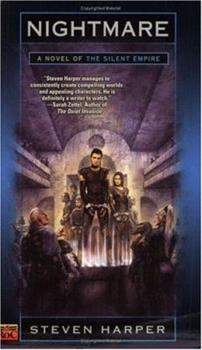 Nightmare:: A Book of the Silent Empire

(Book #2 in the The Silent Empire Series)

Before Kendi learned to use his talent of navigating the plane of mental existence known as the Dream, he had to escape his physical existence as a slave.

Amazing Sci-Fi with a wow and shock factor!!

Published by Thriftbooks.com User , 17 years ago
I was truely blown away when I read this book!! This is the first book I read by Steven Harper and I was meserized. The whole concept of Silent in itself is mindblowing and it is very original. The main character Kendi is put through some emotional challenges where you total feel for him. The way the author portrayed Kendi makes you actually care for the character. The book starts out where Kendi and his family are broken up and sold into slavery. He and his mother being bought by the same owner did bring some comfort that he still has a family member with him but, it was short lived. As soon as he & his mother were discovered that they were Silent, boy, did things had changed. From this point on you're hooked. I coulnd't wait to see what happened next. There was a turn of events when Kendi was a witness to a murder in the dream & discovered that there was a serial killer on the loose. Now he was on the killer's hit list when the killings were primarilary women. The ending was a shocker!! I didn't expect the ending to end the way it did. As soon as I was done reading, I wiped the sweat from my forehead and said, "Whoa, this is a great book!!"

Published by Thriftbooks.com User , 18 years ago
Nightmare is a great scifi read! Steven Harper adeptly weaves the vivid characters into the story, creating an utterly believable world that you won't want to leave. It's amazing how Harper so realistically recreates the see-sawing emotions of a teenager's first stirrings of desire - the elation of falling for someone and abject feelings of rejection when it turns out that person doesn't feel the same way.

Published by Thriftbooks.com User , 19 years ago
It is rare that the second book in the series is an improvement rather than a disappointment. Far too often I have read the second book in a series or trilogy and been let down either by a dragging or faltering storyline or worse the failure of the author to expand on his/her original premise. Not so with Steven Harper's "Nightmare" his second book in his "Silent Empire" series. "Nightmare is not a sequel but rather a prequel. It is the story of the main character of "Dreamer, Kendi Weaver as a slave and then as a student.Twelve year old Kendi expects to awaken from cryogenic sleep on a colony world where he and his family anticipate recreating Australian aboriginal society. However 900 years have passed while the colonists slept and they awoke to find themselves being sold into slavery. Sold as a laborer Kendi spends several years on a frog farm when a chance meeting reveals him to be one of the Silent. The Silent are telepaths with the ability to communicate with other telepaths across the galaxy. The Silent do this by entering the Dream, a world entirely composed of the collective unconscious and practically anything is possible. Being Silent means Kendhi is now extraordinarily valuable and his owner announces she will see Kendhi immediately. Facing yet another slave auction Kendi is rescued and freed by Mother Ara of the Children of Irfan, a monastic order, dedicated to teaching the Silent to use their abilities. Kendi is transported to the Planet Bellerophon, home of the Children of Irfan. Kendhi begins his training in the use of his abilities with the Children of Irfan as a free person. However, he is haunted by the memories of his parents and siblings who are still slaves somewhere. His guilt at being free leads him to act out in the worst of teenage ways. Worse, there is a vicious serial killer stalking the Dream using individual's dreamscapes as weapons and Kendi's savior and teacher, Mother Ara, appears to be next on the murder's menu. Mixed in with all this is Kendi's ongoing struggle with his emerging homosexuality.Mr. Harper creates vivid, fully formed characters that attach themselves to your memory and stay. I remember teenage angst and I believe that few authors can vividly recreate that worst of life phases. Mr. Harper expresses that age life few others I have read. Background exposition is fed into the storyline without interrupting the story. Mr. Harper also pulls off quite a feat in surprising readers with the true identity of the murder. Mr. Harper has left a gap in time between the end of "Nightmare" and the beginning f his first book in the series, "Dreamer" leaving time for (hopefully)another story of Kendhi's youth.

Published by Thriftbooks.com User , 19 years ago
When the human colonists landed on Bellerophon, they knew that they were not the first intelligent species to inhabit the land. The Ched-Balaar realized that with guidance humans could enter The Dream State, a mental plane of existence where humans and aliens are able to meet and communicate no matter the distance between the Dreamer's planets. The Silents, those who enter the Dream State, are much valued because communication is instantaneous and business can be conducted just as messages can be delivered in the blink of an eye even though the participants are light years apart.After three years in slavery, Kendi is bought by the Children of Irfan and given his freedom and a ticket to any place in the known universe. He elects to stay on Bellerophon, get a good education, and learn how to enter the Dream so he can find his missing siblings and parents. The Dream is not safe yet because a powerful Silent is murdering dreamers and nobody has a clue to the identity of the serial killer.Steven Harper creates a realistic future based on meditation philosophies in vogue today. Many readers will wish they had a time machine so they could travel into the future and learn how to be part of the Dream. Kendi, for all the suffering he has endured, is a strong willed person who bends but never breaks. His ability to overcome the traumas he has endeared makes him a hero worth rooting for by the enthralled audience.Harriet Klausner

Published by Thriftbooks.com User , 19 years ago
Ever since reading Steven Harper's first Silent Empire novel last year, I have been looking forward to this prequel. This book doesn't disappoint. The always engaging Mr. Harper has written a book which combines elements of Bildungsroman with the intrigue of a serial killer investigation. His skill at plot, pacing, and characterization, not to mention considerable innovation, make both facets of this book compelling. Unfortunately, it will be too long of a wait for the next Silent Empire book.
Copyright © 2020 Thriftbooks.com Terms of Use | Privacy Policy | Do Not Sell My Personal Information | Accessibility Statement
ThriftBooks® and the ThriftBooks® logo are registered trademarks of Thrift Books Global, LLC