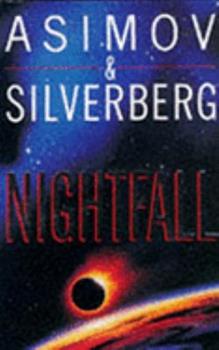 This description may be from another edition of this product. On a planet with six suns, night is about to fall for the first time in two thousand years . . . The planet Kalgash is on the brink of chaos--but only a handful of people realize it. Kalgash knows...

Published by Thriftbooks.com User , 18 years ago
Nightfall is a extrememly interesting book with amazing concepts. The storyline and plot keeps your eyes glued to the words, and you don't want to stop turning the pages until the climax. The book itself was written by both two of the most brilliant science fiction writers. Nightfall was only a short story by Isaac Asimov until he teamed up with Robert Silverberg. This book will pull you into the story as things turn dramatic. I read this in a matter of days and for you Sci-fi fans, you will be thinking about this book long after you read it.

Published by Thriftbooks.com User , 19 years ago
Nightfall is a novel about what would happen to a people who have never experienced night once the sun goes down. Asimov came up with the idea of a planet in a 5 sun system. There are almost always 2 or 3 suns in the sky. On rare occasions, there is one sun in the sky, but never are there 0 sun in the sky. However, unbeknownst to the inhabitants of the planet (since it is never night and they do not see stars), the solar system also contains another planet the rotation of which causes an eclipse once in a great while. The eclipse just happens to always occur on a day in which only one sun in the sky. Therefore, during the eclipse, the planet experiences night. Asimov wrote a short story about this planet and Silverberg and Asimov extended it to a full-length novel. I loved the novel and later found the short story and thought that was extremely well-done too.In the novel, a group of scientists discover that the eclipse and the nightfall are imminent just at the same time as archeologists discover that societies have risen and fallen on the planet at regular intervals. The only other people who believe night is coming are the priests of a religion with whom the scientists do not get along. Thus, society is unprepared for nightfall despite the warnings of the scientists and the priests. Devastation follows during night as well as during the eternal day following the night.Asimov and Silverberg do a compelling job setting up the discovery that night is coming. Their description of the actual eclipse and the reaction to it is truly fantastic. I also enjoyed (although a little bit less so) the description of the shambles of society after the day dawned again and, again, a little bit less, the rest of the story, although the characters have been written so well by this point that you really care what happens to them. The end could have been handled a lot better. The book ends abruptly, and, I think, in an unlikely way.However, the ending is nothing that should stop you from reading this extremely well-done book about a truly creative idea.

A delightful jaunt into the short and sweet

Published by Thriftbooks.com User , 19 years ago
Like Fahrenheit 451, Asimov tells a very believable story about a people coming into knowledge -- but with terrible consequences. Unlike Fahrenheit 451, however, Asimov tells not of the continuous evolution of a people, but of a cyclic rise and downfall. Or, rather, Nightfall.Kalgash is an Earth-like planet in all but one respect: it is surrounded by six suns which in turn provide illumination so that the planet is never in darkness. Most of the time there are at least three suns in sky; but on extraordinary days there can be as many as five. The residents know darkness only as a fearful presence that lurks in caves, and they never subject themselves to it, even sleeping with a sort of nightlight during the duskiest parts of the day.However, evidence exists that every 2049 years there is a total eclipse, enshrouding every part of the planet in complete darkness for several hours. This evidence is murky and incomplete, having just been turned up by an archaeologist and held by religious fanatics since the last eclipse. However, records indicate that the time of the eclipse approaches within the year, and astronomers begin to see the signs that there is something else lurking in their sunny universe that they had been previously unaware of, which spells mankind's insanity and destruction.

Among the Best SF novels ever written

Published by Thriftbooks.com User , 19 years ago
Nightfall, by Isaac Asimov and Robert Silverberg, is set on a planet that has six suns and perpetual daylight. The plot revolves around an unlikely event: an eclipse that shrouds the world in darkness for several hours. The main characters in the story are all scientists, and they are able to predict the arrival of the eclipse, but not its results. Because people on this world have lived with sunlight for their entire lives, the darkness inflicts severe psychological trauma on the population. The book is divided into thirds, with the first section showing the discovery of the eclipse, the second section is set on the night of the eclipse, and the third shows what happens afterwards.This is a fairly short novel, just over 300 pages, and the authors' writing is quite good. I think that Asimov does a better job with the characters and dialogue in Nightfall than he did in most of his other novels. Also, there isn't much time wasted on long descriptions or on lecturing about the novel's themes, so the novel keeps moving at a good pace. I would have liked it if a little less time was dedicated to the character's personal lives, especially since some of their actions during and after the eclipse seem a little bit absurd. Overall, the book's strongest component is the originality of the concept. The idea of a world where darkness is a catastrophe is so different from the repetitive and predictable plots of so many other SF novels that I found Nightfall hard to put down, even when reading it for the second time.Some people have complained that the authors' attitude towards religion is insulting, but I disagree. I don't think that they intended to bash all religions. They were, rather criticizing fanatiscism and cult-like behavior. And while some people might not agree with Asimov's rigid insistance on following science and logic at all costs, that shouldn't prevent anyone from enjoying the book as a good work of science fiction.

Published by Thriftbooks.com User , 22 years ago
Really one word. No further comment is necessary on this book. It is magnificient.
Copyright © 2020 Thriftbooks.com Terms of Use | Privacy Policy | Do Not Sell My Personal Information | Accessibility Statement
ThriftBooks® and the ThriftBooks® logo are registered trademarks of Thrift Books Global, LLC