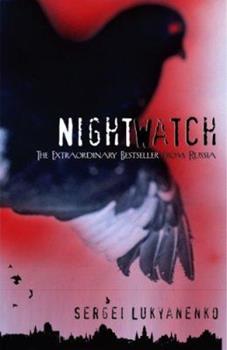 The battle of good versus evil takes shape in the first in a trilogy of blockbuster science fiction bestsellers from Russia. Soon to be a major motion picture from Fox Searchlight films.

Published by Thriftbooks.com User , 14 years ago
Night Watch is a well written and stimulating new entry into the genre of contemporary gothic horror. The novel follows the progress of agent Anton of the Night Watch in Moscow as he is gaining his first field experience after working a desk job for the Watch for several years. Anton is referred to as a Light Magician with some potential but little experience, and the Night Watch he works for is the mystical law-enforcement agency that oversees the actions of the dark magical beings; werewolves, vampires, and dark witches and sorcerers. As part of the Night Watch Anton interacts with a cast of interesting mystical characters, both light and dark with their own motivations and emotions as he tries to unravel the series of mysteries presented to him. These characters (both light and dark) grow on you over the course of the novel, where they may seem to be paper thin creations when you first encounter them they each deepen in the course of the novel and in the sequels. The novel is broken into three novellas that happen sequentially. Each novella stands mostly on it's own, but does build on the events of the previous. In the first section, Anton must determine the cause of a curse hanging over a single woman that threatens all of Moscow and possibly the world. In the second Anton is framed for the murders of dark ones and must find the real culprit and clear his name. In the last, all the pieces scattered around the board are gathered together into an end-game, Anton is torn between duty and his own motives as he slowly sees the potential outcomes of his actions in the previous two stories. As he pieces everything together he has to determine what forces are at work and how his actions and his motives work into the final intrigue, whether he is a force for good, evil or if his motivations merely selfish. The Watch Series focuses on the agencies of light and darkness (good and evil if you will, though the tags are not entirely appropriate for this series). The Night Watch are agents of light watching over the practitioners of the dark during their preferred hours. The Day Watch are agents of darkness watching over the practitioners of the light during their period of the day. Their goal is to make sure that neither side tips the scales of light and darkness in their own favor in their over-reaching struggle for the fate of the world. The over-reaching fantasy mechanism is the existence of "The Twilight" is the magical realm parallel to our own which the "Others" have access to. Emotions and the spiritual essence of the world fuel the Twilight as light, or dark energies (happiness or grief respectively). An "Other's" ability to manipulate this emotional energy in the Twilight defines his or her ability as a light or dark magician. Various creatures of myth appear, mostly as denizens of the darkness, but one can imagine there are an equal number of light creatures waiting in the wings that just don't get any page-time. The author, Sergei

Published by Thriftbooks.com User , 14 years ago
I saw the movie, then ordered the book. The book is far better. It's new-feeling even though the dystopic, gritty, urban fantasy landscape is getting pretty common in the US market. It's fresh to our eyes because the setting is in Russia, and the characters have different outlooks than we are used to seeing. There's a "life sucks, so deal with what you're dealt and don't whine" sort of underlying attitude that I found interesting. The POV character is seemingly depressed, but he muddles along, and is a good guy. The evil is evil but you can sort of see their side of things, too. In short, it is a world made up of gray, and you are ultimately left to decide for yourself what is right and wrong with this world. Also, a killer mystery/thriller plot.

Published by Thriftbooks.com User , 15 years ago
I saw the movie when the limited screening was released in Los Angeles. I loved the movie so much that I had to read the book, I only had to wait 6 months till that happened. I read the book in 3 nights and I was very surprised, I didnt realize that the movie was made following only 1/3 of the book, just the first story. I found the other two parts just as good and it really made me enjoy the movie even more. All in all a very good book and a very fast read, I'll definately read it again and I can't wait until Day Watch comes out in January!

Published by Thriftbooks.com User , 15 years ago
Truly a diamond in the rough. I couldn't put it down. I can see why this was a bestseller in Russia, and I wonder how long it will take for this to become popular in the United States. The story moves fast and holds your attention on each page. You may be a little lost at first, but you catch on fast. I rate this 5/5 and hope that other people enjoyed it as much as I did!

Published by Thriftbooks.com User , 15 years ago
I have been a reader of Sci-Fi and Fantasy for almost 50 years, and I can say that this is the best "first novel in a series" I have read in about ten years. In fact, I literally could not put it down, starting it at 10PM on Friday night and finishing it at 3AM on Saturday morning. Then I couldn't sleep thinking about the ideas in the book. If you have read translated Russian fiction, you will find a familiar feel to the translation that accentuates the best of the Russian Masters. At the same time, as ideas go, the premise is an ingenious variation on a recurrent and Manichean theme -- Light versus Dark. The story is told through the perspective of Anton, a Night Watcher, who works for an Agency that (1) keeps its eyes on the forces of the Dark; (2) enforces an uneasy and temporary truce with them; (3) pursues its own inscrutable agenda in preparation for the inevitible struggle to tip the balance of humanity one way or the other. I have not enjoyed a novel on this theme one-tenth as much since the late Roger Zelazny's "Jack of Shadows", which I thought superb. Yet, Night Watch is even better and more nuanced. While long (about 500 pp), it is deliciously detailed but fast paced. The characters are wonderfully drawn as we discover new things about them through Anton's eyes, and he becomes increasingly ambivalent about the "party line." I agree that only a contemporary Russian could tell this story as effectively, given the recent history of that country. You will be constantly surprised and entertained as you deduce the real rules that govern this Earth and see the characters develop. This was a great read, and I can't wait for the next installment. Because the novel is told in the first person point-of-view, I have some skepticism of how well this can be turned into a movie, and still convey the complex ideas and character development -- especially that going on in Anton.
Copyright © 2020 Thriftbooks.com Terms of Use | Privacy Policy | Do Not Sell My Personal Information | Accessibility Statement
ThriftBooks® and the ThriftBooks® logo are registered trademarks of Thrift Books Global, LLC