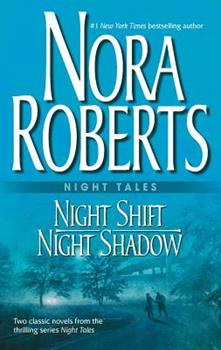 (Part of the Night Tales Series)

Published by Thriftbooks.com User , 14 years ago
In the last year I have made it my mission to read strictly Nora Roberts books or her JD Robb series. I find all of her writing extraordinary. Night Shift/Night Shadow are two great stories which are the first in a series of 3 books and 6 stories. I am on the second book now and enjoying it as much as the first. I highly recommend it. I also recommend the Sisters Island Trilogy. Absolutely fantastic. I've never read anything I didn't like by Nora. I have read over 75 of her books.

Published by Thriftbooks.com User , 16 years ago
When I first picked this book up, I was skeptical of the second half (Night Shadow), but was more than pleasantly surprised to find out what an excellent read it was. Truly wonderful writing, wonderful story, characters, and plot!!! Great book for anyone who likes the idea of a super hero. I likened the male lead to a Batman of sorts - troubled, but doing what he feels is necessary. Great interpretation of the archetypal male hero.

Published by Thriftbooks.com User , 17 years ago
I HAVE ALL THREE BOOKS AND THEY ARE GREAT. I READ THEM OUT OF ORDER BUT THEY WERE GREAT. I WILL CONTIUE TO BUY NORA ROBERTS BOOKS. I JUST BOUGHT 50 DOLLARS MORE OF THEM, DEBRA CANNON

Published by Thriftbooks.com User , 17 years ago
I liked these stories for a few reasons. Both were written in 1991. I did not become aware of Nora Roberts until 1995 with her J>D>Robb series. These two stories were excellent. <br /> <br />I noticed similarities in both stories to characters and situations in the "In Death" series, which began in 1995. <br /> <br />Particularly, Night Shadow. Gage Guthrie was probably the prototype for Roarke. Even Deborah's name was O'Roarke. Gage's home, computer rooms and many of his lines were in incubation for Nora's new police procedurals. Summerset is also present as Frank, Gage's major domo, who has a charming character all his own. <br /> <br />I believe Eve was modeled after Althea in 'Night Shift'. She has her own story coming up soon. Either way, it was exciting to me that I discovered this similarity and I enjoyed these stories immensely. <br /> <br />Night Shade and Night Smoke are being re-issued soon. I will buy these and try to find more similarities; at the same time enjoying Nora's inventive and prolific mind. Can you tell, I'm a real fan? :D:D:D:D:D <br /> <br />

Published by Thriftbooks.com User , 17 years ago
I'm a new reader of Nora Roberts so I thought I'd begin with this book that has 2 short stores within it, just to see what I thought. Am I ever glad I did! Both stories found within this book are excellent, suspenseful romances. I like how each dealt with different places and stories but also dealt with 2 sisters. The first story, Night Shift involved Cilla O'Roarke while the second, Night Shadow, involved her younger sister, Deborah O'Roarke. In the second, which took place years into the future, we got a glimpse of what happened with Cilla and Boyd from the first story while learning what Deborah had been up to later in life. I'd definitely recommend this to anyone who's either thinking about reading any novel by Roberts or an already Roberts fan.
Trustpilot
Copyright © 2022 Thriftbooks.com Terms of Use | Privacy Policy | Do Not Sell My Personal Information | Cookie Preferences | Accessibility Statement
ThriftBooks® and the ThriftBooks® logo are registered trademarks of Thrift Books Global, LLC