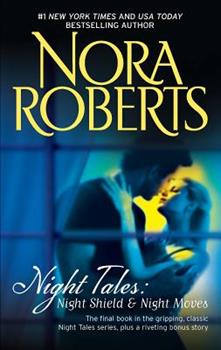 (Book #5 in the Night Tales Series)

Jonah Blackhawk knew forbidden fruit when he tasted it, and Ally Fletcher definitely fell into that category. The lanky blonde wasn't just a cop, she was also the police commissioner's daughter. No matter how sharp or constant Blackhawk's hunger may be, Ally was off-limits. She needed to finish her case, get out of his club and out of his life, before the memory of their passionate embrace consumed him. Until then, he'd stay away from her and keep...

Published by Thriftbooks.com User , 12 years ago
I haven't read Night Moves yet, but Night Shield was fabulous. Nora Roberts has been a favorite of mine for years, and has inspired me on more than one occasion. Great book with fabulous dialogue: '"-I go for guts and efficiency over the power stroke any time." "Is that a baseball statement, or a life statement?" "Blackhawk, baseball is life." "Now you've done it. We have to get married." "My heart's all aflutter." She said dryly-' ~Night Shield. Probably one of my favorite romantic banter moments.

Published by Thriftbooks.com User , 14 years ago
This is another Harlequin reprint of previously published stories by Nora Roberts. Nora is one of the most prolific romance authors and she writes a variety of stories, these both go on the solidly "contemporary romance" shelf. There is a bit of a mystery but these are both "feel good" stories that won't make you think too hard. Night Shield (2000) features characters from previous Night Tales after a generation has passed. Allison Fletcher is all cop, like her father the police commissioner, and is determined to solve the ring of burglaries that are targeting upper middle class Denver couples. Jonah Blackhawk, street punk turned entrepreneur, doesn't want to have undercover police in his new nightclub but is obliged when Allison's father calls in a favor. Sparks fly between the two as they work together to find out who is behind the thefts. Night Moves (1985) is a great look at rural Maryland meets Hollywood in the eighties. Famous songwriter and musician Maggie Fitzgerald is trying to leave behind L.A. and settle into the quiet life when her new puppy finds a skeleton in the backyard. Her incredibly attractive but very surly landscaper Cliff Delaney is determined to keep his body between Maggie any threat. The stories in this book are not part of the four volume "Night Tales" omnibus published in 2000 when Night Shield came out.

Published by Thriftbooks.com User , 17 years ago
This author has never disappointed me. Love her books and enjoy going back and re-reading them years after the fact. Definite keepers. Need to build a bookcase just for her books. As JD Robb she is unsurpassed. Always entertains-always enjoyable-always raises thoughts and ideas of current and past life choices. Long after the books is over the characters and stories stay with you.

Entertained if not overly impressed

Published by Thriftbooks.com User , 17 years ago
I decided to give these two short stories four stars because, while I wasn't rocked by them, I knew I was probably getting two reasonably good stories in which to pass the time with, which I did. It had been a while since I'd read any Nora Roberts books. I usually stick to her trilogies, feeling like those usually deliver more of what I've come to expext from her. The first story, Night Shield, is about Detective Allison Fletcher and former bad boy Jonah Blackhawk. Allison comes from a family dedicated to upholding the law, while Jonah has had a past steeped in breaking it. Both are distrustful of one another even though they must work together to catch thieves that have been targeting customers at Jonah's clubs. Neither wants to give into the obvious attraction that sparks between them, but are helpless to avoid it. I have to admit that Jonah drove me crazy in this story at times. He had the biggest trust issue of the two, and I just wanted to hit him at times. Maybe this is good thing? Possibly, if it makes the reader feel something for the characters, no if it just makes you want to turn the pages to get to something better. Night Moves was by far the better story. It deals with many stereotypes we encounter in everyday life: Celebrity impressions, small town prejudices, general assumptions about people that usually just don't hold true in real light. Maggie Fitzgerald is a grammy award winning movie score composer that has had it with the high-flying intense action of Hollywood. She's ready for a change and buys an old home and some land in a small rural community, far removed from the hustle and bustle of her busy life...or so she hopes. What she doesn't plan for is Cliff Delaney, landscaper extraordinaire, the feelings he stirs in her, or what he finds in her front yard. I wanted to ring Cliff a new one a few times for not wanting to give Maggie a chance to prove herself. Most of the time he just assumes she is a spoiled rich girl, but he comes around by the end. Maggie turns out to be more than he bargained for and is more than able to prove herself to him. This story makes you stop and think about how we tend to judge people without truly knowing them first. Overall, a great book to curl up with on a quiet night. My only complaint is that I wish Roberts had fleshed out her characters a little more. It seems to me that she tends to create characters that are too "tidy". Yes, they get angry, yes, they feel passion, but it all seems like it's contained in a nice neat box. When Roberts describes their feelings, it's as if there is a line that's never crossed. I wish she would let her characters cross that line more often.
Trustpilot
Copyright © 2022 Thriftbooks.com Terms of Use | Privacy Policy | Do Not Sell My Personal Information | Cookie Preferences | Accessibility Statement
ThriftBooks® and the ThriftBooks® logo are registered trademarks of Thrift Books Global, LLC