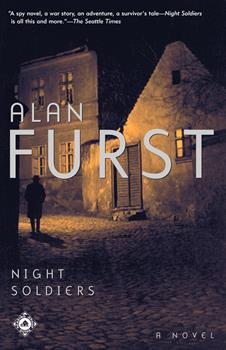 Bulgaria, 1934. A young man is murdered by the local fascists. His brother, Khristo Stoianev, is recruited into the NKVD, the Soviet secret intelligence service, and sent to Spain to serve in its civil war. Warned that he is about to become a victim of Stalin's purges, Khristo flees to Paris. Night Soldiers masterfully re-creates the European world of 1934-45: the struggle between Nazi Germany and Soviet Russia for Eastern Europe, the last desperate...

Published by Thriftbooks.com User , 16 years ago
Alan Furst is the anti-LeCarre. John LeCarre is still mired in the 1960s nihilism which holds that Communism, Fascism and Democracy are all moral equivalents, so that it doesn't matter who runs the world. That's all well and good as long as you have an English Channel between you and the sonderkommando and you have no moral compass. Alan Furst takes the exact opposite view, that there are things worth fighting for and that consent of the governed is preferable to genocide and torture. Furst writes better than LeCarre, too. In some ways, Night Soldiers is my favorite Furst novel. One follows the course of his protagonist's life for eleven years, so the reader gets to know the character and watch his development. As Khristo, the hero, goes from Bulgaria to Moscow to Spain to Paris to Prague and then down the Danube, his attraction to, and later, his disenchantment with, Communism are clearly understandable. Furst also tells the story from the viewpoint of a number of other characters, which is an interesting effect. Best of all, it is the longest of the Furst novels, which allows the reader to stretch out the pleasure of one of these great works of literature.

Atmospheric thriller for all who enjoy spy novels...

Published by Thriftbooks.com User , 18 years ago
For those of you unfamiliar with Alan Furst, he currently writes espionage thrillers set in Europe between the mid-1930's thru WWII. I say currently because Furst did write some earlier novels unrelated to this, but most people know him for his WWII era spy novels, of which Night Soldiers is the first.Another feature of Furst's novels is that no matter where they start or end, all of the books wander thru Paris at one time or another... and not just the City of Lights and Romance, but the dark underside of Paris also. Furst also likes the have some consistency between his later books, so usually there will be one character who will apppear again in another book, perhaps with a different face...Night Soldiers is the story of Khristo Stoianev. The story begins in Bulgaria of the 1930's. Khristo has the misfortune of watching his brother killed by local fascists. After this, he himself is marked and so it is with some convenience that a Soviet agent recruits him to go to the Soviet Union. Khristo undergoes training at a KGB school for foreigners, and makes contacts that will follow him through the book. He also has early exposure to the mindless horror of the purges...From the Soviet Union Khristo goes to Spain... and from Spain to Furst's stylized pre-war Paris. Unfortunately, to say more would be to spoil too much of the plot. Khristo's story wanders through WWII: the plot twists, turns, and is sometimes a little farfetched but is always exceptionally well written, atmospheric and engaging. Furst occasionally will make a small historical error but its never enough to interfere with enjoying the read.I've read all of Furst's WWII books, and Night Soldiers was my absolute favorite. I was tempted to give it a four stars because of few small historical errors but I'll stick with five! Don't take the history as absolute gospel but enjoy the book as you would a few hours watching Casablanca. It really is the same type of experience.

Published by Thriftbooks.com User , 18 years ago
Night Soldiers is one of Alan Furst's longer novels, a fact that was most pleasing to me as I was carried along by the compelling story. I encountered him a few years ago in my never ending search for new authors of espionage/intrigue stories and have read all but his most recent novel. Reading other reviews I'm reminded that Mr. Furst approaches this genre much as Eric Ambler did, taking ordinary people and putting them in extraordinary circumstances. But as much as I've enjoyed Mr. Ambler's work, I find Alan Furst's writing more nuanced. He exhibits the skill of the finest writers in his evocation of place. I was transported over and over again into the world he created with his words. I appreciate the fact he brings his readers into locales not often explored in this genre. We visit Bulgaria and Spain in this book and Hungary/Poland in the Polish Officer. And his presentation of pre-war Paris is magical. As a student of history I am especially fond of writers who give me a grounded experience of both time and place. Alan Furst does both extremely well. If you haven't read him, do. If you have, you surely need no encouragement to read more. (If you like Alan Furst, you might want to check out Robert Littell whose most recent book is Company - a Novel of the CIA.)

Story of Intrigue and War

Published by Thriftbooks.com User , 19 years ago
Alan Furst explores pre and war time Europe though the eyes of Khristo Stoianev in his book Night Soldier. Khristo is a Bulgarian youth who watches helplessly as his younger brother is kicked to death by Nazis. Feeling powerless he hooks up with revolutionaries. Soon he must flee from Bulgaria and journeys to the Soviet Union to train as a spy. Night Soldier's is a chronicle of his life through a turbulent time as Khristo journeys through Europe.Furst tells this story of intrigue and war with great skill. The story begins with the brutal death of Khristo?s brother and continues from one war torn setting to another. It appears that there was no place of peace and hope for the people of this time and place. Furst clearly defines the brutality of the period and the difficult moral choices which the people of Europe were faced with. He has peopled the story with intriguing characters who react with courage, strength, cunning, avarice and fear. Many like Khristo are trying their best to see their way through these years to survive.Khristo is an ever interesting character. First driven to do what is right he is given a taste of the difficult choices in the life of a spy, when a lover betrays him and his superiors request that he take care of her. He soon finds the Russian tentacles under Stalin to be as evil as the Nazi's who he is fighting. He would like to elude them both and tries to, but in a warring Europe it is no easy task.For those interested in stories set in WWII or tales of intrigue this book is recommended.

Published by Thriftbooks.com User , 20 years ago
Espionage thrillers {the well written ones,anyway} are always compared to John le Carre. These books are different, more of a crooss between Graham Greenes morally ambiguous thrillers and Charles Mccarry's wonderful Paul Christopher series, and are quite brilliant. In NIGHT SOLDIERS ALAN FURST takes up the sweep of WWII in europe through the eyes of a Bulgarian named Khristo Stoianev.{Night soldiers are spies.} After watching Fascist militia stomp his brother to death, Stoianev embarks on a journet through Russia,barcelona and Madrid in republican Spain, Vichy France, and eventually,back home. The narrative is filed with fascinating historical oddities{the Sovites in Spain robbing 64 million pounds in gold from Spain, then decaring two days later to have discovered massive reserves in the Urals} the labrynith of the NKVD duplicity{the way they set traps is brilliantly presented}.Mr. Furst has obviously done massive research on the history of this era, and it shows. the Spanish civil war in all its crazed glory is etched perfectly, as again the Soviets play games with their own. This is an excellent book,written from the perspective of one of the lesser known countires involved{bulgaria}. Morally unsure if not ambiguous,this is front rank writing, Period.Highy recommended
Copyright © 2020 Thriftbooks.com Terms of Use | Privacy Policy | Do Not Sell My Personal Information | Accessibility Statement
ThriftBooks® and the ThriftBooks® logo are registered trademarks of Thrift Books Global, LLC