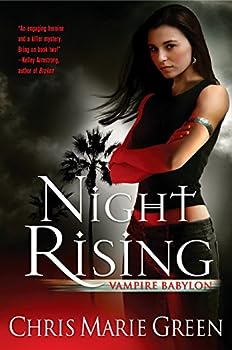 (Book #1 in the Vampire Babylon Series)

In this first book of an all-new trilogy, life proves stranger than the movies when a Hollywood underground coven of vampires comes to light-and gets targeted by the tough-as-nails daughter of a sexy... This description may be from another edition of this product.

Published by Thriftbooks.com User , 13 years ago
I liked this book. I just thought Dawn would be more kick A*s. The story was great. I hope as the books go on she fights back more. I would give this book a try. You might like it.

Not your typical vampire story....

Published by Thriftbooks.com User , 14 years ago
Dawn Madison's dad is missing. They haven't been close in years, both coping with the death of Dawn's mother, a famous Hollywood actress. Dawn was working as a stuntwoman but when her father goes missing, she returns back to L.A. Her dad was working a case for Limpet and Associates with Kiko Daniels and Breisi Montoya when he disappeared, a case involving the reappearance of a long dead child actor. Who are these people her dad was working with? The firm of Limpet and Associates has mysteries hidden in its walls, including Mr. Limpet himself~ or The Voice, as Dawn knows him as. Why does he hide behind his Voice only? Dawn is about to discover a whole new world... a world in which vampires do exist. Wow, NIGHT RISING simply blew me away! Chris Marie Green doesn't write your typical vampire story by any means. The world of the vampire has been done countless times in both movies and books but NIGHT RISING puts a whole new spin on the vampire. From the vampire hierarchy to the hidden world of the Underground, we are offered glimpses into a dark reality in which nothing is as expected. Chris Marie Green does a superb job with character development. I'd hesitated to read NIGHT RISING as I was afraid it would be populated with stereotypical ego-inflated Hollywood characters. Instead, Dawn's down to earth quality makes her a likable main character. She is a strong woman who knows her own weaknesses and works to achieve her goals in spite of them. Her mixed feelings over her parents add an emotional depth to the storyline. In contrast, Kiko Daniels is completely starstruck at times. It's hard to not like Kiko as his cheerful personality and determination to succeed are admirable. Chris Marie Green makes her characters believable, even in a world in which vampires do exist. How many times have I read an action packed book in which the main character has these extraordinary, but highly unbelievable skills? Dawn is a stuntwoman, a very clever choice by Ms. Green, as it makes her fighting skills appear genuine. NIGHT RISING is the first book in a trilogy. As one might expect, there are questions left unanswered as the story encompasses more than just this one book. After getting a taste of NIGHT RISING, I can't wait to see what surprises are in store for me with MIDNIGHT REIGN! Highly recommended! COURTESY OF CK2S KWIPS AND KRITIQUES

Published by Thriftbooks.com User , 15 years ago
Hollywood after dark is filled with more than just stars these days, as stuntwoman Dawn Madison finds when her father vanishes and she begins investigating. Dawn finds his colleagues mysterious - and uncovers a strange underground society made up of vampires that are deadly and dangerous. Humor and intrigue blend with mystery and the supernatural to make for a gripping detective science fiction tale hard to put down, and perfect for collections where patrons relish new vampire-themed novels. Diane C. Donovan California Bookwatch

Published by Thriftbooks.com User , 15 years ago
I expected a little more...well a little more attitude, a little less self pity, and a lot more self control from the main heroine, Dawn. I was almost disappointed that she had any part of my name, but I see room for character development and a little more maturity. The book really kept me hopping, with good spins on old vampire ideas and legends. It's pretty obvious who "The Voice" really is or rather what he is. But still very readable. After reading the book, I immediately started hunting for the next in the series, but it wont be out til Feb of 2008. All in all, the book was well worth the price and a lot was packed into the larger format book.

Published by Thriftbooks.com User , 15 years ago
Chris Marie Green does a fantastic job of launching her new Vampire Babylon series for Ace with the release of NIGHT RISING. This book will greatly appeal to a wide variety of readers. It has a fabulous mystery, the urban fantasy appeal, some romantic elements, all with a noir touch that makes this a true work of entertainment. Her characters are well crafted and masterfully flawed to resonate with readers. This book drew me in from the first and held me there to the end. Once you read this book you'll eagerly await the next book in the series.
Trustpilot
Copyright © 2022 Thriftbooks.com Terms of Use | Privacy Policy | Do Not Sell or Share My Personal Information | Accessibility Statement
ThriftBooks® and the ThriftBooks® logo are registered trademarks of Thrift Books Global, LLC