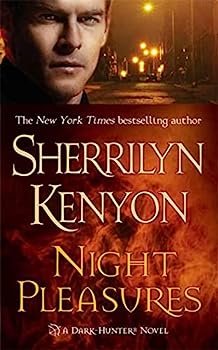 Dear Reader, Have you ever wanted to know what it's like to be immortal? To journey through the night stalking the evil that preys on humans? To have unlimited wealth, unlimited power? That is my... This description may be from another edition of this product.

Published by JuJu , 1 year ago
Love, romance but even more ACTION! I love the way Sherrilyn Kenyon can write about love but her stories don’t just focus on the love but tell a full story that happens to have love in it. Her books are always action packed with an adventure that keeps you involved throughout the whole book.

Published by Maddie , 1 year ago
Love love love this!!

So so so good

Published by Khalessi , 1 year ago
I read this because my friends have been raving. And oh my heart 😭 How I absolutely loved Kyrian from the moment he stepped onto the scene. I have a thing for broody, mysterious, don't want the girl guys. And what an amazing character Amanda was. What I loved about her is how she kept her cool throughout her meeting with Kyrian and finding out the truth. How open she was about her feelings and the devastation she felt after finding out how deep the betrayal that Theone wrought on him. I was just as angry as she was. Kenyon flawlessly switched between Amanda's and Kyrian's point of view without even having to point it out. Just absolutely fabulous writing. I love the development of all the characters and look forward to getting to know them better. What a brutal ceremony and thing for a dark hunter to have his soul back. And a testament of Amanda's strength and love for Kyrian. So glad I read this book!

Another Winner...and I can't wait for the next one!!!

Published by Thriftbooks.com User , 20 years ago
Sherrilyn Kenyon gets better and better with this first novel in her Dark-Hunter series.'Night Pleasures' is a great read, full of the spirited characters that have come to be one of Ms. Kenyon's trademarks. She mixes Greek mythology, vampires, and a magickally eccentric family that makes the gals on 'Charmed' look like The Waltons.Kyrian of Thrace is every woman's wet dream, but Ms. Kenyon infuses him with so much humanity that he doesn't come off as being a typical cardboard romantic hero. I'd have to say that he is a hybrid alpha-beta male. He's charming, loyal, brave, infuriating and sexy as all hell.Amanda, like her sister Grace (whom hopefully you've met by now from 'Fantasy Lover') is a spunky heroine who believes herself blessedly 'normal', and likes it that way. Of course, it's always the ones who swear they're normal who turn out to be anything but. I love the fact that Ms. Kenyon's heroines are unashamedly sexual, and they enjoy oogling over gorgeous men. And from the description of Kyrian in the book, I certainly wouldn't toss him out of my bed for eating crackers!Though at first glance this novel might come off as another vampire romance, Ms. Kenyon creates an entirely new mythos for our favourite undead creatures. There are gods and goddesses with typical bad attitudes, a psychotic demigod with a serious need to talk with Sigmund Freud, a Squire with a taste for hacking and grunge fashion, who just so happens to drive a Jaguar, and an old woman who makes some rather lethal dolls. For those of us who loved Grace and Julian, they're back too, with kids. By the way, Julian still hasn't quite figured out how to drive a car.Oh, and did I mention that this book has some really funny moments, like when Amanda wakes up handcuffed to the insanely gorgeous Kyrian?Oh, and I forgot to mention that Kyrian is about two-thousand years old and has mastered modern slang. For those of us a little tired of the typical 'old-world' bloodsucker.A fun romp, and now I eagerly await Talon's story. He's a hunky Celt who could give The Croc Hunter a few pointers.

A Great Start To A New Series!!!

Published by Thriftbooks.com User , 20 years ago
I loved this book! I am not a huge fan of vamipre stories but this one book has totally changed my mind.We briefly met Kyrian of Thrace in Fantasy Lover. In this story he is a Dark-Hunter that goes after the really bad guys. He has traded his soul to seek vengence on his wife, but unable to kill her he now walks the world in the shadows of night.Amanda has powers that she is unaware of or unwilling to admit too. She does not believe in the supernatural, or dark things. She is an accountant and feels that she is not a part of her wild gypsy family. (Selena from Fantasy Lover is her sister)These two unlikely people get paired together in a very unlikely situation. As a result there are laughs aplenty, great romance, and a lot of the supernatural! These two characters are perfect for each other. Hunter does not give his trust easily, and Amanda is not even aware of her appeal. You will not be let down by this fast page turning read. Plenty of the trademark sensuality and humor that is Sherrilyn Kenyon can be found in this book.

Sherrilyn Kenyon flys to the TOP with her Dark Hunters debut

Published by Thriftbooks.com User , 20 years ago
Kyrian of Thrace walks the world in the shadows of darkness, in solitude. What other choice could he have after having sold his soul for revenge? Kyrian lives his life searching out those who would steal souls from the innocent; the Daimons. He is a Dark Hunter that hails from Roman times, where he was a Prince, and a Macedonian Commander. He's used to being in command of every situation, and always calling the shots. Then he meets Amanda Devereaux. Amanda Devereaux is not having the greatest life lately. She's just been dumped by her fiancé-but after her family really laid on the hokey act for him, could she really blame him? And now her twin, Tabitha-whom she was REALLY steamed at-wants her to help her out by running down to her house to once again let the dog out. Sigh. When will she learn? When Amanda gets knocked upside the head upon entering Tabitha's house, and awakens to find herself handcuffed to a "buff stud in black leather", who claims to be a Dark Hunter--kinda like a vampire--she thinks she's learned. Hunter, as he claims that's his name, is one of the most awesome specimens of manhood she's ever seen-why, oh, why couldn't he be normal? Once Kyrian get himself and Amanda released from the handcuff, he knows he's got to get away from this intriguing woman. He can't trust himself around her, because he's enticed by every little move she makes, every breath. And he can't allow himself to be drawn in by a woman for anything. His life didn't make allowances for that. But he finds himself drawn back to her, again and again, and when he finds out that her life is in danger-what else is he to do except take care of her himself? Kyrian and Amanda light sparks off one another, and the contest to see who can one up the other makes for fun and lightning fast dialogue that will crack you up. The sexual tension sizzles off the pages, and the story is so fast paced and packed with action you trip over your own fingers getting to the next page. Filled with information and introductions to the Dark Hunter world, you'll find yourself reaching for the next book immediately-only it's not out yet! Sherrilyn Kenyon has written a keeper and a half. This book is filled with scene after scene that will amaze and tantalize you, and wonder when Sherri visited this world of her creation. She uses humor, and pain, and takes us the whole spectrum of our emotions. Perfection is the only word I can use to describe it, and I don't know that that conveys all that I feel about this book. I've already reread the Advanced Reading Copy three times, and am slobbering in anticipation of the next Dark Hunter novel. This is a MUST read!

Beginning of the Dark Hunters

Published by Thriftbooks.com User , 20 years ago
Kyrian, a 2000 year old immortal, prince of ancient Thrace and General of the army of Thrace, was betrayed by his wife to the Romans during the battle for the freedom of Thrace. Allowed to become a Dark Hunter upon his death, his purpose is to stalk the evil demons who prey on humans and steal their souls. In present day New Orleans, Kyrian awakens one night handcuffed to Amanda Devereaux. Amanda believes she is the only sane person in her family, consisting of her mother and eight sisters, all with paranormal attributes. But Amanda's sanity is about to be shaken when she discovers that a demon has handcuffed her to this beautiful man who claims to be an ancient Greek warrior. Deciding to play with him, the demon gives Kyrian 24 hours to hide before he comes after him. Upon hearing this, Amanda is not too thrilled to learn that they cannot get out of the handcuffs and she will be subject to the demon's wrath unless Kyrian can figure out a way to release her. When they finally escape, Kyrian learns that the demon has burned down Amanda's house so he is forced to take her to his mansion for safe-keeping. Knowing it is against the Dark Hunter rules to become involved with a human, Kyrian cannot help his growing feelings for Amanda which puts her in terrible danger. This leads to complications at a time when Kyrian needs all of his powers against a powerful demon that none of the Dark Hunters have ever faced before.This is the beginning of a wonderful new series by Sherrilyn Kenyon. It is a compelling fantasy about immortals who are a bit like vampires only in that they cannot go out in the daylight, but they do not drink blood, and are created by the gods to protect humans from the demons who kill humans and steal their souls. The Hunters stand between the demons and the total destruction of the human race. I loved this book and cannot wait for the next one in the series.

paranormal perfection and the beginning of a great series

Published by Thriftbooks.com User , 20 years ago
Sherrilyn Kenyon gets better and better. This is a shining example of what a paranormal romance should be. Kyrian of Thrace who I fell in love with while reading Fantasy Lover, is a man who was betrayed so badly by his wife that with his dying breath he sold his soul for vengeance and became a protector of mankind. Now, centuries later, he stalks the evil daimons ("vampires on steroids who have a God complex" [I really love that line]) who prey on humans.Amanda Deveraux is an accountant who wants a normal life even though her family is beyond strange. When an evil daimon puts them together and aims to kill both Amanda and her sister and any Dark Hunter he can find, Kyrian steps in to protect them.While they fight the evil baddies, the two of them find love and Amanda helps to heal Kyrian's tortured past and wounded heart. The story is spectacular, filled with great zingers and comebacks. I loved every character from Nick to Acheron to Talon to even strange Liza. The sex is steamy and hot and the pace fast and furious. I can't wait for the next Dark Hunter book.If you're looking for a read that you can't put down filled with humor, tenderness and red hot passion, don't miss this book.
Trustpilot
Copyright © 2022 Thriftbooks.com Terms of Use | Privacy Policy | Do Not Sell My Personal Information | Cookie Preferences | Accessibility Statement
ThriftBooks® and the ThriftBooks® logo are registered trademarks of Thrift Books Global, LLC