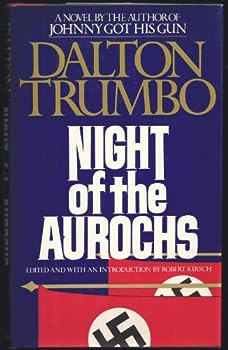 Night of the Aurochs

This description may be from another edition of this product. In the mold of the sociopath, Grieben bears some of the characters of cold blooded literary characters such as Hannibal Lecter. Yet as one observes the Grieben character evolve, one must question...

Published by Thriftbooks.com User , 14 years ago
In the mold of the sociopath, Grieben bears some of the characters of cold blooded literary characters such as Hannibal Lecter. Yet as one observes the Grieben character evolve, one must question whether the ultimate motive is power or a desire to be loved. Author Dalton Trumbo wrote the book with the idea that the charcter was struggling with power from childhood only to despair in his final years. Even then, he decides it was all worth it. In the end, Trumbo makes the reader look at the manipulative side of himself/herself to see our similar ugliness. From the manipulative and perhaps borderline sadistic exploitation of a neighborhood girl to his exploitation of a former interest at Auschwitz despite the potential barriers, it becomes apparent that power and love are closely related for Grieben. Because they are so closely related, his relationships are corrupted. From the first squirrel that he killed, there was a certain sense of detachment. When not involved with females, he chased other sources of power and authority in his military career. It becomes difficult for the reader to decide how to take the main character. Trumbo's work is clever in that he knows the reader will not readily identify with the character, but can the reader can share common elements with the Grieben. The great tragedy of this book is that Trumbo was never able to finish it. Most editions of the book include letters and notes from Trumbo which give extra hints about the character. The story was unfortunately far too short and left me thirsting for more.

Published by Thriftbooks.com User , 19 years ago
Dalton Trumbo,known mostly for his screen plays and for his role as part of the Holywood Ten,was also a wonderfull and deeplycompationet writer.Sadly , he died before compleating this book,so that we only geta glimps of the amazing work this would have been.The first ten chapters are compleat and deeply,disturbingly moving.The notes for the rest of the book and the compleat synopsis give a clear idea of the noval as the author intendede it to be. Give it a chance!
Copyright © 2020 Thriftbooks.com Terms of Use | Privacy Policy | Do Not Sell My Personal Information | Accessibility Statement
ThriftBooks® and the ThriftBooks® logo are registered trademarks of Thrift Books Global, LLC