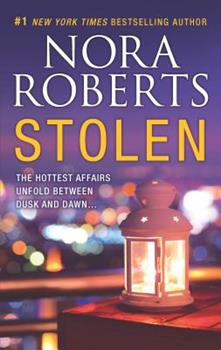 (Part of the Night Tales Series)

Two dark and dazzling fan-favorite tales of romantic suspense from #1 New York Times bestselling author NORA ROBERTS Nightshade Colt Nightshade can't believe his luck: he's been partnered on a case with the stunningly beautiful lieutenant Althea Grayson. But Grayson works strictly by the book, and she has no use for Colt's easygoing, renegade style. The case itself is demanding enough, but thawing the heart of his standoffish partner just might be...

Published by Thriftbooks.com User , 16 years ago
Night Smoke was an awesome book. It had a great storyline and was a definate page turner. This Book had my attention from the beginnning. Once I got going I couldn't stop, which says a lot for Nora Roberts, considering this was my least favorite.She is a great author who always comes up with good romance novels. I can't wait to read the next Night Tale, "Night Shield."

Published by Thriftbooks.com User , 17 years ago
Two engaging romantic suspense stories by Nora Roberts. Strong intelligent women in both stories matched to interesting men, with good, involving story lines. Definitely a page-turner, and only the fact that there is a previous book and a book-still-to come in this series prevents one from regretting from racing through it at top speed.

Published by Thriftbooks.com User , 17 years ago
This is a re-release for a new generation of Nora Fans. NIGHTSHADE: This is Boyd Fletcher's partner from Night Shift, Althea Grayson's story. Her 'nemesis' is Colt Nightshade. Their relationship is hot and heavy. Lots of wonderful tension. He gets under her nails and then, she lets him. Basic mystery story comes close to my profession of abuse counseling, and it was well done by Nora. I am convinced that Althea is the prototype for Eve Dallas in Nora's J. D. Robb series. It was fun recognizing the signs. The story was very good. Nora sure knows how to write a love scene. NIGHT SMOKE: This was Natalie's story and my least favorite of the four "Night Tales". But it did bring back all the characters from the 3 previous stories. The 'family' aspect of that is something I liked a lot. I consider all of Nora's books Keepers. They entertain and what more could you ask?

A Bit of Murder, Mayhem, Secrets and Romance

Published by Thriftbooks.com User , 17 years ago
NIGHT MOVES was one of Nora Roberts' earlier attempts at mystery and a good attempt it was! This story had me captivated from the first page and continued until the last. In fact, I was a bit depressed when I read the last page because I wanted the story to continue. Too bad this isn't a recent novel with 300+ pages! Famous songwriter, Maggie Fitzgerald, buys a vacant house in a tiny town in Maryland, as far from the public eye as possible. Maggie's husband had died under mysterious circumstances before she purchased the house and Maggie was tired of always being in the public eye. She was tired of people wondering about her husband's death. She was tired of always being watched. She was just tired. The house she bought had been vacant for many years and restoring it to its original state was taking more time and energy than Maggie had anticipated. She hired a local landscaping company and meets the owner, Cliff Delaney, who has more secrets than the house itself. And then the mystery begins. While landscaping, a body is unburied - not a transient's corpse but the body of the previous owner who everyone had thought only missing, not murdered. As a stand-alone mystery this book would fall short as the story is somewhat predictable, and avid mystery readers will figure out the villain about half way through the book. But when you throw in the intrigue and romance, it rounds out to a very pleasurable book. If you're looking for an action packed mystery with lots of guessing as to the murderer, this is not the book for you. If you're looking for a book with a little bit of everything and a pleasant way to spend a few hours, you should get this one!

Published by Thriftbooks.com User , 22 years ago
It was just a neglected old house in a sleepy small town, but widowed Maggie Fitzgerald knew she could call it home. And Cliff Delaney the landscaper she'd hired, was sexy enough to make evan the saddest woman smile. But then a body was uncovered on her land-and Cliff had a motive for the murder...
Trustpilot
Copyright © 2022 Thriftbooks.com Terms of Use | Privacy Policy | Do Not Sell My Personal Information | Cookie Preferences | Accessibility Statement
ThriftBooks® and the ThriftBooks® logo are registered trademarks of Thrift Books Global, LLC