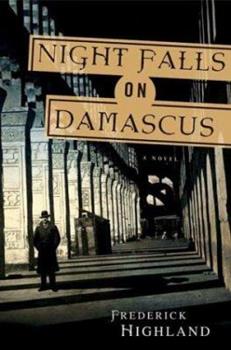 Night Falls on Damascus: A Novel

Police Inspector Nikolai Faroun, is caught up in a complex murder investigation of the beautiful and controversial Vera Tamiri. He suspects that she may have fallen victim to a gruesome crime of passion. However, he soon realises that there is more to this crime than a jealous lover.

Published by Thriftbooks.com User , 12 years ago
I am a picky reader of mysteries and this meets the bill on so many fronts - the characters are developed and interesting, the story and background of the plot are intriguing and one really can't get the clues too easily. Highland has opened a whole new world. Here's hoping that there are more Faroun mysteries in his portfolio. The author's website, frederickhighland.com, is also worth a visit.

will remind the audience of the Mamur Zapt tales

Published by Thriftbooks.com User , 15 years ago
In 1930s French controlled Syria, Chief of the Damascus Prefecture Police Inspector Nikolai Faroun investigates the gruesome murder of modern westernized woman Vera Tamiri. Nikolai always tries to do a thorough job, but this time the pressure is higher than normal as the victim comes from an affluent powerful local family. Nikolai assumes like most of the brass that an angry jealous lover killed Vera for dumping him though who remains an issue. However, being a professional he begins to also look elsewhere amongst her friends, family, and business associates; especially the latter as Vera was deeply involved in many philanthropic projects demanding social changes to grant rights to the abused and oppressed women and children, who in the her mind were treated as being less than slaves. NIGHT FALLS ON DAMASCUS is actually a complex somewhat convoluted historical mystery that brings to life Syria during the 1930s French occupation. Readers will follow the exploits of Faroun as he investigates the murder, but also learn how angry the locals are with the European neo-colonial occupation. Though two decades later, Frederick Highland's fine mystery will remind the audience of the Mamur Zapt tales by Michael Pearce. Sub-genre fans will appreciate this whodunit and want more appearances from Police Inspector Faroun. Harriet Klausner
Trustpilot
Copyright © 2022 Thriftbooks.com Terms of Use | Privacy Policy | Do Not Sell My Personal Information | Accessibility Statement
ThriftBooks® and the ThriftBooks® logo are registered trademarks of Thrift Books Global, LLC