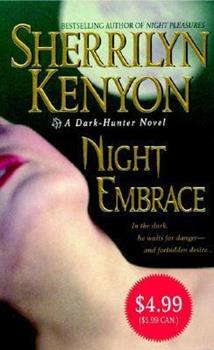 Dear Reader, Life is great for me. I have my chicory coffee, my warm beignets, and my best friend on the cell phone. Once the sun goes down, I am the baddest thing prowling the night: I command the elements, and I know no fear. For centuries, I've protected the innocent and watched over the mankind, making sure they are safe in a world where nothing is ever certain. All I want in return is a hot babe in a red dress, who wants nothing more from me...

Published by Maddie , 1 year ago
Love love love it!

Published by Thriftbooks.com User , 19 years ago
Since stumbling across Sherri's website almost 2 years ago I have read almost everything she has written, and have never once been disapointed. NE was probably one of the best of the lot!!All too often romance books are nothing but cookie cutter versions of each other, but not one of Sherri's. The whole series has been carefully planned out, and in conjuction with the website http://dark-hunter.com a whole other world is opened up to the reader.Reading NE was like taking a trip back through New Orleans as Sherri captured it outstandingly, (of course she lived there for so long it shouldn't have been hard) every scene could be so clearly seen in my mind. Sunshine, while slightly ditzy, was a refreshing change from the usual boring advertising executive or marketing type heroines we are subjected too.Talon, Acheron, Nick, Zarek, Val, Kyrian...each of them all have unique powers, coming from their unique differences, which will lead to unique stories.Although it is adviceable to read the books in the right order, Fantasy Lover, Night Pleasures followed by Night Embrace, the books will still be an amazing read on their own.I rate NE as a 5 star book because Sherri has taken the time (about 20 years or so) to combine real greek mythology into a highly believeable and proveable vampire series with a real twist. Those of us with imagination will never ever be disapointed reading a book by Sherrilyn Kenyon!!!

If only five stars wasn't the maximum...

Published by Thriftbooks.com User , 19 years ago
All I can say is Oh dear LORD... Excellent, superb, amazing writing is here. Sherrilyn Kenyon is such an awesome writer, I can't get over it - and I'm DYING for the Zarrick tale to get out. This story was great, just absolutely phenomenal, as were the other books (I haunt the book stores, waiting for the next novel to come out, buying it the first day - I'm insane like that), and I'm ALWAYS left wanting more! I finish one of her books and then turn it over and begin again.Very humourous, mixed with serious feelings and plenty o' action, nothing's lacking. I've found Talon incredibly sexy since he was introduced in previous novels, and I was SO glad when this one came out. (And I could totally relate to his love for chicory coffee and beignets! YUM!) Talon's ego in the beginning was so hilarious, especially his tripped-up thoughts on Sunshine's nonchalant attitude after their hot christening of every available surface in Sunshine's apartment. Another thing I loved about this novel was Sherrilyn's descriptions of her characters - Sunshine being a "real woman with curves" instead of the slender sticks I usually read about, and the wolf's amazing attraction to the "plus-size model" woman. Of course, her description of Talon's nicely sculpted body wasn't bad either ;-).I'm also glad Talon recognized his weakness of not being able to leave Sunshine...Okay, I have NO idea what I'm trying to say but that the Dark-Hunter series is absolutely AWESOME!! If you EVER get a chance to read it, please do so, it's not a waste of time. I am also a very huge fan of Nora Roberts - and if you are, too, you're tastes probably run along the same lines so... you'll probably agree with me when I say sherrilyn kenyon is one of the best.

Published by Thriftbooks.com User , 19 years ago
What do you get when you take a Dharma character (In this case Sunshine our heroine) and Talon the sexy Dark Hunter? Answer: A book that you will not be able to put down regardless of what you have to do or should do. Ignore the ringing phone, the laundry, and all the other chaos that makes up your day and read this book! Ms. Kenyon manages to take her quirky humor, fun characters, and sexy hero's and combine them all into a fast paced read that transports you to present day New Orleans and makes you wish for a dark hunter all your own. Old friends from her previous dark hunter books (Julian, Kyrian, and Nick) visit and add their own mark to the story.Sunshine is a new age, health food loving artist who is the product of flower children parents. She is friends with Selena (Fantasy Lover) and comes across some Daimon's on her way to a coffee house (she hates coffee but her friends love it). Talon comes to her rescue but get injured by a mardi gras float so Sunshine takes him home to her Pink loft. Talon awakens in a pink nightmare but is instantly drawn to Sunshine. He can't help his feeling for her despite the oath that he took and the promise never to feel again. Ms. Kenyon then gives us a lot of background information about Talon's past which is heart breaking and makes you understand why Talon is the way he is and you find yourself cheering Sunshine on in her attempt to win the heart of her dark hunter. Soon they realize that they share more of a past then either one of them thought which adds to the excitement of evil that is lurking in the shadows of the French Quarter.This book is action packed and I can't wait for the next installment of this series. Do yourself a HUGE favor and add this book to your MUST READ list! You won't be sorry!!

Over the Top but a Great Read

Published by Thriftbooks.com User , 19 years ago
Sherrilyn Kenyon has created an alternate world of the paranormal. For those readers who enjoy the vampire/action/love story, this series is quite refreshing. The author uses Greek Mythology to create the Dark Hunters a group of men and women who defend humanity from the things that go bump in the night. Dark Hunters surrender their souls to the Greek goddess Artemis when they die and in turn become immortal with all sorts of powers. Each book can be read on its own although there are recurring characters from previous books and broad hints about what is to come with others.Talon, the main character in Night Embrace, appeared as a side kick for Kyrian in Night Pleasures. Talon was a Celtic tribal chieftan and warrior who was killed by an evil cousin who wished to take over the tribe; in the process his younger sister was slaughtered in front of him. To make matters worse, the Celtic war god cursed Talon for killing his son in a battle. Therefore, Talon is doomed to have any human that he loves die. For centuries he fights Daimons (evil soul stealing descendents of Atlantis) and is very much satisfied with his life. Naturally, he meets his soul mate and all his carefully buried emotions come roaring back at a very inopportune time for a being whose career is defending humanity. While the characters are what could only be called ultra-alfa males they all have crippling weaknesses and the author uses humor very, very effectively to relieve the horrendously sad existence that most of the Dark Hunters live.Kenyon's world is totally outrageous and great fun. It is a tribute to her judicious use of humor and mythology that the reader buys into the fantasy. Furthermore, she really knows her mythology because a quick check on some of her inferences and references revealed that Kenyon had done her homework. And finally the world of the Dark Hunter appears to be very complete in the author's mind. The back story is clear so she avoids the problem of dates that don't match or inconsistent myths to support the story. Finally, these are hot books not meant for children although the entire love story is about redemption and finding THE one person that completes the hero and heroine. Definitely a five star keeper.

It will beak your heart and then mend it again

Published by Thriftbooks.com User , 19 years ago
I have waited impatiently for Talon's story and now that I had the opportunity to read this book, it has made my faith in Sherrylin's talent even stronger. Talon, first introduced in Night Pleasure (Kyrian's story) is enjoying his chicorry coffee and warm beignets at Cafe Du Monde, while taling to his best friend Wulf on the phone. He notices a group of Diamons waiting to make a meal out of any tourist. Regretting having to leave his warm cofee and beignets, he gets to meet a woman who turns his life upside down. Sunshine Runningwolf is a starving artist who has " the attention span of a sick flea." After their meeting, Talon can't keep Sunshine out of his head, while their enemy have their own plans to destroy them both. Cumulus, a Celtic God who hates Talon and has vowed to make him and his suffer, and Dyonisus, a Greek God wanting to gain his Godhood, join forces with Stynx. Stynx wants to keep Talon and Acheron occupied while he sets his plans to get vengaence.This book is fantastic from beginning to end, it grabs your attention completely and sets in motion a joyride that will keep you glued to your seat. "Night Embrace" has so many aspects that you will be dumstruck once you start reading. In this book we finally get to meet Zarek, the psychotic SOB, according to Nick. Valerius, the Roman general who both Kyrian and Julian would die to get their hands on. And Vane and his brother Fang, Katagari slayers who help Talon and Acheron more than once. These characters will turn this book into an enjoyable ride for the readers as it delves more deeply into the personalities of each one of themThis book is so multifaceted, first we have the wit and humor the characters posses, and then we have the seriousness and the danger. Both being opposite extremes that anyone will be able to enjoy. The ending blew me away since it has the most heart wrenching scenes I have ever read, especially Acheron's. The ending is the essence of the book and it's well worth anything since it gives you what I consider one of the best parts of the book and scenes that will be unforgettable for anyone reading it. You don't even have to like the book to consider the last scenes the best you have ever read. What I appreciated mostly in this installment on the Dark Hunter Series was how the reader gets to know more of Acheron's past and the many demons that haunt him. Since "Night Pleasures" Acheron became one of my favorite characters and learning more of him in this book became a treat. The book really gets you to understand many of his peculiar actions and you finally discover what his real hair color is. For that you will have to read, I will not spoil it. Now, I'm waiting for the next installment, Zarek's story, which I'm sure will be just as enjoyable and fun packed as Talon's. I really recommend this book to anyone who loves a good romance, with a lot of action and Greek and Cetic gods messing with people's lives. It's one of the best books I have read and one of the on
Trustpilot
Copyright © 2022 Thriftbooks.com Terms of Use | Privacy Policy | Do Not Sell My Personal Information | Cookie Preferences | Accessibility Statement
ThriftBooks® and the ThriftBooks® logo are registered trademarks of Thrift Books Global, LLC