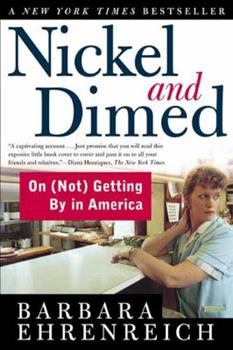 Nickel and Dimed: On (Not) Getting by in America

The "New York Times" bestseller, and one of the most talked about books of the year, Ni"ckel and Dimed" has already become a classic of undercover reportage. Millions of Americans work for poverty-level wages, and one day Barbara Ehrenreich decided to join them. She was inspired in part by the rhetoric surrounding welfare reform, which promised that any job equals a better life. But how can anyone survive, let alone prosper, on $6 to $7 an hour? To...

Published by Thriftbooks.com User , 12 years ago
If one can say she enjoys a book about other people's difficult lives, then, yes, I enjoyed this book. It brought me up to date on what it's like to be truly poor. I haven't been in that situation since the late 1970s when I had to live on AFDC because I had two little kids and was in business school, training to become a court reporter. It was tough but doable, doable because health care and child care were paid for by the State of Iowa as part of AFDC benefits. My check for about $380 a month was considered 80 percent of need. Rent was about $180 a month, and $150 worth of food stamps cost around eighty to a hundred bucks (which I could never afford). I bought all my clothes and furniture at secondhand stores and made all my food from scratch - no convenience food items at all. I saved enough so that about once a month I took the kids to McDonald's to "eat out." And I had one credit card for a local department store, on which I charged one bottle of perfume once a year. Other than that, I used no credit. It wasn't a bad life. I learned how to live frugally and fairly well. But then I did have the advantage, as I said, of subsidized health and child care. Without that it would have been difficult, if not impossible, to make it. In today's world, I probably wouldn't make it as well as I did then. I feel a real affinity for those who are trying to survive on minimum wage. It would be good if everyone read this book to get at least a basic understanding of what it's like to live at the edge of life. Very tough. Thanks, Barbara Ehrenreich, for an enlightening book.

Surprised How Much I Enjoyed, and Was Alarmed/Saddened By, This Book

Published by Thriftbooks.com User , 13 years ago
I wasn't inclined to be head over heels for N & D because it's an avowedly political take and the author's views are a lot further left than my own (that was the case when I first read this in 2002 and I don't think she's more conservative, or I'm more liberal, today), but the subject was interesting to me so I began reading a copy at my local library. I ended up reading the whole thing in a day, then re-read it, and then bought my own copy. The subject of poverty in this country is one that most people don't like to think about or are left throwing up their hands in despair over its intractability, and indeed there aren't any sweeping solutions to the poverty crisis in this book--what an interested reader will get is A) that there IS a genuine crisis, and one that's only gotten much worse in the face of the current brutal recession and B) what it feels like to work long hours for little pay in a country that does nothing to ameliorate these effects and much to magnify them. The book sides with labor and makes few efforts to present management as more than petty tyrants and/or slobs, but it's hard to sympathize with anyone other than the men and women (mostly women) who do so much and receive so little in return. The author clearly likes the women she's doing her undercover work alongside, and so did I. The details are clear and sharp, the logic is impeccable, and whichever way your policy wings spread it cannot be denied that this is a superb work of investigative journalism. 5/5.

Published by Thriftbooks.com User , 13 years ago
I didn't grow up with much money and I know how hard it can be to get things started which is one reason I wanted to read this book. It's a facinating read about a woman who travels around and tries to live off lower paying jobs. Sure, she's doing it to write a book and devise a social study, but, boy, does what she writes resonate. I can't say enough good things about this one. If for nothing else, read it for the story of her and the vacuum cleaner, when she works as a maid. It was hilarious! This is a good read, as well as----Fast Food Nation.

Inside experience of the agony of minimum wage

Published by Thriftbooks.com User , 14 years ago
The most unsettling aspect of Barbara Ehrenreich's eye-opening foray into the world of the working poor is that the situation hasn't improved. In fact, it's gotten worse. The U.S. economy was booming in the late 1990s when she began her project, working anonymously in various minimum-wage jobs and reporting about the experience. Though she steps in and out of the lives of the minimum-wage workers who befriend her, she is a very powerful, effective advocate for them. In her book, she shows that living decently on about $7 an hour (still the minimum wage in most states) is impossible. However, Ehrenreich gives it a try in three cities, working as a waitress, housekeeper and Wal-Mart clerk. She reports from the front lines, where the working poor eat potato chips for dinner and sleep in fleabag motels, and she does the same. She finds that minimum-wage workers lead a dreary existence, toiling away in obscurity day after day with little hope, just getting by as long as they don't fall ill, need dental work or get in a car wreck. The terribly sad part is that many see no light at the end of the tunnel. getAbstract finds that Ehrenreich is a gifted writer with keen perceptions and a wry sense of humor. Her narrative flows effortlessly as she enlightens, educates and entertains. If only she had a magic wand.

Published by Thriftbooks.com User , 21 years ago
I found Barbara Ehrenreich's book particularly fascinating because it overlapped my own experience--as a chambermaid, a nanny, a transcriptionist, a retail sales clerk, and even, to some extent, as a technical writer (work which is said to require a college degree but in fact does not). Except for the chambermaid's job which I held one summer in college, all the rest of these ( & several other jobs I won't mention) were my lot as out-of-work college professor in the years of the so-called Reagan prosperity. Like Ehrenreich, I, too, had a Ph.D. (mine was in English) and expected that my philosophical view of the world, analytical skills, and advanced vocabulary would draw attention to me as a person educated beyond the requirements of the job. In fact, these qualities were invisible to co-workers, customers, clients. Like her, I became a "girl" whose image for others was shaped by the preconceptions they had about the job and what kind of person would be working it. Anyone who thinks the patriarchy is dead (brought to the mat by Women's Liberations) need only take a job in any field dominated by male managers, entrepreneurs, or professionals. I could only be grateful that I was too old to be subject to sexual harassment, but the psychological put-downs know no age limit. I most identified with Ehrenreich's initial fear that someone would notice she didn't quite "fit in" with her co-workers and must be (as she in fact was, I wasn't) some sort of spy. Her relief and chagrin when no one noticed, when in fact she became as invisible as her co-workers, were emotions I shared. After all, I needed to be working and I didn't want to "stand out"! Though her approach to her self-assigned task is one of apparently total candor, the one thing Ehrenreich does not mention that makes all the difference in the world is that one is WRITING IT DOWN. In my case, I kept a journal throughout my working life and on my last job, as a retail manager, wrote 120 poems about my experiences. Knowing that I was going to write it down gave me a means of transcending the almost-daily humiliations, which, coupled with the physical exhaustion of some of these jobs (not to mention the boredom) would be enough to bring some people to the brink of suicide. I'm sure that Ehrenreich often had the experience, as I did, of looking gleefully at some stupid person who had just tried to "put her down" (like the woman who chided her while she was scrubbing a floor on her knees) because this person had just provided her with a choice bit for that night's journal entry and, ultimately, in her case, for her book. In fact, I believe Ehrenreich would agree that the chief virtue of an education is that it gives you the skills you need to analyze what is happening to you and write it down. This is your means to transcendence and in her case at least, triumph. I've no doubt that her book will make a difference in the lot of working women in America, and, believe me, the

Nickel and Dimed: On (Not) Getting By in America Mentions in Our Blog 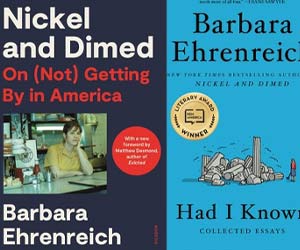 Barbara Ehrenreich never tired of asking the tough questions. The journalist and activist, who passed away on September 8, was the author of more than twenty books and dozens of articles and reviews. Learn about her life and legacy.