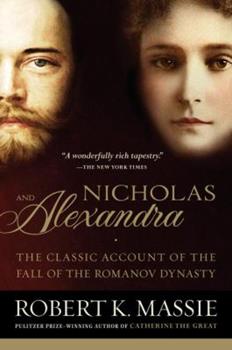 Nicholas and Alexandra: The Classic Account of the Fall of the Romanov Dynasty

(Book #3 in the The Romanovs Series)

A "magnificent and intimate" (Harper's) modern classic of Russian history, the spellbinding story of the love that ended an empire--from the Pulitzer Prize-winning author of Peter the Great, The Romanovs, and Catherine the Great "A moving, rich book . . . [This] revealing, densely documented account of the last Romanovs focuses not on the great events . . . but on the royal family and their evil nemesis. . . . The tale is so bizarre, no melodrama...

Published by Thriftbooks.com User , 18 years ago
I started a love affair with European royalty while in junior high, and as luck or fate would have it, Robert Massie's Nicholas and Alexandra was published during this time. I was bitten by the Romanov bug and have suffered from this malady ever since. Nicholas and Alexandra, the last Tsar and Tsarina of Imperial Russia, came from a distinguished royal pedigree. Nicholas was the son of Tsar Alexander III, and his aunt was Princess Alexandra of Wales. Alexandra was a Hessian princess and granddaughter of Queen Victoria. As youngsters, they fell in love and "Nicky" knew that "Alix" was fated to be his bride. Theirs was a true love match at a time when royal marriages were arranged for any reason but love. Two events conspired to cause the Romanov tragedy. First, Nicholas was not a very strong-willed man. He let others dominate him (including his wife). When his father died suddenly at the age of 49, the young Nicholas was totally unprepared and untrained to be Ruler of all the Russia's. Second, Nicholas and Alexandra were very family oriented, and it was a crushing blow when their 5th child and only son was born with hemophilia. In desperation, they alienated much of Russia (to protect this secret) and fell under the harmful influence of Rasputin. Russia was ripe for revolution, and Nicholas and Alexandra were too blind to see what was happening in their own country until it was too late. Massie does a stellar job of bringing Russian history to life in a way that reads like a novel. He also writes with a passion born of experience. When his son was born with hemophilia, Massie started researching how hemophilia affected the royal houses of Europe-especially the Romanov's. He details not just Russian history, but the history of this dreaded disease including various types of hemophilia, treatments, new advances, etc. The only negative about this book is in the timing. Massie wrote what was known in the late 1960's. But since the fall of communism and perestroika, we now know so much more about what happened to the Imperial family. Massie took this new information and finished the story in The Romanov's: The Final Chapter. One book should not be read without the other. Nicholas and Alexandra is one of my favorite nonfiction books, and I find myself rereading it every five to six years or so. I enjoy it just as much with each subsequent reading. My original paperback was in such tatters that I finally treated myself to a new hardback copy. Even after all these years, the tragic fate of the Romanov's continues to haunt us.

Fascinating look at a bygone era.

Published by Thriftbooks.com User , 21 years ago
This is generally considered to be the definitive biography of Tsar Nicholas II and his wife, Alexandra. Massie's expert storytelling is well-suited to the compelling story of the last Russian tsar and his consort. The history of Russia was no doubt changed by the deliberate myopia and general inadquacies of these two people. Nevertheless, Massie manages to uncover a more sympathetic side to the ill-fated duo. Massie's writing is as good as that of any acclaimed novelist - there's a fascinating and fastpaced plot, finely nuanced lead characters, an intriguing supporting cast, all against a beautiful background of a majestic bygone era.This book was researched and written before the fall of the Soviet empire when the state archives were opened and new information about the Romanovs was revealed. Consequently, this book is necessarily incomplete, especially as concerns the execution of the royal family. Massie has since written another text called "The Romanovs: The Last Chapter" which devels deeply into the newly available data and the forensic studies that followed. Consider it an essential volume II to "Nicholas and Alexandra".

Published by Thriftbooks.com User , 22 years ago
When this book first appeared in 1967, nothing anything like it had ever existed before. There were the original emigré accounts, most of them written in the 1920's and 1930's, which contained personal memories of the last tsar and his family from many points of view. There were the other historical sources which gave, for example, descriptions of Russian and European society in the time of Nicholas II, along with depictions of the cataclysmic events of war, revolution and regicide. The real brilliance of Robert Massie's "Nicholas and Alexandra" lies in the fact that he was able to weave these far-flung historical narratives into an intensely readable and informative whole, in the process resurrecting the last tsar and his family from the murky mists of time which had made them all but vanish from the attention of the world. A whole Romanov industry exists today, producing several new books on this tragic family every year. The public's fascination with this field, however, must surely be traced back to Massie's astonishing "Nicholas and Alexandra." It is a work of nearly faultless scholarship, fidelity to historical sources, and deeply moving human interest. It is unthinkable that one should let one's life pass by and leave this book unread. Get yourself a copy, loan it if you must, but don't ever let it stray forever from your shelves. It's that good.

Published by Thriftbooks.com User , 23 years ago
Robert K. Massie's account of the last days of tsarist Russia is intelligently written. Even if one is not historically inclined, one will automatically find onself drawn to this tragic tale. The book is so desciptive that one is almost lead to believe that Massie himself witnessed every event. If I must add any criticism of the book, it would be that Massie overestimates the the influence that Rasputin had on the fall of the Imperial government. It is true that Rasputin helped hasten the government's downfall , but it would have fell nonetheless due its subjection to a weak ruler and his neurotic wife. In all fairness, I must say that this minor point is not enough to dissuade me from giving it five stars. It is a must read for all those who love history, especially Russian history!

History doesn't get much better than this!

Published by Thriftbooks.com User , 24 years ago
Most book lovers have a little list of super-favorites that they turn to year after year, and this classic by Robert Massie has been on my list for more than two decades. Massie brings the last years of the Russian Imperial court to astounding life, turning meticulously researched detail into a tapestry more compelling than fiction. You feel you've been there and met the Romanovs and the people around them, walked their halls, ridden in their trains, even faced their final terrors. Its as good as stepping into a time machine. How many times have I looked up from this paperback (I've gone through several copies over the years) and found that I've lost track of time. Recently, several lavishly illustrated books have come out with long-hidden photos of what NICHOLAS & ALEXANDRA describes -- gorgeous though those photo books are, they do not give you as powerful a sense of time and place as Massie's exceptionally readable prose. Details of Russian history, which could be ponderous for most readers, become lively and engrossing here. I love history, and no book in the genre pulls me back as often (or with as much satisfaction) as Massie's NICHOLAS & ALEXANDRA.
Trustpilot
Copyright © 2022 Thriftbooks.com Terms of Use | Privacy Policy | Do Not Sell or Share My Personal Information | Accessibility Statement
ThriftBooks® and the ThriftBooks® logo are registered trademarks of Thrift Books Global, LLC