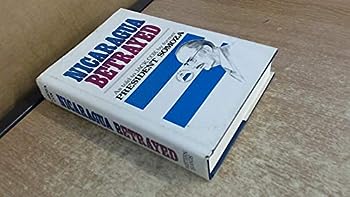 by Anastasio Somoza and Jack Cox

Nicaragua Betrayed, by Somoza, Anastasio This description may be from another edition of this product.

A Powerful and Truthful Book

Published by Thriftbooks.com User , 12 years ago
I first read NICARAGUA BETRAYED more than 25 years ago, and it really opened my eyes to the often filthy power politics played by Washington and by some of our Presidents, such as the (in my opinion) diabolical Jimmy Carter and covered-up skillfully by the Liberal mass media. Though President Somoza writes (wrongly) glowingly of himself, this book is an eye-opener because Somoza names names, dates, instigators, what they did to help the communists, who helped the communists (including Jimmy Carter, knowingly so) and a wealth of information which can easily be verified through U.S. Government documents which are not classified. I verified many of the claims myself using the Government Documents repository at the U of M library in Miami. Somoza tells the truth about Carter and his obscene involvement in the handing over of Nicaragua to a communist dictatorship. I highly recommend Nicaragua Betrayed. You will never look at American politics and foreign affairs the same way again after reading this powerhouse of a book.

Published by Thriftbooks.com User , 13 years ago
I was born in Nicaragua but was literally plucked from my homeland 23 days after the supposed "triumph" of the Sandinista Government led by the man who raped his own daughter and serves as current "democratically elected" president of my homeland. I have been raised in the USA, and have been trying to seek truth and understanding about who i am and what happened to my country. My family was very involved in the military and thus i know one side of the story well. As I have grown up in the USA, with the freedom of expression i would be denied in Nicaragua, i have been able to ask challenging questions about the accusations that my professors and classmates pose. My family accused me of being brain washed in college by leftist propaganda and pursuing answers in a Utopian fantasy that socialists or leftists seem to control. I have reached an answer. I have made my own conclusions from research and observations i have made. Jimmy Carter was a traitor to Nicaragua and even though i love the United States of America and consider it my home, i know that at any moment this government and any government in the world can chose to make someone disappear. I applaud the efforts President Reagan made to correct a mistake that Jimmy Carter made. This book helped answer many questions I had unanswered and help me reach the conclusions i needed to see or hear or read for my own. This book was banned in Nicaragua. It was banned by the communist party and its leaders, who are devout followers of Fidel Castro and idiotic followers of toad looking men who presume themselves honorable like Hugo Chavez. He accuses G.W. Bush of being an idiot (he's had his moments we, as US citizens cannot deny that), but clearly, this is the pot calling the kettle black. has ne not looked in a mirror? I recommend this book to anyone who is seeking truth. If truth is what you seek, you must look at both sides of the picture, and determine what the truth is going to be from your own perspective.

Published by Thriftbooks.com User , 19 years ago
I first read this book in 1985 and laughed my head off while reading it. Mr. Somoza does a brilliant job making all his opponents look like idiots & fools. The co author of this book Jack Cox who lost his life on the now infamous KAL plane that was shot down over Siberia in 1983 did a nice job editing. Somoza is correct that the Carter administration was working to unseat him. Moral to this story is The U.S. should never try to engineer the overthrow of a goverment be it a friendly or unfriendly one. Often as was the case in Vietnam in 1963 the cure is often worse than the disease.

It is a book that every Nicaraguan should read

Published by Thriftbooks.com User , 20 years ago
I highly recommend this book. It was banned by the communist government of Nicaragua during the 80's. Hence, very few Nicaraguan people now of its existence.This book provides a perspective of the environment taking place in that country during the late 70's. As well as the key reason for the falling of his government.This perhaps one of the few books on Nicaragua not written by a leftwing writer. It also serves as a good counterpoint to fantasy created by those socialist writers.