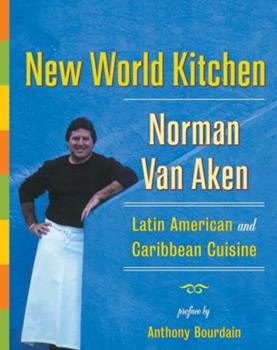 In New World Kitchen , Norman Van Aken explores the rich influence of Latin American cuisine on the American palate. From the African-influenced Creole cuisines of Cuba, Puerto Rico, and Jamaica to South American flavors from Brazil, Peru, and Argentina to the distinct tastes of Mexico, Van Aken works his particular magic on this luscious cornucopia and emerges with a wealth of brilliant recipes, such as the exquisite Masa-Crusted Chicken with Piquillo...

Published by Becky Lewis , 2 years ago
I've never had a cookbook I like more. I could almost cook exclusively from this book because Latin American cuisine is my favorite and Norman's recipes are amazing!

Published by Thriftbooks.com User , 13 years ago
Good cookbook, but a lot of recipes involve multiple stages such as sauces or stocks that are made seperately. Book was lost in mail and took 4 weeks for delivery.

Published by Thriftbooks.com User , 16 years ago
If this book was about latin american cuisine, I would give it four stars. The writing is great, and Chef Van Acken's philosophy (on food and life) is well worth reading. The recipes are feasible and delicious if executed correctly; something easy to do with some knowledge on food. I love this book, and go back to it often for inspiration, but it's still a book about New World Cuisine, and the Chef leaves his signature in every recipe, therefore the preparations are not authentic. I have given 5 stars to this book because I value Norman's input. He is a phenomenal cook and a creative chef. His food should not be missed when visiting Miami and his knowledge on the ingredients and techniques from Latin America is exceptional. I wish the book was longer, with more recipes and longer stories, as I truly believe this author teaches through his books. This is great book for the home cook and the professional alike. If you enjoy these recipes, and there's no reason why you shouldn't, then you will become curious about the food from my area of the world. For that I should always be grateful to Chef Van Acken.

Published by Thriftbooks.com User , 17 years ago
The multi-award winning Norman Van Aken of the restaurant `Norman's' in Miami has done us a great service by providing us this survey of New World Latin cooking plus a precis of the many influences which have borne on these cuisines. The geographic range of the recipes is truly impressive. The countries or regions to which the recipes are attributed are:Pan Caribbean 19 recipesPan Latin 19 recipesCuba 19 recipesMexico 18 recipesPeru 14 recipesBrazil 12 recipesColombia 9 recipesVenezuela 8 recipesNicaragua 5 recipes4 recipes: Argentina, Chile, Jamaica, Puerto Rico, Trinidad2 recipes: Ecuador, Guatemala, El Salvador1 recipe: Bahamas, Bolivia, Central America, Dominica, Martinique, Panama, UruguayThe book also includes several pantry, sauce, and mixed drink recipes not attributed to any specific region. The pantry recipes owe much to classic French technique, which Van Aken taught himself early in his career. The recipes for chicken and pork stock follow traditional methods, but they include a lot more ingredients than the French classics. Most notable additions are wine, mushrooms, tomatoes, and chiles.The large number of recipes from Mexico and Cuba are expected for a chef working in Miami, especially with the acknowledgments he gives to Rick Bayless and Diana Kennedy, our leading experts on Mexican cuisine. The emphasis on Peru becomes obvious when you see the references to Nobu Matsuhisa, who worked for many years in Peru and who has popularized many dishes based on Peruvian themes and foodstuffs.The sizable body of congratulatory blurbs on the back cover of the book from the likes of Nobu, Mario Batali, Charlie Trotter, Todd English, and Emeril Lagasse attest to the quality of his cooking and, more importantly for you the reader, the quality of his researches into this `New World Cuisine'. I think the most important quality of the book is not culinary invention. Van Aken is not taking any credit for creating these recipes. His accomplishment is in the collecting and exposition of these recipes and their most important ingredients for us.Van Aken is especially wise to not call this Latin American cuisine, as he makes it clear that the cuisine of the lands south of the Rio Grande have been created by an amalgam of Native American, Spanish, East Indian, Chinese, Japanese, African, Portuguese, Italian, and Polynesian influences. While Van Aken claims credit for inventing the phrase `fusion cuisine' it is plain that `fusion cuisine' has been going on in the New World since South American (Polynesian?) mariners carried plants from Pacific Islands to South America's Pacific coast. This activity expanded with a vengeance in both the old and new worlds as American foods such as corn, tomatoes, potatoes, and chiles were taken to both Europe and Asia and Old World foods came to America. For example, Italian and Sechuzen cuisines changed dramatical

Published by Thriftbooks.com User , 17 years ago
Just like the other reviewer wrote, this is the first cookbook I've read cover to cover in a while. It is extensive - you won't want for recipes on anything - from appetizers right through dessert and cocktails. It fits a definite void in my cookbook collection too - I have some 50+ cookbooks but nothing like this book. Nearly every recipe sounds delicious, and the writing is easy going and reflects the author's clear enthusiasm for cooking and Latin American/Caribbean food and culture. My only wish is for more photos. The ones included are beautiful, but I count only 32 (4 sections of 8 each). Still don't let that stop you from getting this captivating, unique cookbook that I'm sure will be a great culinary jouney for me, and become a classic in my library.

What a gem of a cookbook!

Published by Thriftbooks.com User , 17 years ago
This is the first cookbook that I have read cover to cover in quite a while. I ordered this along with about 5 other cook books, and of the order, this is the only one that I kept. The recipes are written clearly, my only qualm would be that some ingredients arent listed with other names that might be known be.. ie.. scotch bonnet chilis is the only name given, and to me, that isnt their most common name... nonetheless, the recipes so far have been a joy to make, I have only made two or three so far.. the nicaraguan salad, flank stank in red chimichurri sauce, and fried onions in cheese.. all were yummy, and I cant wait to try more.. this is definately a keeper of a cookbook!
Copyright © 2020 Thriftbooks.com Terms of Use | Privacy Policy | Do Not Sell My Personal Information | Accessibility Statement
ThriftBooks® and the ThriftBooks® logo are registered trademarks of Thrift Books Global, LLC