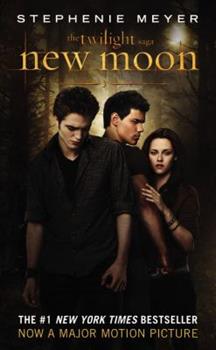 The #1 New York Times bestseller is available for the first time in a mass market paperback edition, featuring a striking cover based on the upcoming film adaptation. Passionate, riveting, and full of surprising twists and turns, this vampire love saga captures the struggle between defying one's instincts and satisfying one's desires.

Published by Cat , 2 months ago
Would’ve given 5 stars if the box the book arrived in wasn’t damaged

Published by Cathy , 4 months ago
Ordered one in good condition and received one with library bindings.

Published by Evana , 12 months ago
Got it and was in perfect condition! Even though I choose good condition.

Published by Jess , 1 year ago
Love the story, but the condition was terrible. There was mildew and smelt terrible. It was supposed to be ‘like new’ and I can tell it’s very old and wasn’t taken care of.

Published by Logan , 1 year ago
I ordered this book for $5 more than the usual price of the twilight books , mainly because it said very good condition, but pages are folded and torn , the first page in the book is almost torn completely. I bought it solely on adding it to my collection so I am not mad about the condition, but I just wish it was as it is described. But overall it is a book worth reading! The book itself is 5 stars but the condition is a 1. All of my others books came in better condition than they were described so I am very happy , and not mad.

Published by Stephanie , 1 year ago
New Moon wasn’t my favorite of the Twilight series when I first read it. But my opinion has changed over the years. Myers, captivates depression and longing beautifully.

Published by Chloe , 2 years ago
There are some marks on the cover but that’s because i didn’t get it new I was expecting it not to be as good quality as it was I thought there would be more stains and what not but not a lot I was surprised how good the book was I would definitely recommend buying this book!!

Published by Thriftbooks.com User , 13 years ago
Half way through the book and i can say that I am thouroughly enjoy it. The romance is there and the conflict is great. A very good read. I'm not the best at writing reviews but hope this is of some help.

Published by Thriftbooks.com User , 13 years ago
I felt for Bella when Edward left and seeing her best friend fall in love with her when she is so broken hearted is no easy. She only has a heart for Edward but Jacob is the best friend anyone can ever have. He is there to be her sunshine in the darkest time of her life.

Published by Thriftbooks.com User , 16 years ago
Life is far from normal for Bella Swan during her senior year of high school. True, her life is full of drama and boy troubles, but for Bella who sees herself as a danger magnet life holds much much more. Edward Cullen, her ever-handsome boyfriend who just happens to be a vampire, breaks her heart when he leaves after Bella receives a near-fatal paper cut at her eighteenth birthday party. Realizing that his family no matter how determined to avoid human blood, can within seconds be overwhelmed with tempation and violence leads him to place Bella's safety ahead of his own desires. To say that Bella is devastated is an understatment, she becomes zombie-like in her loss, a fact which is finally realized when Bella and one of her friends are watching a Zombie movie. "It wasn't until almost the very end, as I watched a haggard zombie shambling after the last shrieking survivor, that I realized what the problem was. The scene kept cutting between the horrified face of the heroine, and the dead emotionless face of her pursuer, back and forth as it closed the distance. And I realized which one resembled me the most. . . But it was ironic, all things considered, that, in the end, I would wind up a zombie. I hadn't seen that one coming. Not that I hadn't dreamed of becoming a mythical monster once--just never a grotesque, animated corpse. . . It was depressing to realize that I wasn't the heroine anymore, that my story was over." (106) But Bella's story is far from over. Reintroduce into the picture, Jacob Black, the young man who first shared with Bella the fact that she was falling in love with a vampire, this new friendship reenergizes Bella's existence and gives her a reason to continue on. But is her friendship with Jacob any safer for her than her relationship with Edward was? Or is Jacob hiding a dangerous secret of his own? Is Edward out of the picture for good, or will he make a comeback to try to reclaim her heart? Stephenie Meyer's novel NEW MOON, sequel to TWILIGHT, is an exciting read, and one that I highly recommend.