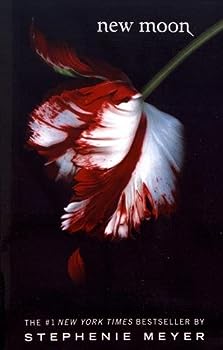 Published by Logan , 3 months ago
I ordered this book for $5 more than the usual price of the twilight books , mainly because it said very good condition, but pages are folded and torn , the first page in the book is almost torn completely. I bought it solely on adding it to my collection so I am not mad about the condition, but I just wish it was as it is described. But overall it is a book worth reading! The book itself is 5 stars but the condition is a 1. All of my others books came in better condition than they were described so I am very happy , and not mad.

Published by Stephanie , 6 months ago
New Moon wasn’t my favorite of the Twilight series when I first read it. But my opinion has changed over the years. Myers, captivates depression and longing beautifully.

Published by Lucinda , 1 year ago
This book is exactly the kind of escapism I needed during a stressful midterm season. However, the condition of the book I received was disappointing. Despite being labelled as being in "very good" condition, the outside had several stains and areas where the laminate was peeling off. The book was bent at an odd angle, and there were several areas where the pages had been deeply dogeared or torn. If I were to buy again, I wouldn't order anything less than "like new" to hopefully avoid some of these issues.

Published by Thriftbooks.com User , 12 years ago
Half way through the book and i can say that I am thouroughly enjoy it. The romance is there and the conflict is great. A very good read. I'm not the best at writing reviews but hope this is of some help.

Published by Thriftbooks.com User , 12 years ago
I felt for Bella when Edward left and seeing her best friend fall in love with her when she is so broken hearted is no easy. She only has a heart for Edward but Jacob is the best friend anyone can ever have. He is there to be her sunshine in the darkest time of her life.