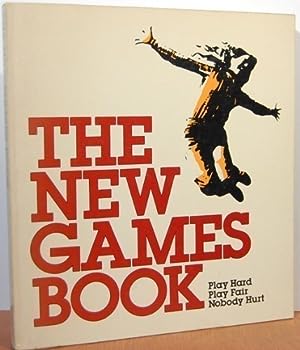 The New Games Book and its companion, More New Games, were resources developed for the "New Games" movement which began in the late 60s to encourage people to play non-competitive or friendlier games.... This description may be from another edition of this product.

Get up and move!

Published by Thriftbooks.com User , 14 years ago
Lots of both familiar and novel games. I've used some with Girl Scouts and they had a blast!

Published by Thriftbooks.com User , 14 years ago
This is a classic in the non-violent games genre. The photos are really groovy - this was the 70's, after all! - but the games are great fun. Good for community-building and cooperative learning.

Fun games, but much more

Published by Thriftbooks.com User , 15 years ago
I have used some of the games in this book with my preschool class and my own kids and enjoyed them very much, but I got a lot more than that out of it. It gave me a different way to look at how and why we play, and the possibility of playing or enjoying what I'm doing just for itself, not to impress or win. Reading the descriptions of the New Games events, I so wanted to be there. He describes hundreds of people getting together just to play. It is hard to describe, but here one example: the Earthball is a six-foot diamter canvas ball painted with the continents. The object is to push the ball to one end of the field or the other. Off they go, a hundred people pushing one way or the other. The interesting thing was if it got close to one end, the winners would defect and join the other team and push it back. The organizers would start a game, then hand the bullhorn to a spectator and put them in charge. People of all ages playing just for the fun and joy of it - what a novel idea. If I win a big lottery, I'm going to start some New Games tournaments.

Published by Thriftbooks.com User , 16 years ago
This book shows its roots in the late 60s, early 70s, and yet it still holds a great deal of originality. Stewart Brand reveals in the opening essay that he wanted to get hippies out of their heads, when they were busy protesting the war. So he organized a physical game, called Slaughter, where people had to work to pull (not push) each other off a mat. The games outlined in this book include some new, some old (British bull dog), and some that may have been new at the time but now are classics (Frisbee golf). Another aspect of this that seems dated is the attempt to bind in a book a lot of social practices that were evolving; it seems so compelling today to think of how much such a write up would benefit from being a web site rather than a paperback.

Published by Thriftbooks.com User , 22 years ago
This book is an excellent resource for anyone who needs to find activities for any size group. The choices of games are numerous and the activity level can be varied to suit the group. It's a wonderful example of of how games can be used for fun, and everyone is a winner because they can play to their own level of ability.
Trustpilot
Copyright © 2022 Thriftbooks.com Terms of Use | Privacy Policy | Do Not Sell My Personal Information | Cookie Preferences | Accessibility Statement
ThriftBooks® and the ThriftBooks® logo are registered trademarks of Thrift Books Global, LLC