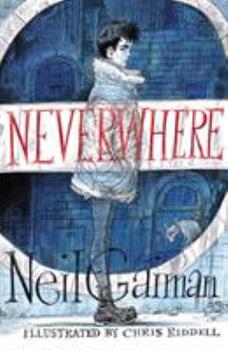 (Book #1 in the London Below, The World of Neverwhere Series)

National BestsellerSelected as one of NPR'S Top 100 Science Fiction and Fantasy Books of All TimeThe #1 New York Times bestselling author's dark classic of modern fantasy, beautifully illustrated for the first time by award-winning artist Chris Riddell, and featuring the author's preferred text and his Neverwhere tale, "How the Marquis Got His Coat Back."Published in 1997, Neil Gaiman's first novel, Neverwhere, heralded the arrival of a major talent...

Published by ViragoReads , 7 months ago
So I think I have a love/hate relationship with Gaiman books. Everything about them says I should love them, but 50% of the time I...well I don't hate them, but I also don't love them. This was another that I didn't love. It's fantasy, adventure, intrigue, and good narration (I listened and read along with my nook because I won't take my paper books on the bus.) It follows Richard, a Londoner who lives a fairly normal boring life with a very unlikeable girlfriend who seems to only want to control his every move. He gets mixed up with Door, who is from the London Under, which is the world beneath the regular world, the place where the people who fall through the cracks end up. After his first encounter with Door, rescuing her and helping her to get back to her world, Richard inadvertently becomes part of London Under. It's as if he doesn't exist in his world. So Richard adventures to London Under hoping to find Door and her guide the Marquis De Carabas. They are on a mission to learn who killed Door's family and trying to kill Door. Richard is hopeful that once their mission is complete there will be a way for him to fully return to his world. The story just didn't hold my attention. I couldn't get into it and was easily distracted from the story. The best and most interesting part was the short story of the Marquis and his quest to find his missing coat. It was just meh for me. Maybe a re-read at a later date will be in order

Published by GlæmingWounds , 8 months ago
Disappointed because I was sent the wrong cover... I specifically wanted it to match the other similar Gaiman editions I own. Doesn't seem like there is a way to exchange it though. :(

Published by Melly E , 1 year ago
I'm disappointed because I was sent the wrong version/cover of this book. However the delivery was good because it came fairly quickly .

Published by M Silver , 2 years ago
Eerie and well visualized

Published by Thriftbooks.com User , 3 years ago
I just received the book and the cover is well on its way out. Edges are torn and it's all bent up. Inside pages look fine after the first 3 or 4 but I'll have to put some fabric over the cover to keep it from falling apart.

Published by Thriftbooks.com User , 18 years ago
Everybody traveling in London by Tube, is familiar with the loudspeaker's warning "Mind the Gap", that is the space between platform and train carriage. Reading Gaiman, "gaps" take on a much more complex meaning... People can fall through the gaps/cracks, literally, not only down onto the rails but much deeper, ending up in "London Below". Richard Mayhew, a young man with nothing much happening in his life, is an unlikely Samaritan. Still, when confronted with a choice he follows his charitable instinct and assists a wounded rag girl he finds lying in the street. To save her from her apparent killers he goes on a quest and from this moment his life turns into a rollercoaster of discovery and danger. "Neverwhere" is a brilliant yarn of life in the underbelly of the city, with shady human characters, speaking rats and special "guides". There is more than one reality for sure. In London Above, Richard and the rag girl, named appropriately "Door", can be seen but not recalled beyond the moment. The real-life maze of London underground tunnels, hidden passageways and dead ends provide the existent, yet twisted, backdrop to the story. Time and distances have no meaning. The names of tube stations acquire new relevance: the Earl resides at Earl's Court, the black Friar monks are in Blackfriars and Islington is an Angel. Following Door and her unusual companions, Richard discovers the limits of his endurance. He has to question his existence and reality. While his desire to get back to his normal life keeps him going, his chances to shake loose from the shadowy underworld increasingly appear to diminish... The novel, which expands on Gaiman's successful tv production, is a great read, whether you know London or not (yet). His style is fluid and engaging, his characters are very much alive and moving the various layers of intrigue along at a good pace. [Friederike Knabe]

Published by Thriftbooks.com User , 20 years ago
Before he broke out full time into the world of novel writing Gaiman's reputation mostly rested on a relative handful number of comic books he had written, most notably (though not his best stuff) The Sandman series which showed his ability to toy with fantasy and myth to a near demented degree previously not expected for comic books. At best it was flat out amazing, at worst it was merely pleasant. Name recognition alone probably drove a lot of Gaiman starved Sandman fans to this book but fortunately it has much broader appeal as a contemporary fantasy. In this tale normal guy Richard Mayhew helps a stranger and winds up falling through the cracks into "London Below" a quasi-mystical world that coexists and yet can't be seen by "London Above". Now Richard, with a bizarre cast of comrades has to help the lady Door figure out how killed her family and what it all means, while dodging all sorts of unpleasantness that keeps popping up. The idea of a fantastic dark London overlapping the normal London isn't anything new (DC Comics' Hellblazer went over that concept all the time and "Midnight Nation" applies it to the entire US) but the key to a story like this is imagination which Gaiman has in spades. Every texture of the London Below feels real, and almost every page has some bizarre occurance or some off kilter social commentary disguised as fantasy coming from all sides. He has more good ideas than any man should possibly have and these ideas and his brilliant descriptions are what carry the novel, for the most part, you can read the whole thing like a travelogue and just become immersed in this strange and amazing world. The plot doesn't hold up so well and at times requires some dubious leaps of logic to connect two points together and for some reason, even though the whole story is executed brilliantly, the emotional center feels a bit hollow, most of the characters are painted with broad strokes and while I was incredibly interested in their plights, I didn't really care as deeply as I should have. Gaiman succeeds best when he's trying to darkly whimsical (most of the story), creepy (the scenes with Vandermar and Croup are sporadically effective, though the "ruthless killers who talk like Oxford graduates" has been done by everyone from Hannibal Lecter on down) or sentimental, which for the most part were the same problems with dogged the weaker Sandman stories. But his boundless imagination carries everything even through the slower moments when it just seems like one of those useless fantasy "Point A to Point B" quests and the ending is absolutely pitch-perfect, even though you suspect it's coming, watching him pull it off is definitely watching a genius at work. Gaiman fans will find this the greatest novel of all time of course (sorry, best fantasy novel is still "Little, Big", folks) others not exposed to him will find this an absolutely pleasant and quick read that immerses them in a world that if not for the danger (and hey

Down the rabbit hole into London Underground

Published by Thriftbooks.com User , 22 years ago
Alice meets the Wizard of Oz - and you'll never want to leave the underground.This was an amazing book! Living in NYC it made me really think about those random "dead ends" and the gap between the subway and the platform. (an idea that I am sure JK Rowling got from Neil...)I really wanted to visit the London Underground (and I don't mean the subway) after reading this delightful and absorbing novel. The characters were well written and memorable.This was one of the best books I have read in ages. I could not put it down and began to re-read it the moment I finished! Neil Gaiman not only has a fantastic imagination, he also has a great sense of humor and we are just so lucky that he has decided to share them and his amazing talent with us. I can't wait to read Stardust!If you read one book this year - read this one. A magical, mysterious romp in a world you can only hope really exists. My next vacation is going to be to London Underground. Pick this book up and I promise you will not want to put it down.
Trustpilot
Copyright © 2022 Thriftbooks.com Terms of Use | Privacy Policy | Do Not Sell or Share My Personal Information | Accessibility Statement
ThriftBooks® and the ThriftBooks® logo are registered trademarks of Thrift Books Global, LLC