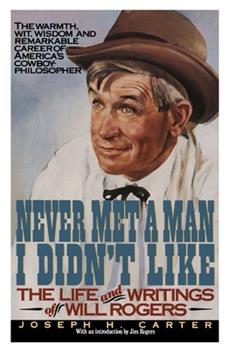 by Joseph H. Carter and Will Rogers

Will Rogers was America. Part Cherokee Indian and former cowboy, he captivated audiences around the world with sparkling gems of wisdom cloaked in gentle and uproarious country wit and astonishing rope tricks. His colorful life recently inspired a commercially successful and critically acclaimed Broadway musical -- winner of 6 Tony Awards. His words are as entertaining, inspiring and revelant today as they ever were. A simple, plain-spoken man, he...

Published by Thriftbooks.com User , 15 years ago
wish he was still around; maybe our government officials would read this & start to think for a change!!! well written

A solid introduction to a fascinating human being

Published by Thriftbooks.com User , 20 years ago
Although this book neither as a biography nor as an anthology of the sayings and writings of Will Rogers explores its subject in any depth, this is a very solid introduction to one of the most fascinating individuals in American history. As a biography, Joseph Carter manages to give an excellent, if brief, summation of the major events in Rogers's life. The last part of the book collects a number of Rogers's better-known sayings. This section is a bit more disappointing, since most of the excerpts are presented somewhat out of the larger context. Sometimes, this doesn't matter. But having read some longer pieces by Rogers's, I find that it doesn't enable the reader to get an adequate feel for the kinds of concerns that Rogers had as a political and social thinker.Rogers was a humorist, but concerns with political and social issues permeate his work. He was also an enormously complex thinker. Although there was a quaint simplicity and humility to the way Rogers expressed himself, he actually worked out a political position that wasn't entirely at home on either the Right or the Left side of the political spectrum. Although he was in most respects of liberal sympathies, he was almost libertarian in the way he yearned for a small central government that didn't intrude into the lives of everyday individuals. He was profoundly suspicious of big government. At the same, time, he was profoundly non-libertarian in being even more suspicious of big business and capitalism. His sympathies, however, were definitely populist.Rogers was simultaneously one of the most popular stage performers, movie performers, radio personalities, and political writers of his day, and arguably one of the, if not THE, most popular Americans ever to have lived. This excellent volume will provide the neophyte with a good introduction to all these aspects of Rogers's life and career.I do believe, however, that we desperately need a good, in-depth anthology of the writings of Will Rogers. I would love to see the Library of America bring out a volume dedicated to Will Rogers. Until they or someone else does this, I am afraid that Rogers will be remembered more as the author of pithy one-liners than as what he was: the most influential political commentator of his day.

Great book for reading-check it out!

Published by Thriftbooks.com User , 20 years ago
Excellent reading book combining both a biography and familiar quotations--and writings--from America's best-loved cowboy humorist who lit up the film screen and the radio airwaves during the Roaring 20s and the New Deal 30s. This is a great book for reading--stop by a local bookstore and check it out!

Great book about a great man.

Published by Thriftbooks.com User , 23 years ago
Every school library should have this book! Todays young people need to know about Will Rogers and this book tells it all in great style.

Published by Thriftbooks.com User , 24 years ago
After working on Broadway with the producers of "The Will Rogers Follies: A Life in Revue," Avon editor Mark Gompertz suggested I write this book. Lisa Considine was my inspired and inspiring editor. I divided the book one-half to biography and one-half to Will Rogers' own words. It has sold more than 82,000. Several newspapers and pundits gave it good reviews. Avon continues to print and stock the book. Beyond my position as director of the Will Rogers museum of Claremore, Oklahoma and the 400-acre 1879 birthplace and living history ranch near the tiny town of Oologah, I have spent most of my life as a newsman and speech writer. I invite comments about the book and will be happy to respond. If you buy the book and drop by the museum in Claremore, I generally am available to personalize your copy. The price offered here is the best bargain I have seen for the book. Thanks for your interest. Joseph H. Carter, Box 157 Claremore, Oklahoma 74018.
Trustpilot
Copyright © 2022 Thriftbooks.com Terms of Use | Privacy Policy | Do Not Sell My Personal Information | Accessibility Statement
ThriftBooks® and the ThriftBooks® logo are registered trademarks of Thrift Books Global, LLC