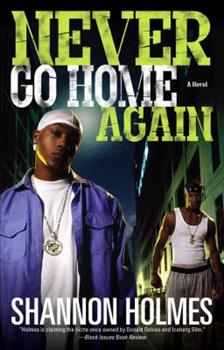 Corey Dixon's troubles start at home and, after a brief career in crime he finds himself being tried as an adult and sent to prison. Once there, he does his best to fight the horrific convict culture by latching onto a kind teacher named Mr Fisher, who takes the 16 year old under his wing. But to Corey's homesickness, Fisher has only one reply: he can never go home again and though Corey doesn't understand what his mentor means, he decides to go back...

Published by Thriftbooks.com User , 12 years ago
I thought that this book was a good read! Yes, "B-morecareful" was great as well, but I'm still waiting on the book "Cash"!

THiS BOOK HAS TO BE ONE OF MY FAVORiTES

Published by Thriftbooks.com User , 15 years ago
THE MAiN CHARACTER iS CORY..HE GETS iNTO ALOT OF BAD THiNGS.. AND THEN HE TRiES AND TURN HiS LiFE BACK AROUND... i DiD NOT LiKE THE ENDiNG BECAUSE CORY DiES!!!!!!!!!!!!! (HE GETS SHOT BY A BUNCH OF COPS...)

Published by Thriftbooks.com User , 16 years ago
Never Go Home Again was written outside of the norm. It tells a story of a young man named Corey who has a loving mother and father and is taught to do all the right things in life, yet somehow ends up doing the total opposite. This is not your everyday shoot 'em bang bang, thugged out novel. It actually shows the effects of the pure pressure thats placed upon our young men. Take Corey for instance. He had all the attributes to life that a young boy could have. He was taught to get an education and was taught how to be a man from a man - his father. Still, the pressures from his friends made him turn to something that would ultimately cause him more harm than good. This book is for every young boy. Not only for those that are lost, in jail, or failing in school, but for every young boy. I would also recommend it to anyone who believes bad kids only spawn from single parents. You'll change the way you think for good after reading this. Good job Shannon. Rolanda, Nothing BUT Page Turners Book Club

Should Be Required Reading In Middle and High School

Published by Thriftbooks.com User , 16 years ago
I became acquainted with Shannon Holmes' writing with his debut "B-More Careful". At first I thought Shannon was a woman because of the detail about how slick the women were in the book and also there was no picture on the back of the book to show otherwise. When I found out it was a man that wrote that book my respect level went a little bit higher for Mr. Holmes. Since then he has never disappointed me with any of his books. The same holds true with "Never Go Home Again". Shannon is not playing with this writing thing and his skills just keep getting better. "Never Go Home Again" is not your typical drug story where the male is from a single-parent home with nothing but the streets to take care of him. This book is written from the perspective of what happens to a large majority of our young black men. The main character, Corey, comes from a loving two-parent household but still gets caught up in the drug game. His parents are so busy working trying to provide a good life for him that the lure of the streets and pressure from his friends draw him in. Corey's mom and dad are not on dope, they don't beat him, and yet he still sees the fast money that can be made in the streets. You know that Corey is smart and was raised right but he just makes the wrong choices in life which lead him to an unfortunate end. This is a perfect example of people trying to raise a young black male in the best way that they know how but society says that their child's worth is different because of the color of his skin. All I have to say is I have much love for Shannon in writing this book and think everyone should read it. This book seems to be semi-autographical of Shannon's life from what I've read about him. The difference is that Shannon chose to make a change after being in the streets and in jail with something that he thought he would never do in a million years. He chose to pick up a pen and write about the circumstances of the inner city, what the characters do to survive, and give a message of how you'll end up if you choose to make the same choices. Keep up the good work Shannon. I'm ready for "B-More Careful 2".

Outstanding, one of the best books of 2004

Published by Thriftbooks.com User , 16 years ago
A strong, riveting and cautionary tale, Never Go Home Again teaches important lessons about the consequences of street life. With its cinematic feel, this novel easily persuades you to read page after eye-opening page until you race to the ending. The story involves Corey, a New York teen who becomes influenced by the wrong crowd. He's caught up in the game, and the decisions he makes greatly impacts his life. A wide range of convincing characters make up this story and each one of them is memorable and spring from the pages like they are commanding your attention. Shannon Holmes absolutely has his finger on the pulse of the realities of thug life; where disillusioned young men become trapped in a cycle of drug-infested darkness, and where ruthless killers and dealers know only one way of life. While reading I felt as if I was in prison, and I couldn't wait to get to the end, so I could escape, so I could breathe. The story is authentic, raw, and brutal, yet humorous in an odd kind of way. It's an important book that should be read by every young man and woman, and even their parents. The hardest thing to read is the dialogue; it's very street, lots of slang, and in one chapter, for some reason, Corey uses perfectly good English which kind of threw me off, but it wasn't a biggie. Nevertheless, I've read a lot of books this year, and Never Go Home Again ranks among the most impressive.
Copyright © 2020 Thriftbooks.com Terms of Use | Privacy Policy | Do Not Sell My Personal Information | Accessibility Statement
ThriftBooks® and the ThriftBooks® logo are registered trademarks of Thrift Books Global, LLC