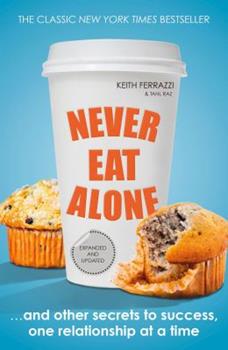 by Keith Ferrazzi and Tahl Raz

This description may be from another edition of this product. The bestselling business classic on the power of relationships, updated with in-depth advice for making connections in the digital world. Do you want to get ahead in life? Climb the ladder to personal...

A Book that Changed How I Look at the World

Published by Thriftbooks.com User , 15 years ago
Several people have asked my opinion about Never Eat Alone by Keith Ferrazzi, which I have listed in my "What I'm Reading" list. They find the title particularly intimidating, because it gives the impression of some sort of relentless networking approach, by which you can never just be at home by yourself. As many of the people I know are engineers and/or bookworms, this is a pretty intimidating concept! However, I liked this book a lot. It's not so much about the shallow networking that the title appears to imply. It's more about forming strong connections with people, and making the interactions that you have with people positive for both sides. It's about marketing, not selling. I think that it's a much better book than the title suggests. I would say that it's a poor title, but I think that the title catches people's attention and prompts them to ask about it. So it's actually a very clever title. I've found some of the ideas directly useful already, and I intend to read it again to jot down some more ideas. (I listened on MP3 while walking the first time, so I couldn't jot things down very easily.) In particular, the book contains a wonderful section about finding the intersection of what you're passionate about and what you're good at, and trying to do more of that in your life. He calls it your "blue flame." This helped motivate me to start my blog, after literally years of wanting to do something constructive in the area of children's books. The ideas from Never Eat Alone have influenced my development of the blog in another way, too. Since reading it, I find that I have opened up more in reaching out to people I know to tell them about what I'm doing. To tell them that this (literacy and children's books) is something that I really care about. I've written to people who I've known for a long time, but with whom I haven't had much recent contact. I've also written to people who I know through my work in the semiconductor industry, for whom this is a completely different side of me. I've written to new friends, who are just starting to get to know me. And of course I've written to my close friends and family members. And I have been just amazed and inspired by the outpouring of support that people from all of these groups have given to me and to this project. All in all, I highly recommend Never Eat Alone by Keith Ferrazzi, especially if you: Would like to feel more connected with other people; Are thinking of starting a new business; or Own your own business, but aren't that good at marketing. -------- A slightly longer version of this book review was originally published on my blog, Jen Robinson's Book Page, on December 21, 2005.

Shy people must read this book

Published by Thriftbooks.com User , 15 years ago
I just bought and read this book and I am already recommending it to my friends. I recommend it to you as well. Sometimes I feel like I don't have a smidge of social skills and I wonder if I ever socially developed beyond the age of 12. I know there are a lot of other people like me out there. Some people seem to look down on us. Thus, I became a successful technician. For all you other technicians, artists, writers and other wallflowers who just don't get how the other half can't patiently spend two days looking over a giant spreadheet for a mistyped formula, you should read this book. So, one day I was sitting alone in a crowded cafeteria reading "Never Eat Alone" ... Fellow quiet folk, take a look at how the other half thinks and acts (and it's all in a book so we don't have to actually talk to anyone.) Yes we actually were ignored on purpose, but as Ferrazzi explains - open up and be interesting if you want the social climbers to notice you. And then spend lots of time sending them cards and notes instead of wasting time doing the real boring nitty-gritty work. Grain of salt... Yes, Ferrazzi comes across strong, but he also comes across honestly. I certainly won't be trying to imitate his lifestyle, but I got a great view of how a purely social personality thinks - and a very successful person to boot. You may or may not like him, but you should study him. The same goes for Machiavelli. People chess... After reading the whole book I got a big picture view of how to network. I found techniques I could tone down and adapt. I learned some basic etiquette of Ferrazzi's world. I already feel much more comfortable with networking now that I have been given a little preview of the way it is supposed to work out. I find that fear of the unknown is one of the keys to making people shy - so buy and read this book. The grass is greener.... And by greener I mean money. Ferrazzi points out that many of the most powerful people are not the very smartest, but the very connected. You know the people who can take ten smoke breaks a day with the manager; they often get more promotions than the people who stayed and worked. I am a great user of the public library, but I do think Ferrazzi deserves to have every copy of his book in print purchased - he earned it.

Connect for the Joy of It All!

Published by Thriftbooks.com User , 15 years ago
Never Eat Alone is a rare, detailed glimpse into how those with no special access can connect to those they want to meet. For many people who are good at connecting, this activity becomes a way of life. It's a profession and a hobby. As such, connecting can become all consuming. Many will find that aspect of Mr. Ferrazzi's story to be unattractive. But I found his candor in this regard to be refreshing. If you step back from his enthusiasm for connecting, the mental attitudes and processes he describes are just what everyone needs to use who wants to be better connected and accomplish more. All of us know more than any one of us. If you take two equally talented young people in any field, the one who is better at connecting will live a more successful life than one who tries to go at everything as a lone ranger. I have known dozens of master connectors. They all do some variation of what Mr. Ferrazzi describes in this book. Here is how I would distill those lessons: 1. Decide who you want to meet to further your objective of accomplishing more. 2. Learn more about the person. 3. Find what you can do to help that person in an area where they care. 4. Develop a strategy to meet briefly face to face. 5. Share what you want to do to help when you meet. 6. Stay in touch with more ways to help. 7. Attend events where other master connectors attend and link into fields which are not naturally yours by becoming acquainted with these master connectors. 8. Study those who are very good at this. If you keep in mind the sheer pleasure of making a difference as you do this, you'll soon be a superb connector. I recommend undertaking this task on behalf of something you are passionate about such as a charity you support. One of the best parts of this book is that Mr. Ferrazzi is generous in sharing his mistakes. The world doesn't end for you as a connecting queen or king if you offend a poo-bah. You just pick yourself up and do better next time. I liked his humility about his limitations in other fields. Peter Drucker would have approved of Mr. Ferrazzi's decision to work on what he has a talent and love for, connecting, rather than try to become more competent at things that are difficult and unpleasant for him . . . like quantitative analysis. The story about how he got his start at Deloitte is worth the price of the book. Another strength of the book can be found in the excellent description of why people find President Clinton to be so compelling in person. Skip books about networking and relationship building. Read Never Eat Alone instead!

Not Your Typical Networking Book

Published by Thriftbooks.com User , 16 years ago
I'm a naturally shy person and I've always hated the concept of "networking." Everyone I know that practices it in the commonly accepted sense is a complete jerk. This book, however, addresses the true power behind networking; building actual relationships. I would probably give the book 4.5 stars, since too much of it is devoted to name dropping, but this small flaw does not detract from the value of the book. Mr. Ferrazzi takes the approach of building meaningful relationships with others, even when time is short. He doesn't advocate carpet bombing a room with your business cards or hanging out with people you despise as a means of getting ahead. I appreciate the fact that the author came from humble beginnings and was able to reach such heights in the world of business. There are several practical approaches that are discussed in this book that can be of help to both extroverts and the relatively introverted.
Copyright © 2020 Thriftbooks.com Terms of Use | Privacy Policy | Do Not Sell My Personal Information | Accessibility Statement
ThriftBooks® and the ThriftBooks® logo are registered trademarks of Thrift Books Global, LLC